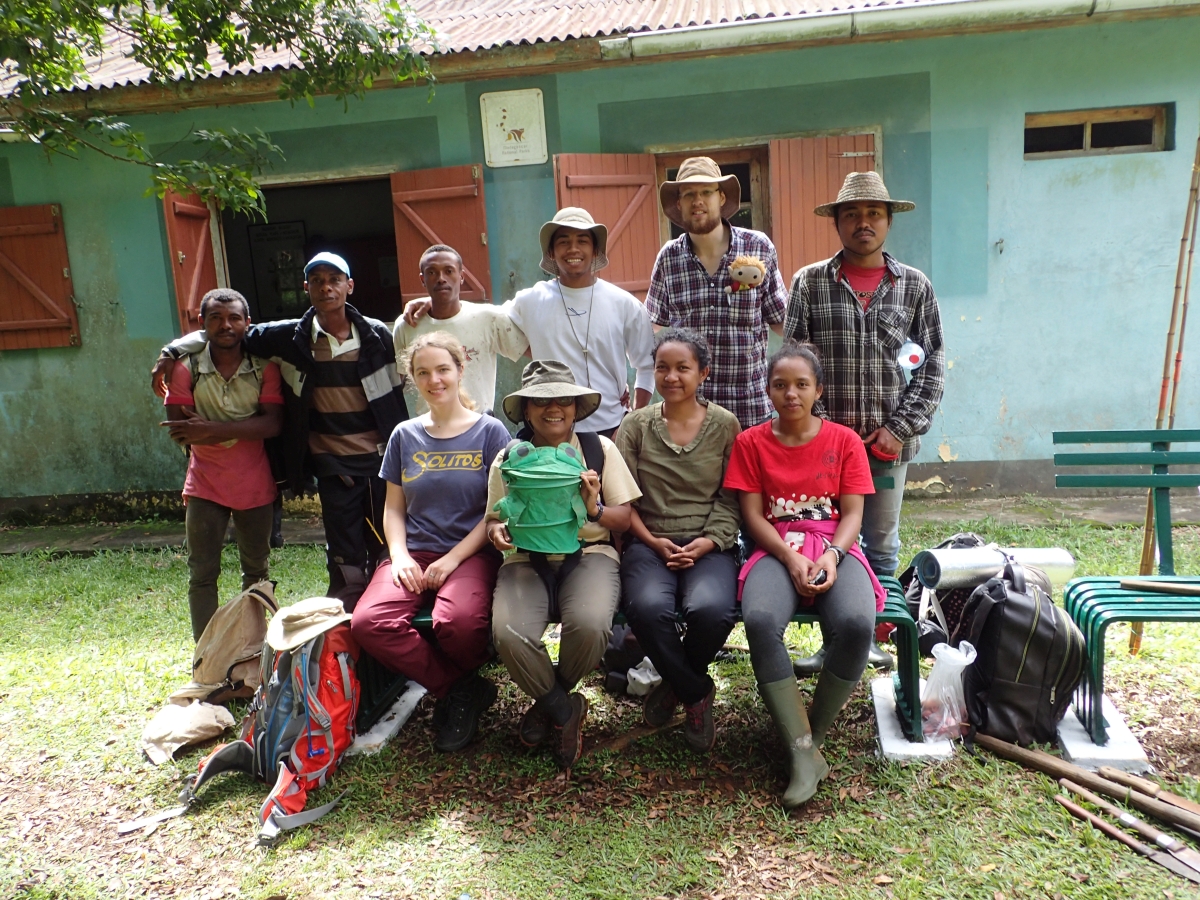 After two months in the forest, fieldwork in Montagne d’Ambre has now drawn to a close. On the 6th of December, we exited the forest in some haste (for reasons that will become apparent below), and over the next few weeks we will be working on getting permits and transportation arranged to get back to Antananarivo, and thence bring part of the specimens and tissue samples back to Germany.

The last few weeks were the hardest of this fieldwork season, and possibly the hardest time I have ever had in the field. After Christmas, we moved down from the Gite site at 1050 m above sea level to an area of forest around 680 m asl, where we intended to continue to sample as we had until this point, moving horizontally across the altitudinal band, swabbing chameleons and collecting new specimens/records. Our move to this site was somewhat overshadowed by the threat of encounters with illegal rosewood loggers, whose activity and presence in the forest was evident. We employed a small team of men from the local village to help keep the team and camp secure while we worked in this area.

As it transpired, none of our focal species were present at this site, nor indeed for 200 m above it, except for the frogs, and so the chameleon plan dissolved. We therefore focussed on the biodiversity sampling with some success, adding a few species to our inventory, and increasing the distribution of others. Work on the frogs by Safidy continued unabated.

Moving around the forest at 750 m

One of the largest rivers running off Montagne d’Ambre, tranquil before heavy rains

Large pill millipedes are common in the forest

Then, after New Year’s, the weather changed for the worse as cyclone Ava gathered strength in the Indian Ocean. It finally made landfall on the fifth on the East Coast (fortunately not the north, where it was originally headed), tracked southwards, and exited into the ocean again on the seventh, dealing considerable damage as it went. Although we were around 300 km northwest of Tamatave, where the cyclone hit at its strongest, we felt its effects: high winds and extremely heavy rain flooded part of our camp, turned the rest into a network of streams, and raised the water level of the near-by river by almost a metre. Tents were flooded, hammocks soaked, and, worst of all, some of the rice got wet. Far more damaging however were the psychological effects, with most of the team, and especially myself, losing a great deal of sleep for fear of falling trees and/or branches in the bad weather.

A selection of the rivers running through our camp. Photo by Ella Z. Lattenkamp

So on the fifth we arranged to be extracted the following day, and dutifully on the sixth a team of 23 porters showed up, and took our equipment with us out of the forest.

Our fieldwork on the whole went very well, and we are already in the early stages of planning the resulting publications. Since my update at Christmas we found over ten additional species, bringing us to over 90 species of reptiles and amphibians on the mountain, many of which are new to the park and several of which are probably new to science. Work on a paper describing the biological survey results from our fieldwork has already begun, so we may be able to publish some of our results already in 2018 (somewhat dependant on how quickly we can get the genetic side done). In any case, there will be an update here as soon as any results are published.

So from myself and the team, now safely out of the forest and trying to get back to Antananarivo in the face of many flooded roads and broken bridges, I wish you a happy new year, and look forward to sharing more of our results with you in the coming months.