In November of last year (2014), I spent a week in a rainforest in eastern Madagascar with the leading experts on Madagascar’s amphibians, chytrid, captive breeding, and conservation; ACSAM2 it was called, the second meeting to form an updated conservation scheme for the amphibians of Madagascar. As part of this meeting, a team of three or four other herpetologists and I sat down with Jennifer Luedtke of the Species Survival Commission of the IUCN to create conservation assessments for several recently described Madagascan frogs.

The difference in emphasis between Jennifer and ourselves was palpable. The scientists were interested primarily in data and accuracy. While the same things drove her, she had a very different perspective. To her, communication of the data is paramount; we must form reliable assessments, and those assessments must be accessible beyond the scope of scientific interest. They must appeal to the public. One of the key ways in which Jennifer and the IUCN try to do that, is through common names. As scientists, we often scoff at common names as inaccurate, loose, broad, and dangerous. But from Jennifer’s perspective, and that of the public, a common name is a point of access. Especially for young people.

Since these meetings, I have often thought back to what Jennifer said about the importance of common names. I have encountered individuals in the pet trade who made up idiotic common names for species that lacked them. It is dangerous for the species, and promotes misinformation. Having the scientists involved in the establishment of common names is, in my opinion, a happy and easy solution to the problem. Yes, more emphasis must always be placed on the scientific name, but a common name is helpful for communication of all kinds.

I have spent most of the last two years working on the resolution of the taxonomic status of a cryptic group of frogs from northern Madagascar. Relatives of a mysterious and poorly known frog endemic to the mist-covered peaks of Marojejy, these frogs are all relatively blandly coloured, terrestrial, and secretive. They are united in sharing a distinctive feature: small fleshy spines above the eyes. The Rhombophryne serratopalpebrosa group, they are called. A catchy name, no? No? You’re right.

The conventions for the establishment of common names vary between groups of organisms. The birds, for instance, have a set of ground rules. Australian fish have a committee. For amphibians and reptiles, things work a little differently: Frank and Ramus (1996) decided they would take it upon themselves to publish an authoritative guide to the scientific and common names of all herps. In doing so, they tried to eradicate the problem of duplicated common names for different genera. It was an ambitious and largely successful effort; this book still holds a lot of sway over the names we give to species.

This second point is what I want to focus on. Common names are often really stupid or inappropriate, and it is possible, with the correct outreach and education, to change that name for a more appropriate one.

An new species of Rhombophryne under description by me and my colleagues. Photo by Franco Andreone.

Now back to the boring brown frogs with silly little dermal appendages above their eyes; the R. serratopalpebrosa group:

Frank and Ramus (1996) listed the genus Rhombophryne with the common name ‘digging frogs’. And at the time, that was an appropriate name. Back in 1996, Rhombophryne contained just one species: R. testudo. This species is entirely fossorial, and has an extremely digging-adapted morphology.

However, genetic investigation (over a series of several publications) of Rhombophryne and another cophyline microhylid genus, Plethodontohyla, had a shocking revelation: Rhombophryne is a lot more diverse than previously supposed. Around half of the species previously assigned to Plethodontohyla  had to be transferred to Rhombophryne, and current estimates place its diversity at roughly 23 species. The result was a big change in the dominant ecology of the genus: The rest of the frogs in the genus were more terrestrial and less akin to the digging R. testudo. Indeed, it was not until 2010 that two species of frog that resemble R. testudo were described; until that point, ‘digging frogs’ was a name appropriate only for the type species of the genus.

Now, it must be said that all species of Rhombophryne are, at present, assumed to dig at least a little bit. They have non-feeding tadpoles that they deposit away from water, and that probably requires burrows for most of them (we just don’t know!). But characterising the whole genus as ‘digging frogs’ is, in my opinion, misleading.

So, as a result of taxonomic rearrangements, a formerly apt name has become at best inappropriate, at worst misinformative.

Clearly it is time to change it! Remember, there are no rules governing common names for reptiles and amphibians in English. But the question becomes, what do we change it to?

In September of last year I had an interview with a freelance journalist for Discover Magazine about the newly described Rhombophryne vaventy from Marojejy (note, the interview contains several mistranscriptions or mistakes). During the interview, I was pushed for a common name for these frogs. When I told the interviewer that there wasn’t really an appropriate one, he decided to go with ‘rhombus frogs’, as the obvious extrapolation from Rhombophryne (The Greek ‘rhombus’ meaning… rhombus, and ‘phryne’ meaning toadette—seriously, ‘phrynus’, the proper ending of toad, is masculine; phryne is feminine [a more appropriate translation might be ‘toadlet’, if the feminine is considered diminutive]—but toad being an inappropriate name for a group of frogs not in the family Bufonidae).

Diamond or rhombus? Both!

I am not a fan of the name ‘rhombus frogs’. Little more than I am with ‘digging frogs’. It’s boring. The frogs are boring enough themselves; we hardly need to make them still less interesting by giving them a dull name.

And so I set about trying to come up with a better name. This is not as easy as you might think. I fought for months with alternative names that were equally stupid. And then one day I sat down with Google Translate, and I said to myself ‘Hey, let’s translate this all again’. I typed ‘Rhombus’ into the translator, set the source language to Greek, and what do you know, it spits out ‘rhombus’ on the other end. So I clicked the word to try alternative translations, and a list pops up: rhomb. a rhombus. lozenge. diamond.

It was only at this point that I realised that diamonds are rhombus shaped; that any shape that is a rhombus is also commonly referred to as a diamond, due to the suit in playing cards. A quick Google revealed that the name ‘diamond frogs’ was not taken by anything but jewelery (of the tackiest and yet most alluring kind to the romantic herpetologist), and suddenly I had my common name:

How befitting, that the common name of the animals should be the common name for the shape after which the animals are named (rhombus -> diamond; Rhombophryne -> diamond frog); etymologically, the name fits. Morphologically, the frogs are indeed roughly diamond shaped. They are also brown and not exactly exciting; the perfect analogue to a ‘diamond in the rough’. And it appeals more to the masses; nobody is going to perk up with you talk about ‘digging’ or ‘rhombus’ frogs, but mention ‘diamond’ frogs and you have my attention. 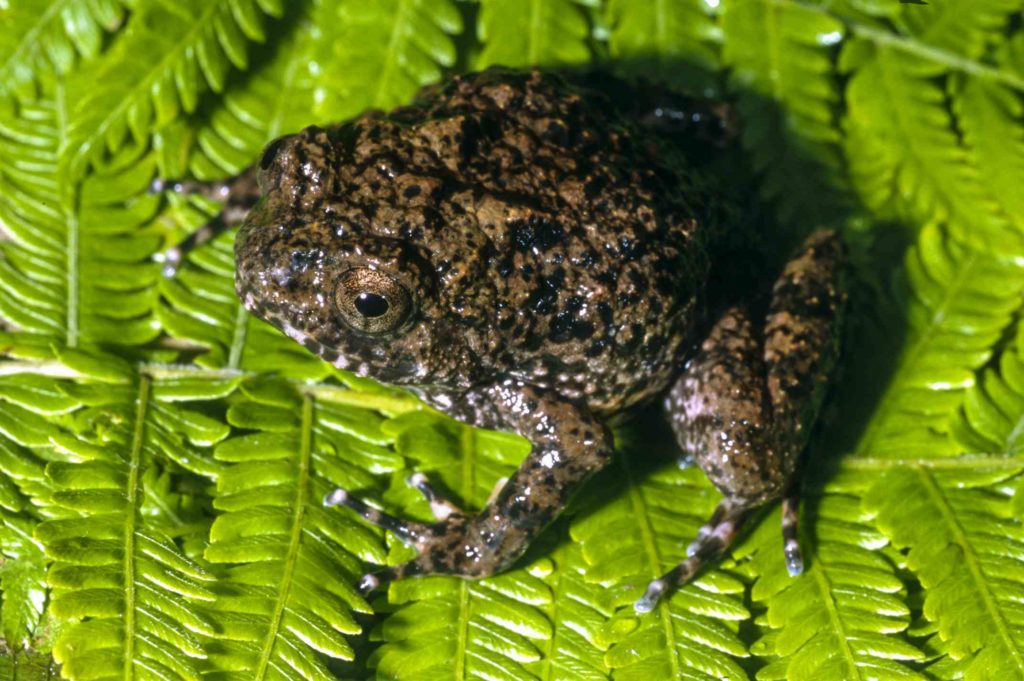 And thus it is that we made it from digging to diamonds.

An apt and appealing common name can literally mean the difference between the survival and extinction of a species. Karaffa et al. (2012) showed that an engaging name meant more interest in conserving the organism belonging to it. It is clear that taxonomists should be thinking about more than just the science of naming species, but also their conservation. We are increasingly including preliminary IUCN Red List assessments in our descriptions; adding a common name seems like only a little bit of work for a very measurable improvement in the conservation of the species (but see Morgan D. Jackson’s take on this issue here).