Appearing today (30th October 2017) in the Open Access journal Salamandra, my colleagues Andolalao Rakotoarison, Miguel Vences, Frank Glaw, and I have a paper published detailing the rediscovery of the enigmatic genus Madecassophryne in the Anosy Mountain chain in southeastern Madagascar; you can get the paper here!

In December 2016, we sent our colleague Andolalao Rakotoarison along with expert herpetological guides Emile Rajeriarison and Jerison William Ranaivosolo on an expedition to search for a long-lost frog that turned out to be one of the toughest expeditions any of our group has been on in the last 20 years. The goal was to find Madecassophryne truebae, a species described in 1974 by Jean Guibé from specimens collected in the same locality by Charles P. Blanc in 1971. 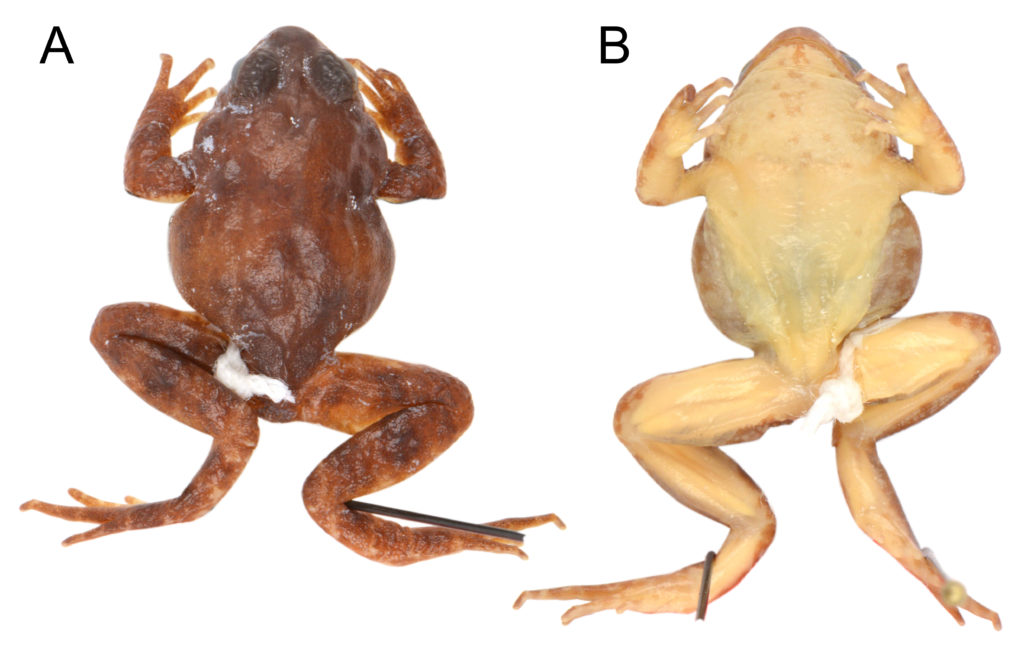 The holotype of Madecassophryne truebae. Fig. 1 of the new paper; photographs taken by A. Ohler.

Since its discovery, M. truebae has remained something of a mystery. It is the only member of its genus, and although it is clearly a microhylid frog, it does not clearly resemble any other species of the subfamily Cophylinae into which it was placed by Guibé (1974). What is more, only very few specimens of the species have been reported since its original description, some collected in Andohahela National Park south of the original location (among the few with photographs that seem to agree with this identification), others apparently found in lowland areas close to the coast, and even one record from over 600 km away in the east of Madagascar! These finds are sometimes accompanied by specimens, less frequently accompanied by photos, and never associated with genetically useable tissue samples. The species really remains enigmatic.

As dedicated readers of the blog will be aware, one of the very active areas of research we are working on is the taxonomy and evolution of the cophyline microhylids (e.g. these posts: [1], [2], [3], [4], [5]). Figuring out the relationships of Madecassophryne is a key missing part of the puzzle. So it was determined that Ando, at the time a fellow PhD student (since graduated!) at the Technische Universität Braunschweig in the Vences lab, should go and try to find this frog. I had extracted coordinates from the original collection trip of Charles P. Blanc thanks to the excellent map of the area provided in the expedition report (Paulian et al. 1973), and based on these, and the notes Blanc provided along with the collection of the specimens, a route could be approximated that the team would have to pursue. 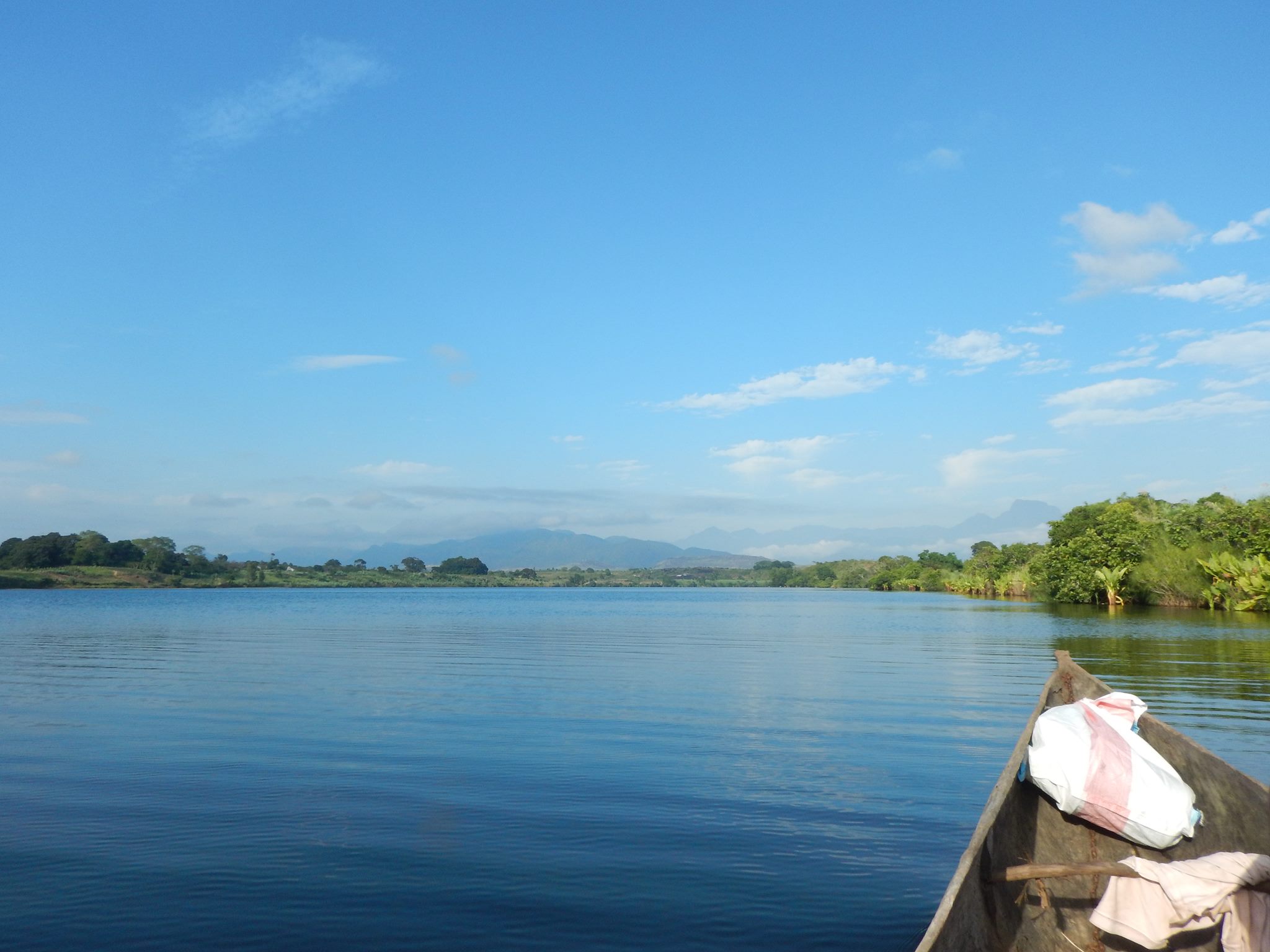 The view from the canoe heading from Manantenina to Analamary. Photo by Andolalao Rakotoarison, used with permission. 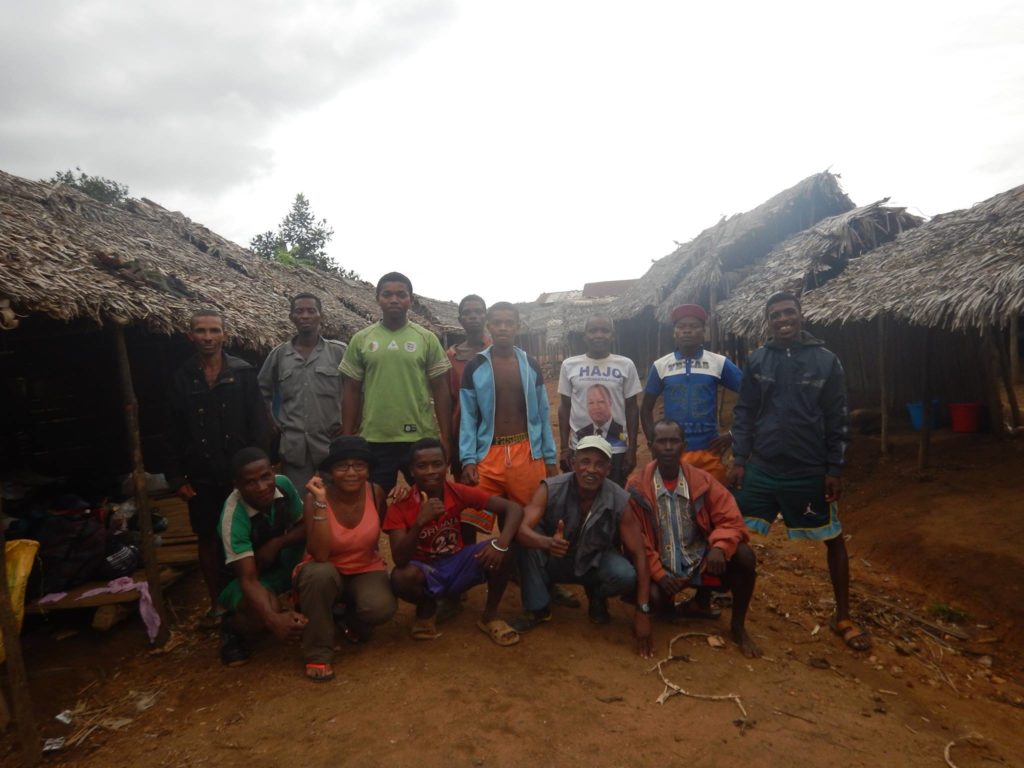 The expedition proved to be a rough one. Ando travelled down to Fort Dauphin by plane, but then had to get to the town of Manantenina, 90 km to the north, where she then got on a canoe to travel up river to get to Analamary, and then almost two days’ hike several kilometres in the blazing sun before reaching the forest edge. Once there, they began attempting to ascend the mountain, for Blanc’s notes indicated that M. truebae were found toward the peak of the mountain. This proved impossible by the route they had taken, and as time was running short for the expedition, they had to search where they could access. They encountered vertical rock walls covered in dripping water and moss, and here, as luck would have it, they found specimens of Madecassophryne. Here is paraphrased quotation of the frogs as described to me by Ando while she was on her way back from the field:

‘It’s really like Mantidactylus but calls like Rhombophryne. There was a lot of confusion in the description in the field, but the information from the MNHN document helped a lot because it said moss. We got one specimen and Rajery said it was Mantidactylus and I said ‘no way’ because I found them in a hole in the rock covered by a lot of moss. They are not really similar to Mantidactylus; the size and face shape are different. Solo found one and he said it was Rhombophryne because the call is so similar. There was no way to observe them calling because they were doing it from deep inside the rocks, but the one that I could get the recorder really close to I could not see the vocal sac, so I am not 100% sure that it was the calling male, as there were two in the same hole. But I am 100% sure that it was the call of Madecassophryne,  because only Mantidactylus lugubris was present around and its call is not the same. The habitat was super wet because its a kind of rock wall with waterfalls. The recorder broke because of the wetness.’ 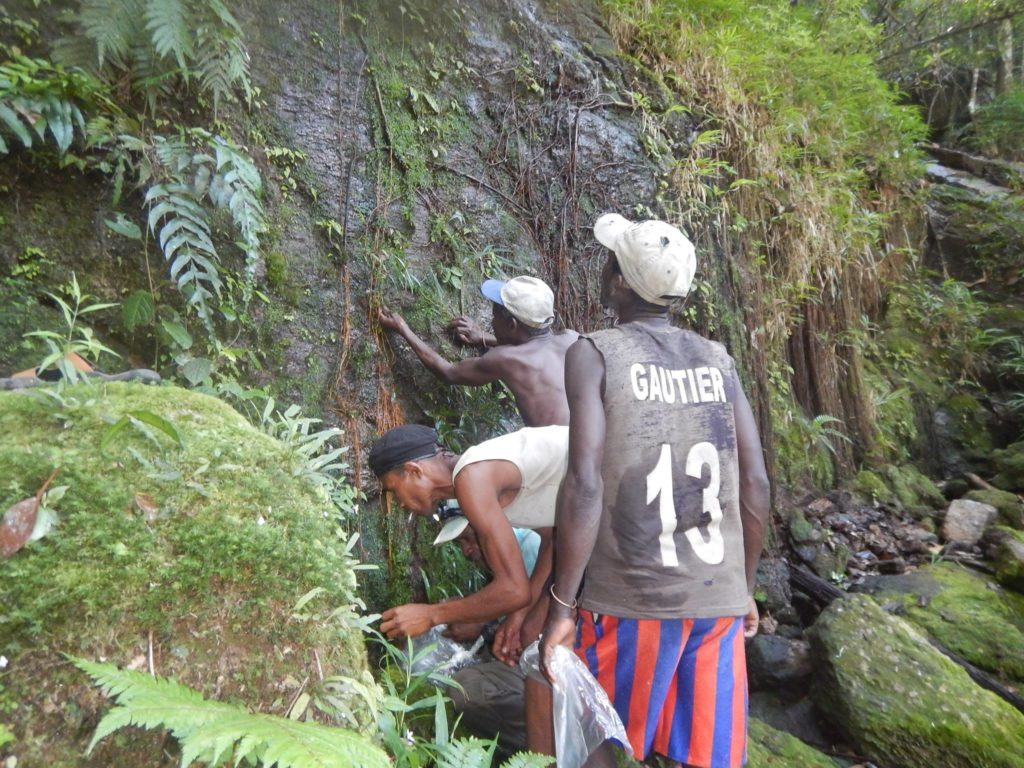 The guides searching for Madecassophryne in a moss-covered, dripping cliff face. Photo by Andolalao Rakotoarison, used with permission.

So, disappointed because they were not able to reach the high-altitude type locality of Madecassophryne truebae, but nevertheless elated at having collected a frog that resembled it more than any other frog known from Madagascar, the team returned. On the 19th of December, Ando wrote to us:

I am died. It was really hard but I got your Christmas present.
More in Fort Dauphin.

The new paper outlines not only the trip to rediscover the frog, but also our analysis of the morphology of the specimens collected by Ando in comparison to the type series of M. truebae, and an analysis of the phylogenetic position of the frogs based on sequences from a fragment of a mitochondrial gene. Our results from analysing the morphology of the new specimens in comparison to M. truebae suggests subtle small differences, including considerable size differences, but at present this is unconclusive and, regrettably, more specimens from high altitude are needed to confirm whether or not these are the same species. 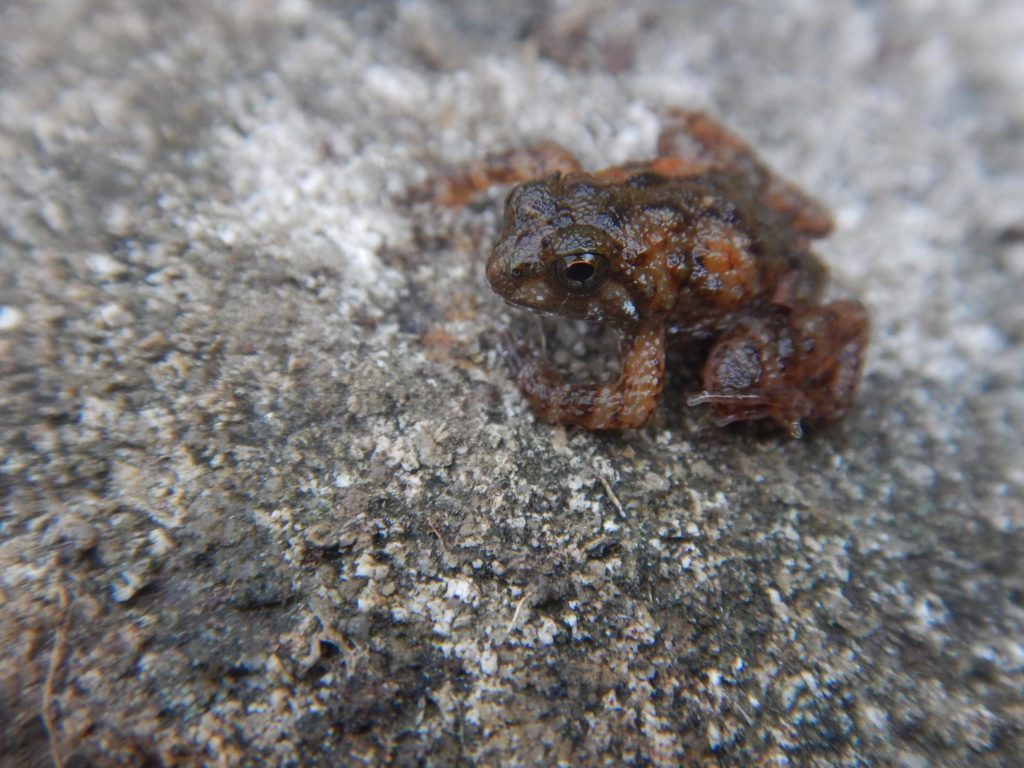 A specimen of Madecassophryne! Photo by Andolalao Rakotoarison, used with permission. 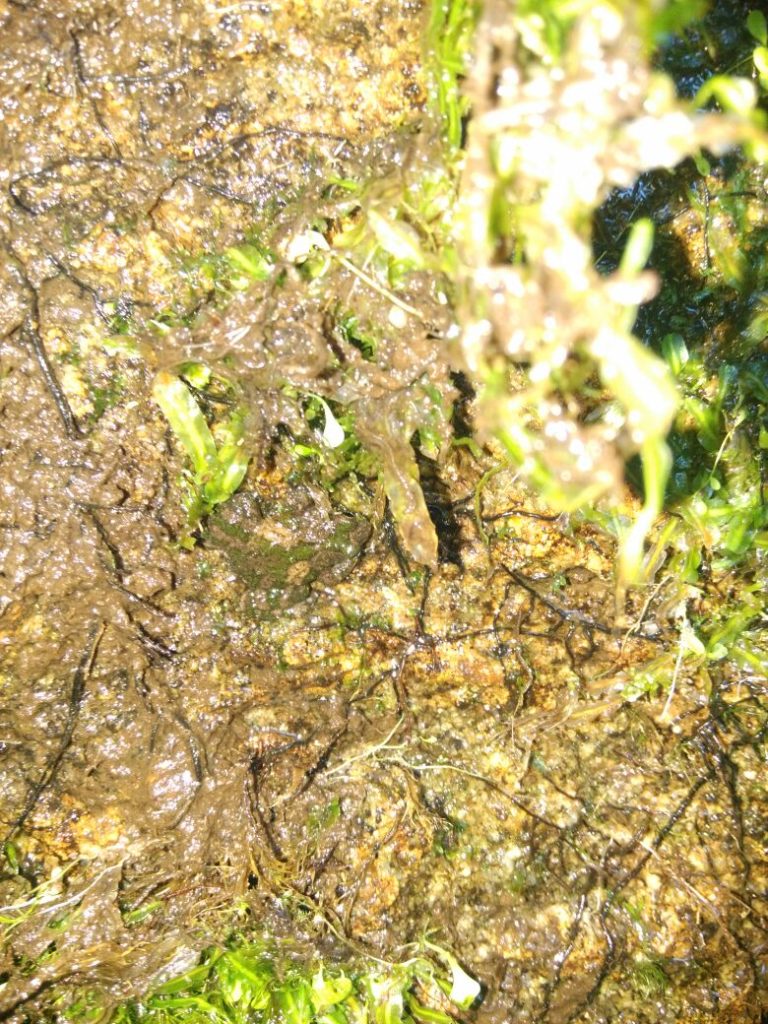 A Christmas present from Ando: A photograph of Madecassophryne in situ. Photo by Andolalao Rakotoarison, used with permission.

The genetic results showed that Madecassophryne‘s relationships with the rest of the cophyline microhylids are remarkably distant, being the most divergent member of the subfamily, separated by a long branch from the rest of the clade. This relationship will be an important piece of information for future work on the evolution of the cophylines, and is already being integrated in our ongoing research on the clade.

Unfortunately, there was also an unpleasant realisation from this expedition: the status of the habitat of this species is in dire straits. Areas that were almost certainly forested when Blanc and his colleagues approached the mountain the 1970s are now completely cleared of forest, and even within the forest, several areas have clearly been burned or otherwise heavily disturbed. At the moment, it is clear that this habitat is urgently in need of protection status. A great deal more research is needed on the biodiversity of the area, but undoubtedly it contains many species that are rare or unknown to science, and establishment of a new protected area should not wait until surveys are in, but should act as soon as possible to help ensure a future for the forest.