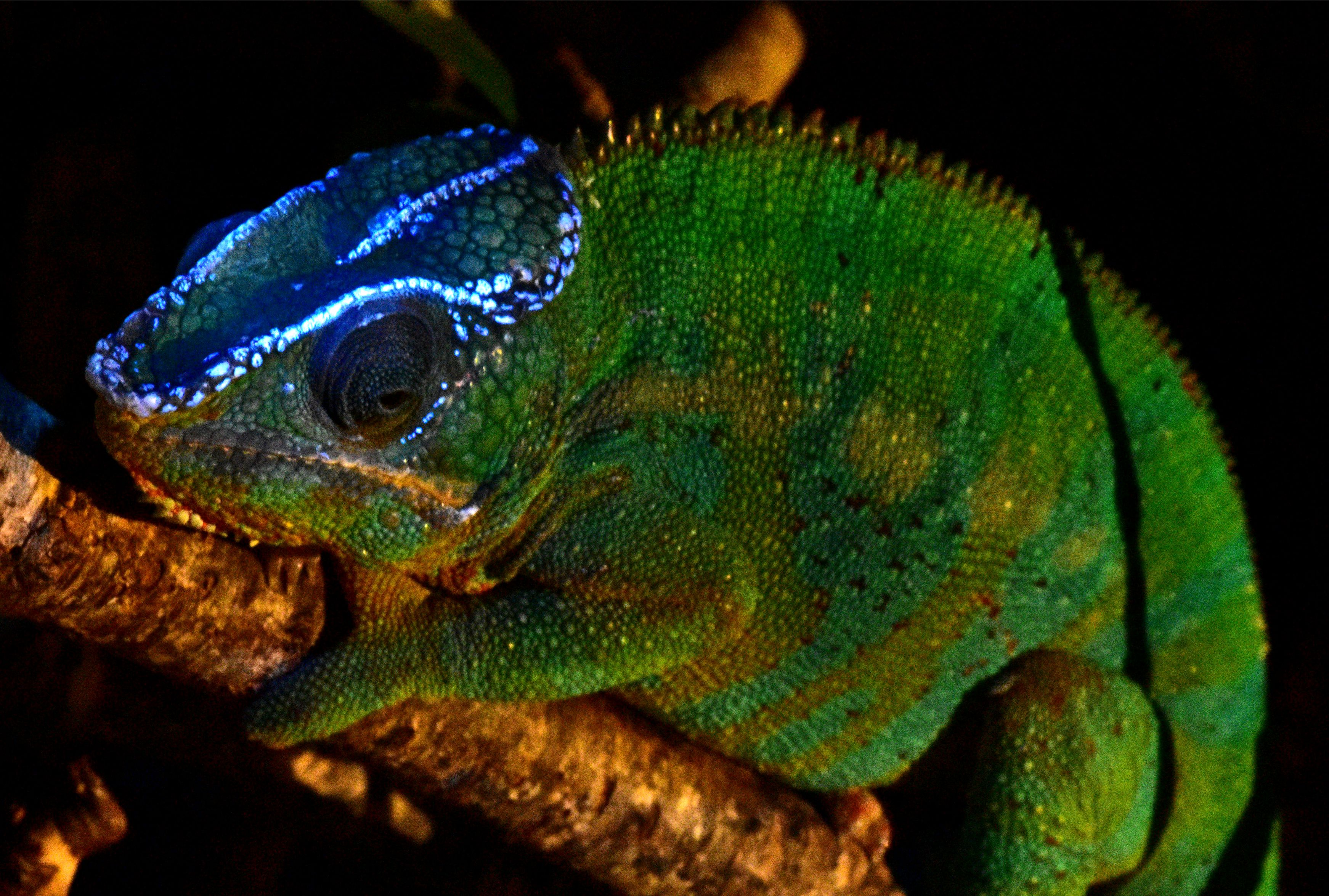 Fluorescing tubercles on the head of Furcifer pardalis. Photo by David Pröztel.

This week, we published something a little different than our typical taxonomic output. Roughly three years ago, my friend, fellow PhD student David Prötzel, discovered a fascinating phenomenon in chameleons: shining a UV torch on them made patterns of fluorescence appear on their heads and in some species across their bodies! Around the same time, we came across a beautiful photograph by the incredible Paul Bertner showing a Calumma gastrotaenia with a small number of fluorescent tubercles around its eye. This prompted an investigation of our collection, where we found these tubercles to be widespread! Our research group then embarked on a mission to study how widespread this phenomenon is, the underlying physiology, and its potential significance. The results of our investigation into the phenomenon were published on the 15th of January 2018 in Scientific Reports; you can access the PDF here! The story has received quite a bit of media attention (it is already the 7th most popular Scientific Reports article of its age!). It will certainly be the crowning jewel of David’s PhD – which is as it should be, as he put an immense amount of work into this project (another of his papers was published recently as well). Here I want to give a bit of an insider view of the findings, their meaning, and how we got them. 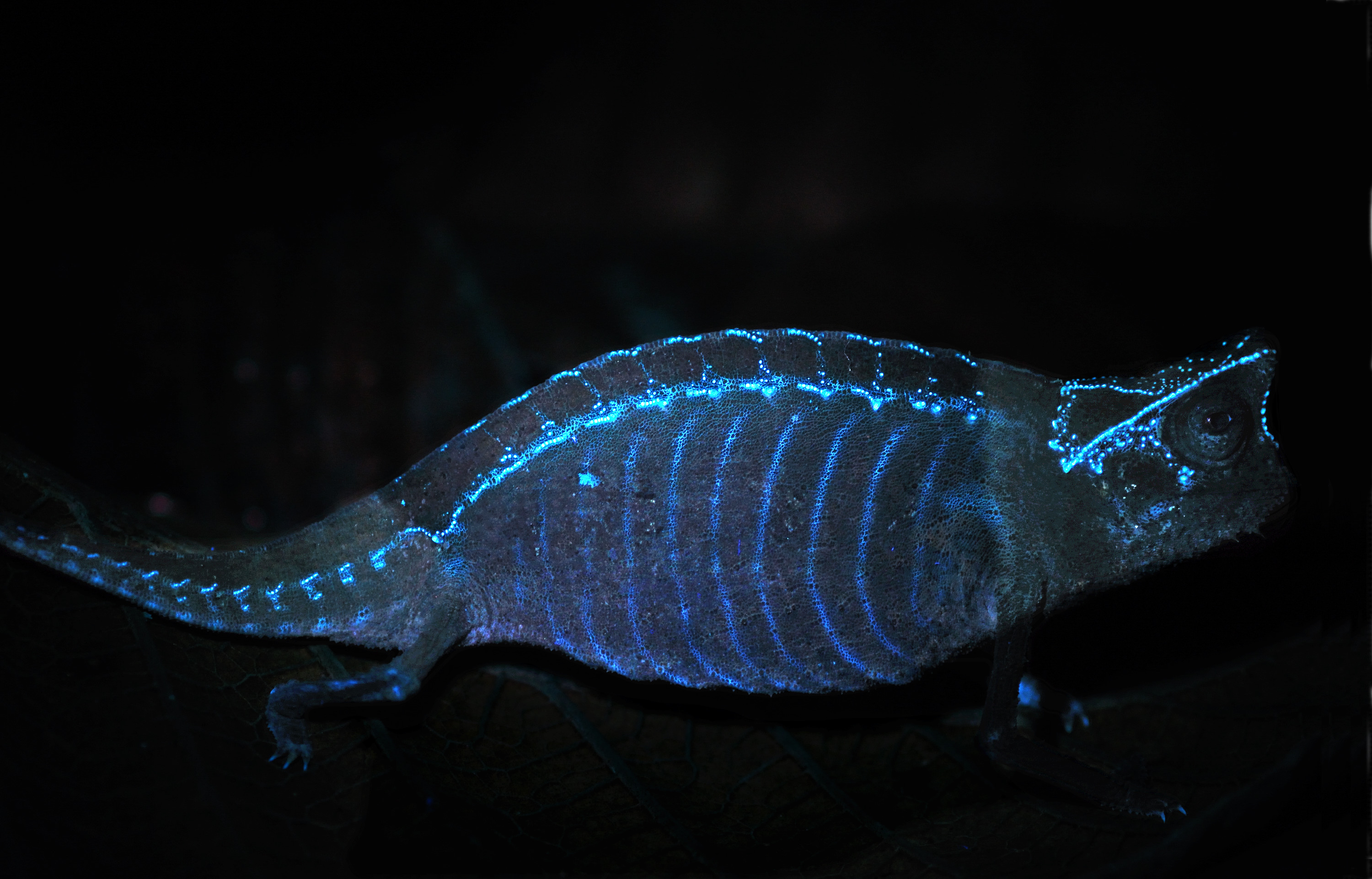 Fluorescence in Brookesia species is more widespread across the body than in larger species. Here, Brookesia superciliaris. Photo by David Prötzel.

The fluorescence patterns and underlying bones of Calumma globifer. GIF by David Prötzel.

First off a brief summary of what we found: Many chameleon species have patterns of ‘tubercles’, that is, raised scales, especially on their heads, that fluoresce under UV light. In fact the phenomenon is present in most genera, and is slightly different in the miniaturised chameleons of the genera Palleon, Brookesia, Rieppeleon, and Rhampholeon, than in the larger chameleons of the other genera. In the larger chameleons, the patterns are mostly found on the head. Especially Calumma has these very pronounced. The real focus of David’s PhD is on Calumma, so he looked closer at these species, and found that the patterns are (1) sexually dimorphic and (2) typically differ among species – that is, taxonomically they are useful characters. The fluorescence points match up one-to-one against patterns of tubercles seen in the skull bones of these chameleons – something we were able to study in great detail with micro-CT scans.

So how do they work? We looked at the tubercles first under the dissecting microscope, and then our colleague Martin Heß prepared histological slices of them to visualise the cell structure around each tubercle. The tubercles are actually projections of the underlying bone up into the scales. Where the scale is thinnest, there is no space for chromatophores (pigment), and so a natural ‘window’ is formed directly to the bone below. Through this window, fluorescence of the underyling bone can be seen. It is important to know that bones as a whole fluoresce under UV light – a fact known to and used by forensic scientists because it decays with time. So the chameleons then have made a pre-existing but unseen fluorescence visible.

We then turned to look at the visual aspect of the phenomenon, and found that the fluorescence is strongly in the blue-green part of the spectrum. This is important: the ability of the chameleons to see UV light (which they probably can see to some extent) is irrelevant because the fluorescence is in the blue-green area of the spectrum. But the effect is weak. Yet some complicated mathematics that I cannot honestly profess to understand, performed by our colleague Martina Schwager, showed that the fluorescence accounts for a surprisingly considerable fraction of the light being emitted from the tubercles. Still not really noticeable to the human eye without a really strong UV source, but possibly within the perception of a chameleon, whose eyesight is actually most acute at these wavelengths. 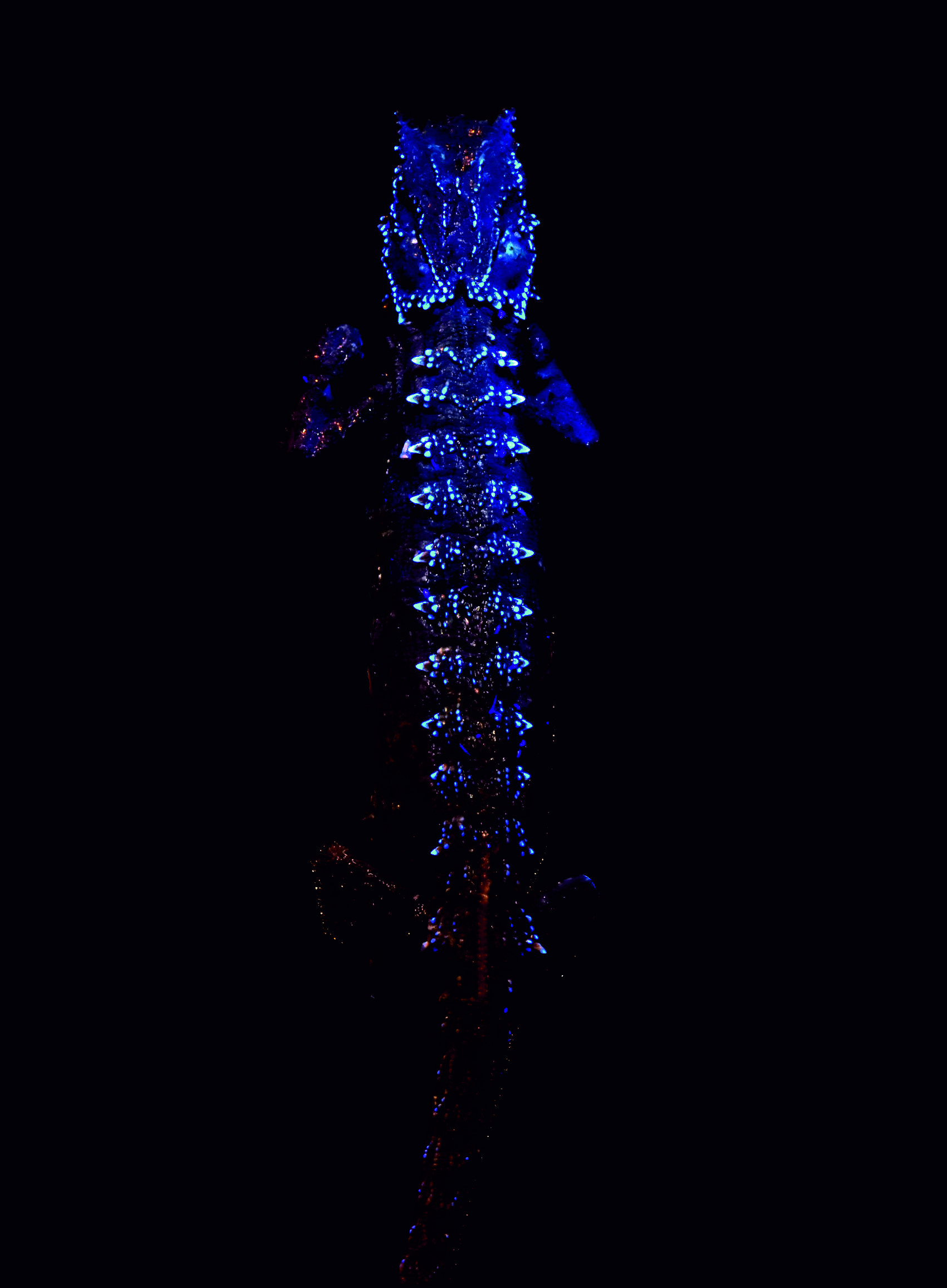 So why do these tubercles and their patterns matter? Well, we only have hypotheses at this point, but we suspect that they may be involved in mate selection and communication among chameleons. Nevertheless, the difficulty in answering this question with any certainty got the paper rejected from a series of other prestigious journals before it was finally accepted in Scientific Reports. It is hard to answer for a number of reasons. First, it is difficult to prove without seriously invasive or time-consuming procedures (e.g. behavioural trials) that the chameleons can indeed detect the fluorescence. Second, even if they can see the additional patterns, how might this be relevant to their biology? – another question that requires extensive behavioural trials. Our argument through this process was the same one: while the phenomenon itself remains unknown to the scientific community, nobody can work to answer these important questions! By making it known, we open up the possibility of collaborations and independent research groups starting to get to the bottom of what is possibly a new and exciting way that chameleons are communicating.

Another interesting question that has been raised to me on twitter over the last few days is ‘how widespread is this among other reptiles?’ This is another question we cannot yet answer definitively, but the short answer is ‘quite.’ Though I cannot go into much detail, there are a number of other groups of lizards that have at least some degree of fluorescence, some in places you would not expect and that cannot be easily explained. We know from a study published last year by Taboada et al. (2017) that some frogs fluoresce, and the phenomenon is also well known from fish. In many of these cases, it is just as hard to satisfactorily explain as in ours. But this is a new and exciting field, and many more discoveries are certain to be made in the coming years!

P.S. here is just a small taste of the media coverage of the story: