As readers of the blog and followers on twitter are probably aware, I work a lot on chameleons. I’ve been involved in the description of a few species previously (including three earlier this year and one last year), and earlier this year I was involved in the discovery of bone-based fluorescence in chameleons. Most of these projects have been led by my colleague David Prötzel, who is in the last fits of his PhD on chameleon taxonomy and communication. I have my own on-going chameleon projects, but I can’t really talk about them much until they get published.

Well, in the last five weeks I’ve had three new papers on chameleons come out, and it occurred to me how great a demonstration they are of the diversity of taxonomic work; we have synonymised one species, resurrected two species, and described one new species. 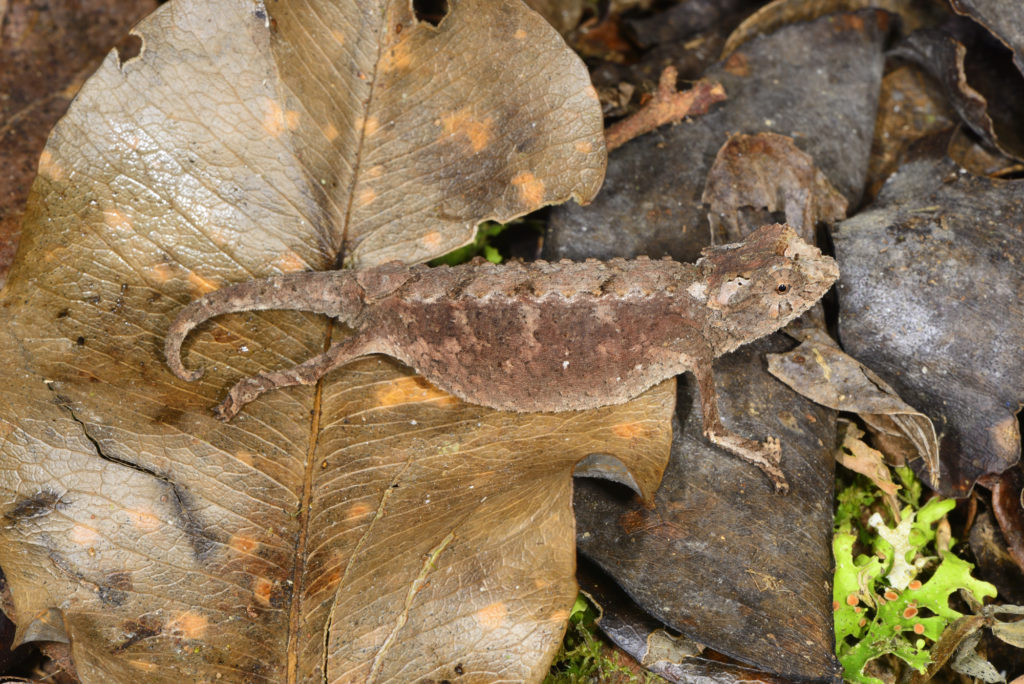 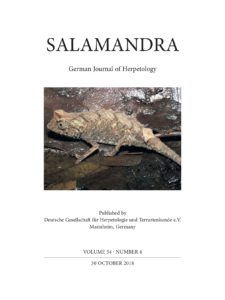 The most recent paper was in fact published today, 30 October 2018, in Salamandra (see the cover image, right). We examined the morphological variation in the chameleons of the Brookesia antakarana–ambreensis complex and found that characters used in their original distinction actually fall on a continuum, and there is no structure in the genetic relationships between species of different morphological ‘classes’. We can only conclude that these individuals, therefore, all belong to a single species. This result has been coming on for a while, but our data left the change inevitable. Curiously, because B. antakarana and B. ambreensis were described in the same paper, this is a situation where the taxonomists get to take a decision as to which name is preferred and kept, and which is rendered the synonym. We chose to keep B. antakarana and synonymise B. ambreensis with it, because there are already so many species of reptiles that bear the epithet ‘ambreensis’ or some variation on it (Calumma amber, C. ambreense, Pseudoxyrhopus ambreensis), whereas the epithet ‘antakarana’ is rare.

The opposite of synonymy is resurrection. This month, we also published a new paper in which we resurrected two species from synonymy. The study was conducted by the joint co-first authors Marina Sentís and Yiyin Chang, two Master’s students at the Ludwig-Maximilian University who I co-supervised. The goal of the project was to establish the validity of two species that have until now been considered synonyms of Furcifer rhinoceratus: F. monoceras and F. voeltzkowi. 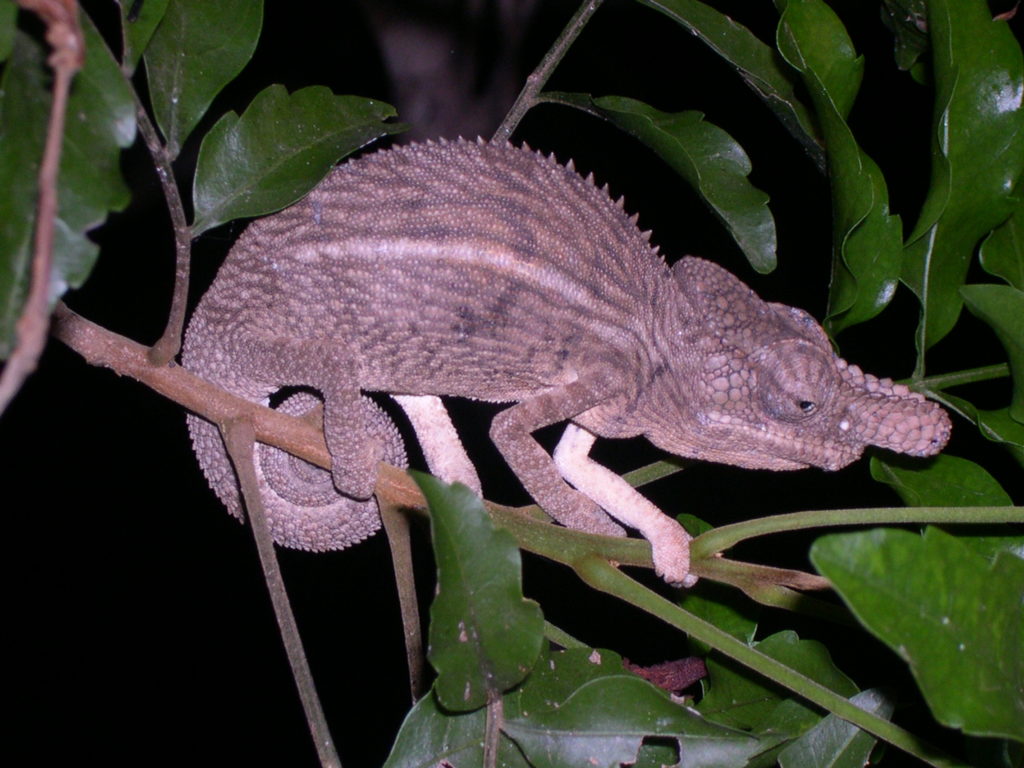 Furcifer monoceras is a very weird chameleon. It is represented by a single specimen, which is quite small at a snout-vent length (SVL) of 71.0 mm. It has an exceptionally short tail, measuring just 48.4 mm, and a huge, pointed rostral appendage, which is almost 70% again the length of the whole head. 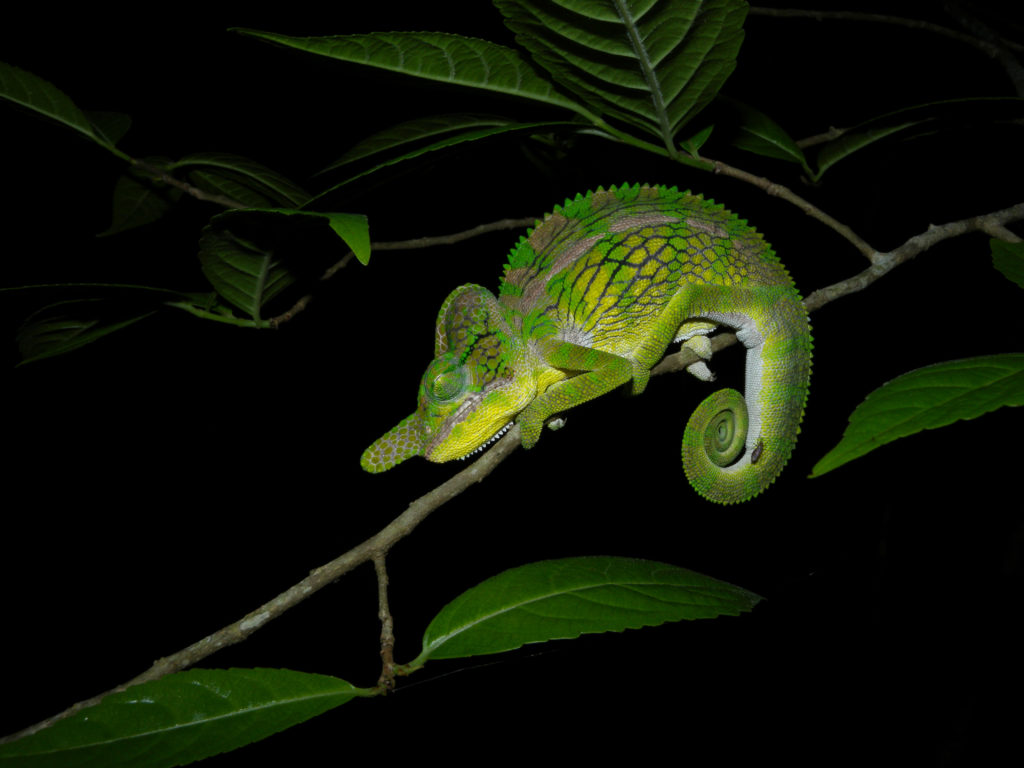 Furcifer labordi asleep in Kirindy. Note the contrasting net-like pattern on the flank, which is a diagnostic feature to distinguish F. labordi from F. voeltzkowi. Photo by Frank Vassen CC-BY-2.0

Furcifer voeltzkowi strongly resembles Labord’s chameleon, F. labordi, which is famed for its extremely short lifespan. It has a high casque, a strong but moderately short rostral appendage, and quite a long tail.

These two species, and the now-famous F. labordi, were considered to be identical to F. rhinoceratus by the late Dick Hillenius of the equally late Zoological Museum of Amsterdam. This was one of a number of bizarre conclusions of Hillenius’ with regard to chameleon taxonomy (for another, read p. 232 ¶3 of the introduction of this paper). Soon thereafter, F. labordi was resurrected, but F. monoceras and F. voeltzkowi were left languishing in the synonymy of F. rhinoceratus. Note that we’ve already established the similarity of F. voeltzkowi to F. labordi—it would make sense for it to have at least been transferred to the synonymy of that species, but alas, it was more or less ignored.

And so we come to our study. Marina and Yiyin studied the morphology of specimens assigned to each of the four species F. labordi, F. voeltzkowi, F. monoceras, and F. rhinoceratus using classic meristic and measurement approaches plus osteological examination via micro-CT. We concluded that each of these species is indeed morphologically distinct, with differences that justify recognition as separate species. So, we resurrected the two species F. voeltzkowi and F. monoceras.

All of this without collecting any new material! The trouble now is that Madagascar has two more recognised chameleon species, but also two more species that have ostensibly not been documented in decades. So the new challenge is to find these species in the wild!

There are always more new chameleons to be described. Taxonomically, this is generally much more simple than synonymising or resurrecting species. This month, we described Calumma roaloko, a beautiful two-toned chameleon from central eastern Madagascar. The species was discovered (or something like it—I’ll get to that below) by the team of Carl R. Hutter and Shea Lambert, two of our close collaborators from the USA, with whom I have worked on a few nice projects, like the large species of diamond frog we described last year. These chameleons being the main focus of David’s PhD, it was only logical that we would collaborate to describe the species. 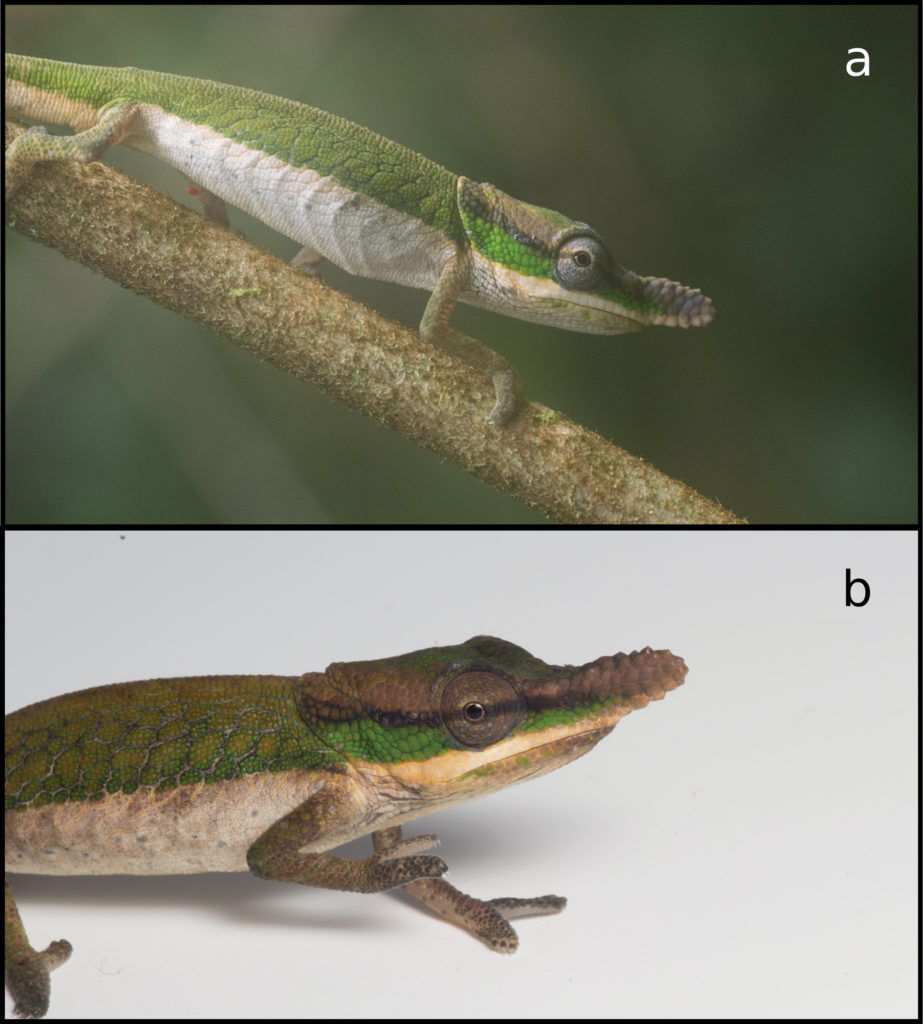 Calumma roaloko is a really surprising species for a few reasons: first, it is the smallest ‘true’ chameleon (subfamily Chamaeleoninae) from Madagascar; it achieves adult male snout-vent lengths (SVLs) of around 4.5 cm and total lengths of under 10 cm! There are a few related chameleons that are of similar sizes, but none that really rival C. roaloko. For reference, the largest of the dwarf or leaf chameleons, subfamily Brookesiinae, is Brookesia perarmata, which can attain total body lengths of 11 cm.

Second, C. roaloko is closely related to the magnificently coloured C. uetzi, which we described earlier this year, and which I have written about here. This is surprising because C. uetzi is found in Sorata and Marojejy in the north of Madagascar, and the two species are separated by over 500 km. This is a similar surprise to that we got from C. juliae (described with C. uetzi and written about here), which is found quite near to C. roaloko, but which turned out to be closely related to C. linotum and C. boettgeri, which are also found in the north of the island! Getting such similar patterns of close relationships over long distances in parallel in an ostensibly closely related group of chameleons is really quite surprising, and we still do not have a satisfactory explanation for this phenomenon!

Third, C. roaloko is from the central east of Madagascar and was found in forests just a few kilometres to the south of Andasibe, Madagascar’s most popular tourist destination due to its rainforest expanses and proximity to Antananarivo. Although micro-endemism is rife in Madagascar’s herpetofauna, there is a good chance that this species is present in Andasibe and the surrounds as well, and has been overlooked by generations of herpetologists.

As it turns out, it has not gone wholly overlooked, though. Photos of this beautiful new species have made rare but occasional appearances on the internet, and a few specimens almost certainly exist in various collections that were collected before Carl, Shea, and colleagues made their collections that enabled us to describe the species.

There are numerous additional chameleon projects still in the works. David is working to complete his work on the Calumma nasutum complex, and I am working on various additional projects, among which is the analysis of the data gathered in Montagne d’Ambre, which is certain to be a source of publications for the next few years.