In 2014, I started working on the taxonomy of the diamond frogs of the genus Rhombophryne, a poorly-known group of semi-fossorial narrow-mouthed frogs from Madagascar. Since then, my colleagues and I have more than doubled the described species in the genus, and we know of several more candidate species that are still waiting to be described. Additionally, I have had the good fortune to discover a couple species that were new to science in that short time, which have joined those ranks. Today, in the open-access journal Zoosystematics and Evolution, I have published the description of one such recently discovered species. It was collected during my research expedition to Montagne d’Ambre National Park in northern Madagascar in 2017, which started well, but ended rather harrowingly (you can listen to me talk about it on this episode of the Chameleon Academy Podcast). But this new species is rather special. 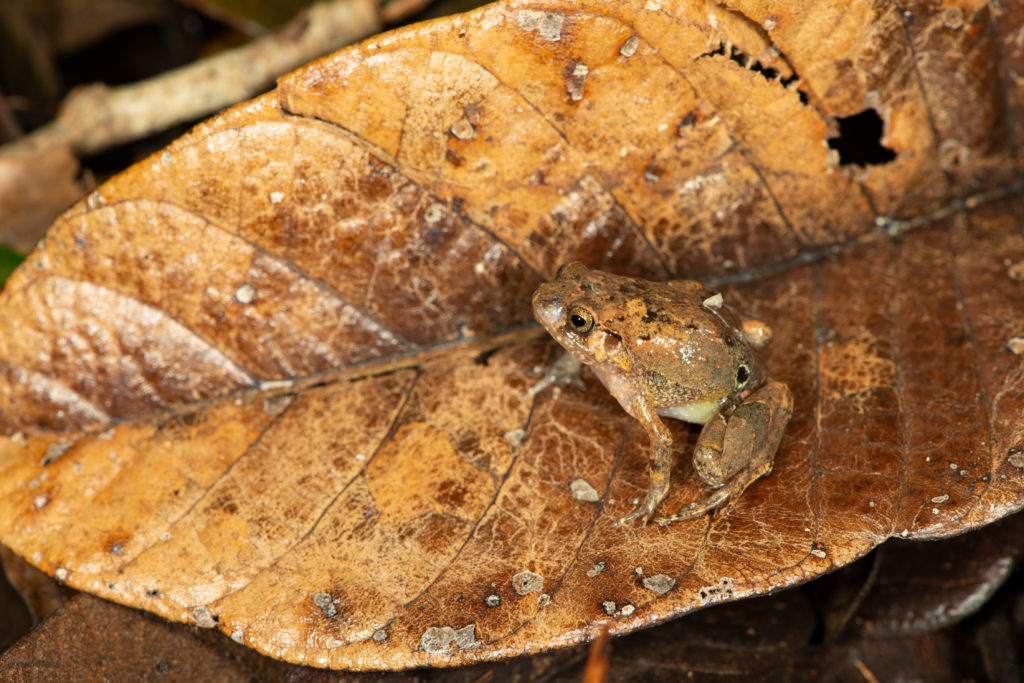 Notice the large black markings outlined with cream in the hip region. Similar markings occur in many other frogs, and are thought to be associated with predator deterrence.

Why is this frog special? Well, there are a few reasons.

Firstly, it has orange colouration on its legs and large cream-ringed black spots above the hip that give it eye-like markings when looked at from behind—these features have been practically unknown within the genus Rhombophryne before this species, making it very obviously new to science. The only other member of the genus that has similar features is an undescribed candidate species that is still awaiting description, but it is genetically strongly distinct from the new species.

Secondly, this is my first single-author paper. Usually our work on the amphibians of Madagascar has long author-lists (it is, after all, extremely collaborative), but in this case, after discussion with my colleagues, it was agreed that I could go ahead and tackle this one on my own. This is a one-off for me, but it is justified by the third reason that the frog is so special: 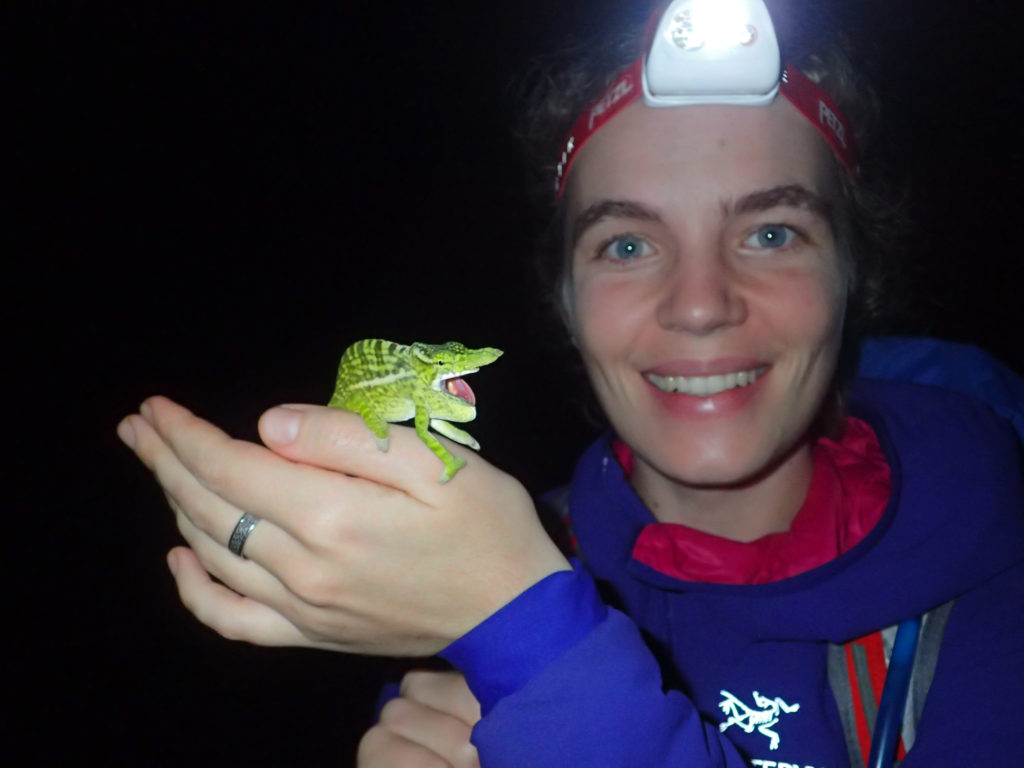 Ella with a male Furcifer petteri

Thirdly, I have named the new species Rhombophryne ellae, dedicating it to my partner, Dr Ella Z. Lattenkamp. Ella was with me in the field when this frog was found, and so this is the only Rhombophryne she has ever seen alive. At the end of April, she defended her PhD thesis from the couch in our living room. I named this frog after her as something of a celebration gift, and also in appreciation of all the ways that she helped me over the last six years, and continues to support my work. It also seemed somehow very fitting to dedicate a diamond frog to my fiancée. After all, diamond frogs are forever.

Rhombophryne ellae is a small species, but we know it from just one individual, so we cannot yet guess as to its variability. Some may have qualms about describing species from single individuals, but in this case, the one individual was clearly an adult or nearly-adult female, is very easy to distinguish from all others, and is genetically also highly distinct. As a result, there is no question that this is a new species to science, and that the description, even based on just one individual, would be sufficient to identify further individuals. Nevertheless, because just one individual is known, it is hard to guess at how threatened it is, its ecology, habits, etc. So, above all, more work is needed in order to see if more individuals of this species, that has apparently been hiding under herpetologists’ feet for centuries, can be found. 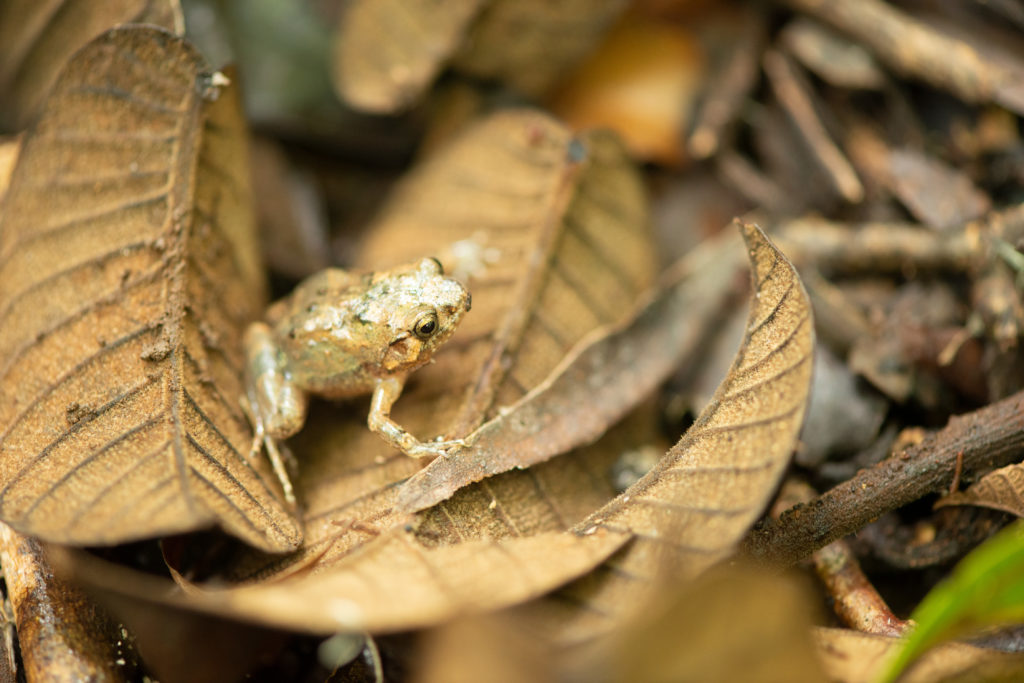 One key to finding species like this one that spend a lot of time buried beneath the leaf litter seems to be inclement weather. Several species of microhylids that we have recently described have been found during cyclonic weather, including the diminutive Anodonthyla eximia that my colleagues and I described last year, and the very fat Rhombophryne nilevina we described a few years ago. In some cases, this can put herpetologists in considerable danger of being hit by lightning, struck by falling branches or trees, or swept into rivers, so it seems only fair that we are rewarded for the risks we endure by the occasional new species!

Ella evacuating the field during a break in the weather from cyclone Ava, before the next series of cyclones descended on Madagascar

Our camp on Montagne d’Ambre in the first days of January 2018. Note: there were no rivers running through camp before we set it up.