Pachydactylus rangei is a bizarre gecko as it is, with its curiously webbed feet and startlingly coloured eyes. Photo: David Prötzel

Just after we discovered that so many chameleons fluoresce (three years ago), David and I (both PhD students at the time, working in the group of Frank Glaw at the Zoologische Staatssammlung München, ZSM) started to turn our UV torches on other animals in the collections of the ZSM and in our private husbandry at home. For years, David has been keeping web-footed geckos at home, but when he turned his UV-torch on them for the first time, he got a big surprise: these geckos fluoresce in bright neon-green stripes down their flanks and around their eyes! 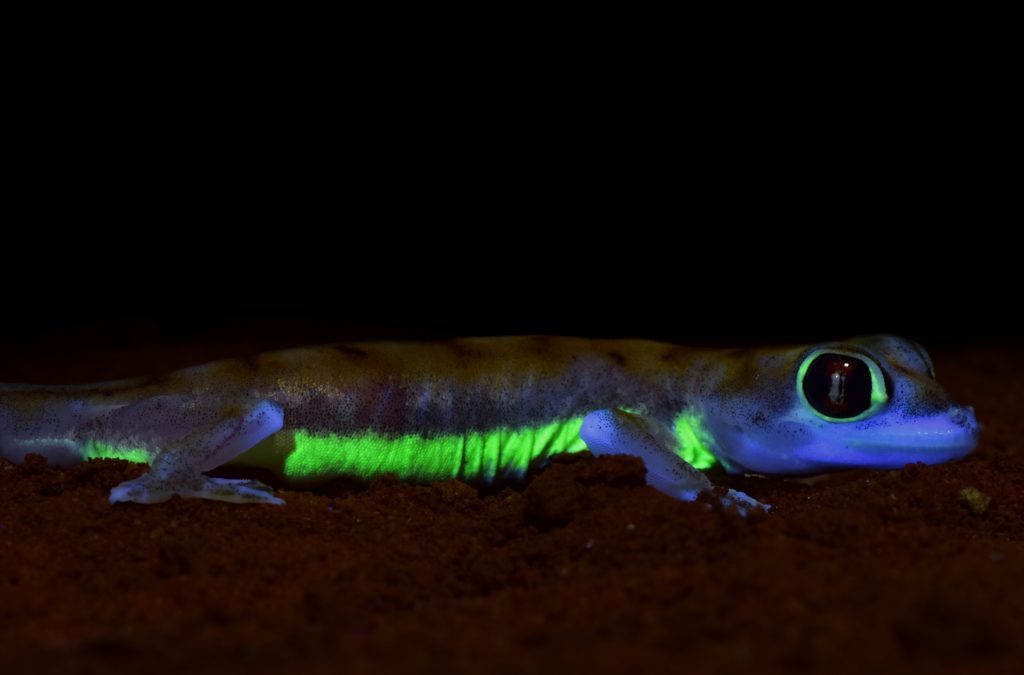 The web-footed gecko (Pachydactylus rangei) from the Namib desert fluoresces neon-green along its flank and around the eye under strong UV-light (365 nm). This signal is best recognisable from the gecko’s point of view. Photo: David Prötzel. 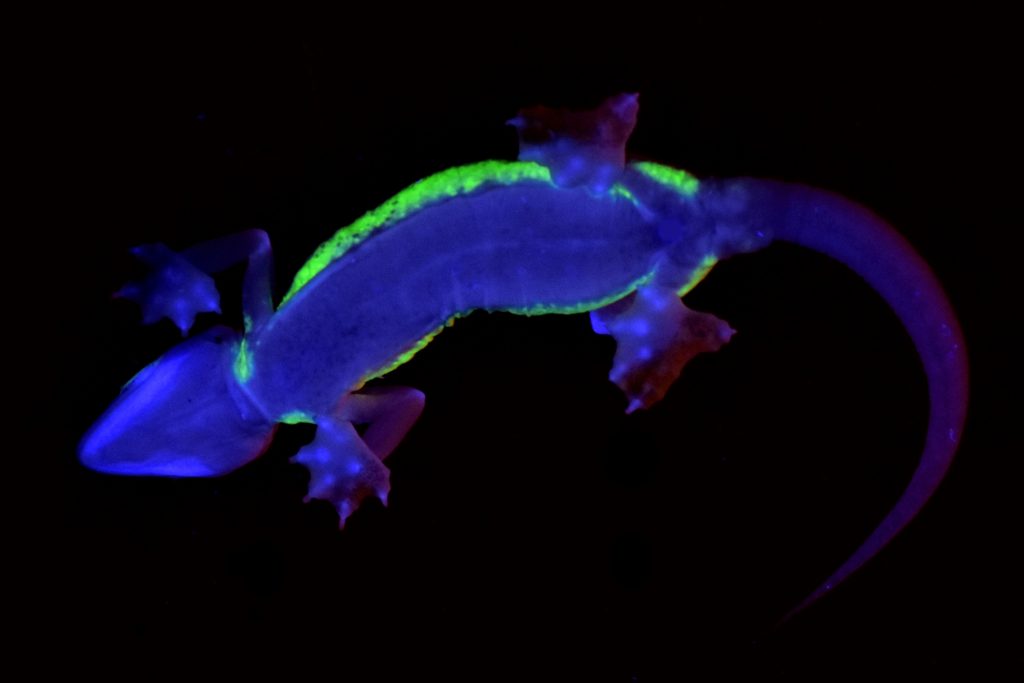 From below, both the web-footed gecko’s characteristic feet, as well as the distinctly distributed fluorescent areas become visible (under UV-light at a maximal wavelength of 365 nm). Photo: David Prötzel.

So, we started studying this from a variety of angles. David had a few individuals of these geckos that had died and been frozen or preserved in ethanol over the years, and there were a few more in the collections of the museum, so we were quickly able to establish that all members of the species glow, that the pattern is consistent between sexes, and that even hatchlings glow strongly, meaning that we are dealing with something that is patterned in the egg already, and that doesn’t depend on the age or sex of the individual. Looking at the museum specimens of various ages, we were also able to establish that the effect does fade over time in alcohol, but that it takes 30 or so years to be completely gone. With some crude dissection and microscopy, we also established that the fluorescence is limited to the skin, and not in the flesh below it, nor in the scales above it.

We then turned to our colleagues Martin Heß and Martina Schwager, who had also been involved in our chameleon work. Dr Heß made histological preparations of the skin of preserved animals, while Prof. Schwager carried out spectroscopic measurements of the fluorescence. The results of this work were astounding. 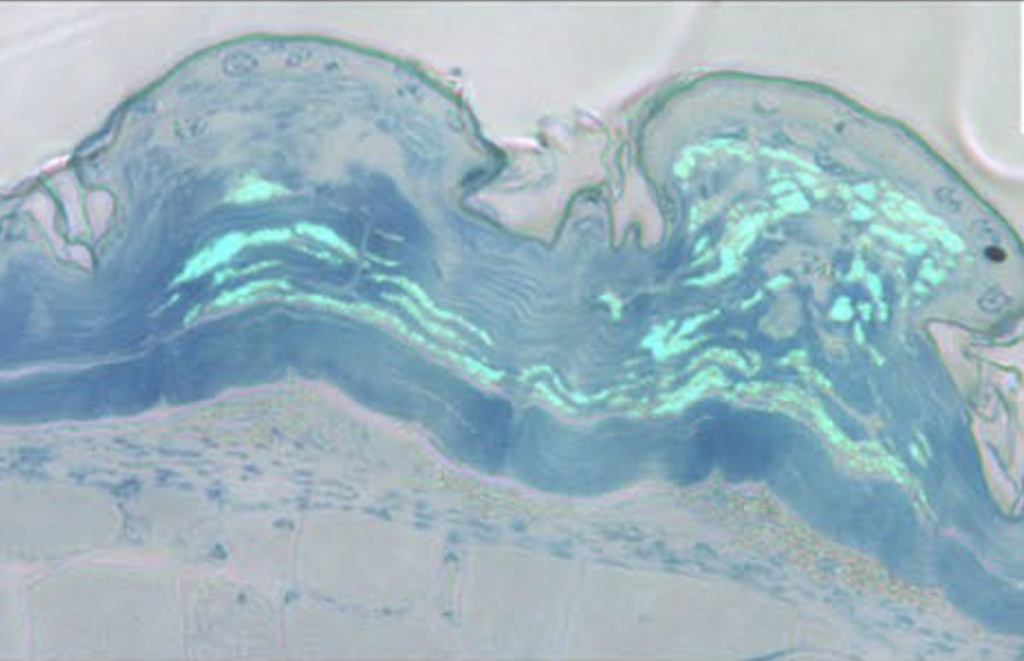 A section of the skin of the web-footed gecko under fluorescent microscopy. The cyan areas are those that fluoresce green under UV/blue light. Image: Martin Heß

Histological sections, especially using fluorescence microscopy, showed that the fluorescence effect is produced by groups of granules located in the skin of these geckos—located, moreover, only in the fluorescent areas of the skin. These granules are guanine crystals, which sit within pigment cells called iridophores. Iridophores themselves are very well known—they are whitish or yellowish generally, and are used by many animals in skin colouration. They do not, ordinarily, fluoresce, although there are fish in which they fluoresce red. Already it was clear that this was a completely new fluorescence mechanism for tetrapods.

We also found that there are two layers of iridophores in the skin of these geckos, the upper of which fluoresces, while the lower does not. That is interesting, because most reptiles have only one class of iridophores; chameleons are an exception, but their two classes differ in different ways to those of these geckos. Looking closer, we found some weak statistical differences in the length and organisation of the guanine crystals in these two iridophore classes, but nothing too dramatic. It is not really clear why the one layer fluoresces while the other does not.

And when it comes to quantum yield, this is where the fluorescence of these geckos really shines (pun intended); with a yield of 12.5%, it is among the brightest vertebrate fluorescence known to date! Just as bright as the neon-green fluorescing frog, Boana punctata, which, however, fluoresces via an entirely different mechanism.

Even though we know quite a bit about the fluorescence of Pachydactylus rangei, it is still not fully clear what is fluorescing here. Apparently, based on the chemical structure of guanine and its known fluorescence profile, guanine crystals themselves can be ruled out. At the same time, the fluorescence is clearly limited to the places where guanine crystals are localised, and thus the fluorescence must be happening within iridophores. We think that there is probably a fluorescent protein at work here, but that remains to be established.

Finally, it is worth talking briefly about the functional significance of all this. Increasingly we are seeing headlines like ‘Platypuses Glow Under Blacklight. We Have No Idea Why.’ (NYTimes). This is because at the moment there is a huge surge in the number of organisms, especially vertebrates, being discovered to fluorescence, but so far, only a handful of fluorescent vertebrates are thought to have a function for that fluorescence. Indeed, we still don’t really know why scorpions fluoresce! So every time fluorescence is discovered, we have to ask ourselves the question ‘could this possibly have a biological function, and if so, what is it?’

In many cases, the answer is undoubtedly ‘no, this probably does not have a biological function’. For example, I would be willing to bet a substantial sum of money that wombats and platypus probably fluoresce ‘by accident’, as a result of sequestering or secreting some chemical in their fur that happens to fluoresce. Likewise, many reptiles (especially geckos) have translucent skin through which their bones can be seen under bright light. As all bone fluoresces, that fluorescence is almost certainly not adaptive, but is rather coincidental.

We are therefore always on the look for signs that the fluorescence can be seen under natural lighting conditions by the animals themselves or other members of their ecological community, and that it occurs in areas that suggest a role for some kind of evolutionary pressure in shaping the fluorescence. For example, in chameleons, although the blue fluorescence of their head crests is weak, we argued that their visual acuity in the blue part of the spectrum, as well as the localisation of the fluorescence to special outgrowths of bone and transparent skin windows atop them, suggests both that the chameleons could possibly see the fluorescence under natural light, and that it is possibly under sexual selection, given its association with sexually selected head crests.

Pachydactylus rangei are solitary animals in the wild, but when they encounter one another they greet each other, and even lick moisture from each other’s skin. Photo: David Prötzel

In Pachydactylus rangei, we think the evidence is strong that the fluorescence is biologically significant, even though these geckos are only active at night, and the fluorescence could only be triggered therefore by moonlight. Arguments for this are (1) the fluorescence is amongst the brightest of all animals; (2) nocturnal geckos tend to have highly acute eyesight, including colour vision; (3) in the Namib, moonlight tends to be very bright, and there is no shade to obscure that light, unlike e.g. Boana punctata in its rainforest habitats; (4) the fluorescence is limited to areas of the body that are best seen from a gecko’s-eye-view, and are not visible from above, e.g. from a jackal or owl’s perspective; and (5) these geckos, though mostly solitary, are sociable when they meet each other, and even lick dew off one another’s faces, potentially a vital source of water in the Namib desert.

All-in-all, we think web-footed geckos represent one of the best cases for functional significance of biological fluorescence in the animal kingdom. Although we have not yet had the budget or means to carry out behavioural experiments to formally test this biological role, we hope to be able to do this in the future, and also to carry out fieldwork to study their behaviour in situ. For now, though, we are just excited to finally reveal this awesome discovery to the world!

2 thoughts on “A neon-green glowing gecko!”