In April 2017, Darren Naish posted on his blog about the books that most influenced him, in a post by the same title as this one. This list, which, I admit, contains not a single book present in my own library, inspired me to share my own. In this case I must qualify of course that I here restrain myself solely to natural history books, for those are doubtless most relevant to the reader’s interest. Nevertheless, I should make clear that the books that had the most profound influence on me were, generally, less concerned with natural history, these being in particular the Redwall books, Harry Potter, and the works of J. R. R. Tolkien—and in no small part Calvin and Hobbes.

Following Darren’s example, I will refrain from offering reviews of the texts discussed here, as these would be lengthy. Rather, I wish to impart a small taste of why these books were so important to me, and why I would encourage others to read them also. You will note also the conspicuous absence of the book that I spend most of time with today, which is of course Glaw & Vences’ 3rd edition Field Guide to the Amphibians and Reptiles of Madagascar; this and other books may be part of a future instalment, but played a more major roll later on, and therefore had less to do with shaping my personality than the contents of this list. 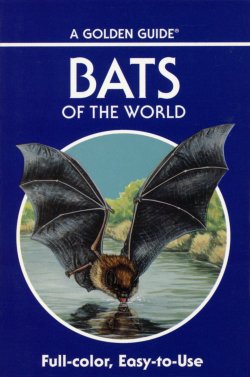 The Golden Guide to the bats of the world was probably the first fieldguide I owned, and certainly was a major influence during my childhood. The book contains dozens of beautiful hand-drawn illustrations of a wide variety of bats, and though I did not read it keenly (I was not a very effective reader as a child), I spent a great deal of time committing to memory the illustrations and some small part of the information accompanying most species. This book led to a period in my childhood during which I practically refused to talk about any topic other than bats. Another book on bats was, according to my mother, the book from which I learned to read, as I would refuse to read the sensible, children’s books available to me. Funnily enough, there was also a Golden Guide to Reptiles and Amphibians, but I never had the good fortune to acquire it, so it would be some time before I developed as keen an interest in those animals as my interest in bats was at this age.

After I had gotten the hang of the reading thing, I (slightly) diversified my reading interests. One of the series of books that managed to catch my full and undivided attention as a child were the Magic Tree House books. Of course, this was to be expected, given the topic of the first book, Dinosaurs Before Dark. I found these books absolutely engaging, perhaps in part because they were nicely illustrated, but mostly because… time- and space-travelling tree house? Sign me up! The series, which is extensive (55 books have been published thus far, and a 56th is set to be released on the 15th of August 2017!), takes children of like age to its target audience (6–9 year olds) on adventures within historic events and timeframes. If that weren’t enough to capture my young imagination, the fact that the characters in the books, Jack and Annie Smith, are from a fictitious town called ‘Frog Creek’ might have done it! It is my opinion that these books deserve a position on this list for one reason: they were responsible for my developing an appetite for reading.

Perhaps no author laid greater claim on my adolescent mind than Gerald Durrell. His writing was always transportive and immersive, given in clear language yet redolent with atmosphere. There are few books I have ever read where the experience has left me in danger of wetting myself with mirth whilst reading, but most have certainly been authored by Durrell. In this case I have chosen The Whispering Land merely in a representative capacity. It, like most others, is full of situational comedy that anyone can enjoy, but that is all the more enjoyable for being an animal enthusiast. It tells of his trip to Patagonia and Argentina, and contains hilarious accounts of idiosyncratic bureaucracy, mischievous animals, and the day-to-day struggles of a zoo collector in South America in the 1950s. Though this is perhaps not the crowning jewel of Durrell’s bibliography (I think I must nominate Catch me a Colobus or The Drunken Forest for that position), this book was one of the first of Durrell’s that I read.

If I am honest, I tried at first to read A Zoo in my Luggage, based primarily on my love for the title of that book, but it was The Whispering Land and the other stories of the real field experiences that later truly solidified my love for Durrell and his works. It occurs to me also that you might expect that My Family and Other Animals, which is easily the most famous of Durrell’s books, is not on this list. For me it played an entirely different role, and though I have always liked it very much (and indeed, it inspired me and my partner to visit Corfu in 2015), I never considered it equal to the stories of Durrell’s experiences collecting animals. 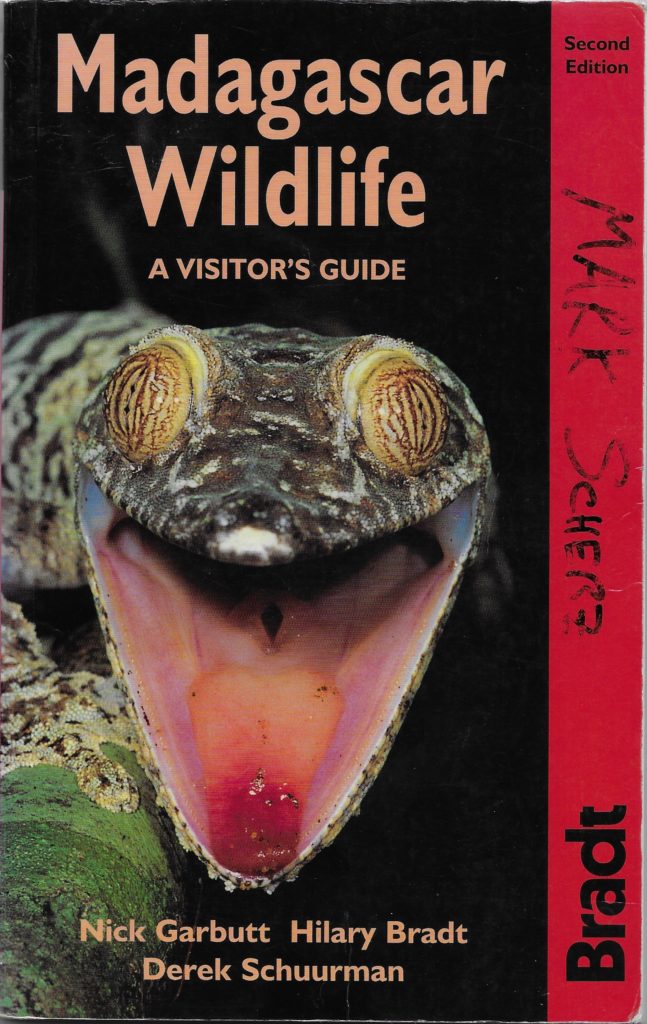 Fairly early in my love-affair with Madagascar, I acquired, though I do not now know how, a copy of the second edition of the Bradt guide to Madagascar’s wildlife. This book, now in its fourth edition, contains a concise but beautifully illustrated overview of the flora and fauna of Madagascar, and on the cover of the second edition was the face of an incredible lizard, Uroplatus fimbriatus. I can clearly remember poring over the pages of this book and being ensnared by the vivid photographs, especially the reptiles section. Indeed I would guess that it was this book that transferred my interest in Madagascar from its mammals to its reptiles; only later did I develop an equal fascination for its amphibians. This is as no surprise, as the second edition was woefully lacking in information on the frogs of Madagascar, with just four sides and eight photos of them. I am told that the latest edition has been updated in this regard.

This book is a companion guide to the main Bradt Guide to Madagascar, which is currently in its eleventh edition, with the twelfth edition due to be released on the first of October. This book, in its eighth edition, should receive an honourable mention on this list, because it soon joined the Madagascar Wildlife book on my shelf, and it was on the basis of these two books that my Madagascar-obsession fledged, and I later was able to persuade my father to take me to Madagascar for the first time. I should mention that a third Bradt book related to Madagascar, entitled ‘Madagascar Highlights‘ has also recently come onto the market, which is aimed more at people coming on tours of Madagascar than the main guide. I should also mention that the most recent edition of the Bradt Guide to Madagascar, and Madagascar Highlights, contain some photos by me.

So those are the books I will leave you with; from the first books I ever read, to the books that certainly had the greatest influence in shaping my current research career. I may in time write another post on the books that have been of greatest scientific interest to me since embarking on my academic path. Although I imagine that my list is somewhat specialised, I would be very interested to hear if it strikes a chord with any readers? What were the books that most shaped your development?