I am pleased to announce that my colleagues and I have just described a new species of chameleon, Calumma gehringi, from northern Madagascar, published today (13 October 2017) in the Open Access journal Vertebrate Zoology! A PDF of the paper can be downloaded by clicking here. 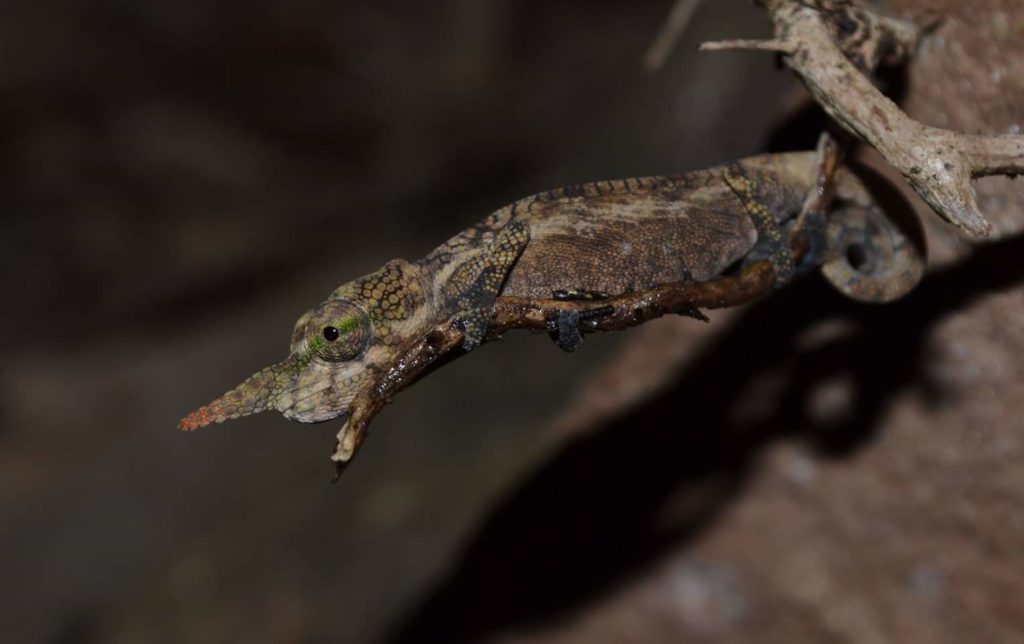 This latest paper is an important step not only in the PhD work of my colleague and friend, David Prötzel, who led the study, but in the resolution of one of the most surprisingly underestimated species complexes of Madagascar’s reptiles and amphibians: the Calumma nasutum group. This group of chameleons, which may or may not be a monophyletic one (Tolley et al. 2013), contains nine described species, though the affinities of at least one of the species assigned to it are questionable. They are characterised by small size, long and slender body shape, a generally quite low casque (head), and especially a soft appendage made of skin on the tip of their noses, which tends to be of remarkable colouration, ranging from bright blue to bright green, to an assorted range of spectacular colours in the exceptional Calumma gallus (pictured).

The diversity of the group was not really known until a seminal work by Philip-Sebastian Gehring and numerous colleagues addressed its diversity in 2012 (Gehring et al. 2012), as part of the former’s PhD. In this study, they analysed genetic data from specimens of the C. nasutum group from across Madagascar. Their results were astounding: far from the ‘six or seven’ species held at the time to belong to this group, the genetic results of their study revealed some 33 Operational Taxonomic Units (OTUs—provisional units that might be thought of as ‘pseudospecies’)! While this number will inevitably overestimate in some regards (OTU estimation almost always does), it may underestimate as well, for several additional species are likely to be (and certainly have been) discovered that were not included at this point. The diversity of the group then must be great indeed in comparison to the rest of the genus, which in total comprises just 34 species as of today. Clearly, a great deal of work was and is required on the taxonomy of this genus. Thus it was that David set out on his PhD, some four years after this paper was published, with the aim of unravelling the taxonomy of this underestimated group. 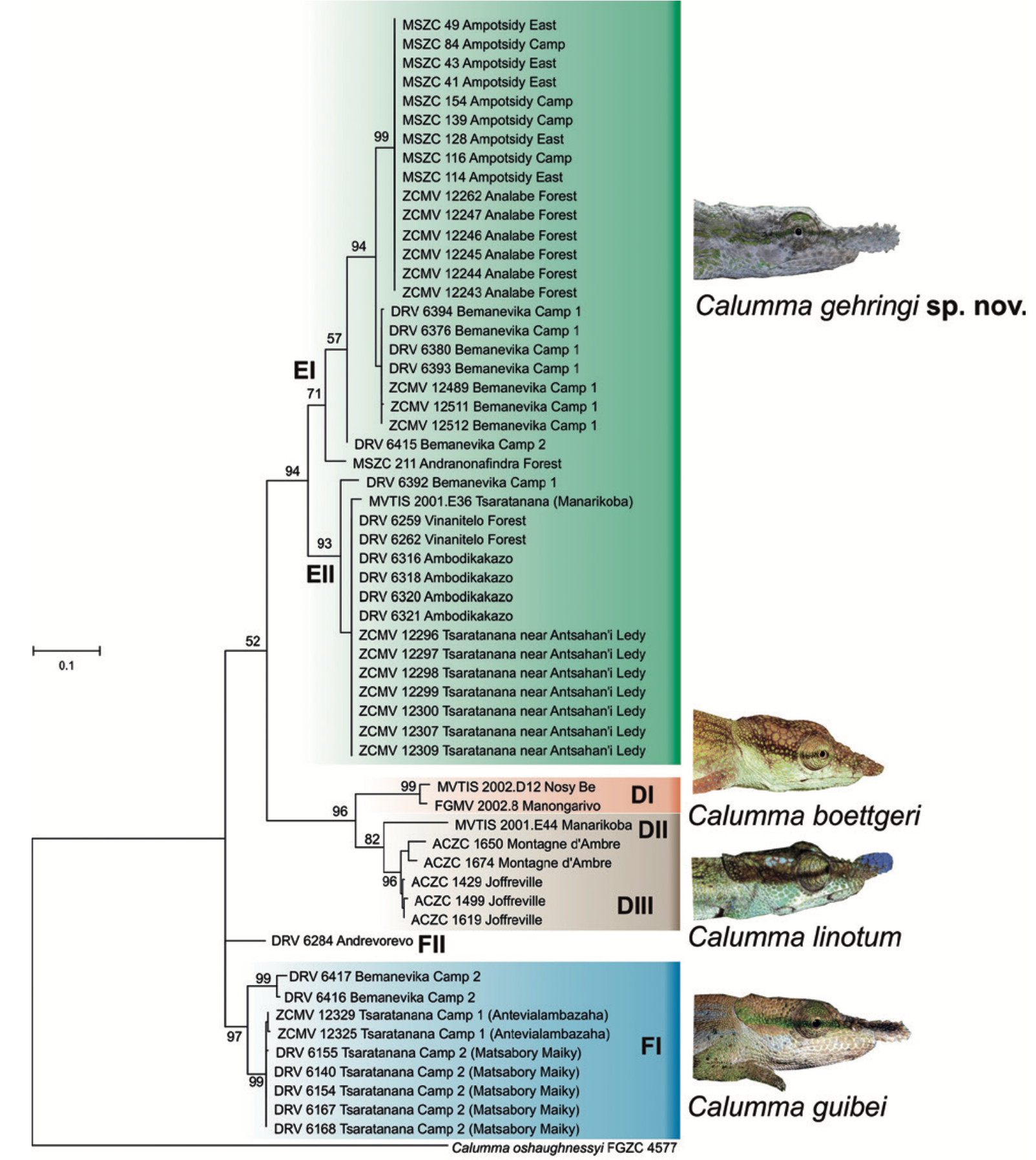 The Calumma guibei clade constitutes a clearly defined subgroup of the C. nasutum group, consisting, until now, of the three species C. guibei, C. boettgeri, and C. linotum. These species share a common feature lacking in all of the other members of the group, a lobe of skin behind the back of the head called the ‘occipital lobe’. In a previous work on this group, David and colleagues, including myself, revised the taxonomy of the latter two species (Prötzel et al. 2015), finding that members of C. linotum were restricted largely to Montagne d’Ambre in northern Madagascar, with a single record from considerably further south near Tsaratanana, while C. boettgeri is largely from Nosy Be and the adjacent mainland—you may request a PDF of that paper by clicking here. This paper left the question of the definite identity of C. guibei open, as it was not immediately concerning. This question has now been addressed in our most recent paper: Prötzel et al. (2017).

Two deep genetic lineages identified by Gehring et al. (2012) could correspond to C. guibei, so re-examining the type material of that species was a clear first step in order to proceed with their taxonomy. Regrettably, the specimens from which C. guibei was described are two juveniles, which makes it difficult to be certain of characteristics really defining the species. One stroke of luck was that the species, described originally in 1959 by Lars Hillenius, was given a fairly accurate type locality, at high altitude on the Tsaratanana massif in northern Madagascar. Based on this location, and on the overall morphology of the type specimens, despite their immature state, we were able to narrow down the species with some confidence to a lineage heretofore referred to as ‘Clade FI,’ which resembles the species in particulars which I will not enumerate here but which can, of course, be found in the paper. A re-description of the species was necessary, as the first adults were now available. The species is modest in colour, rather brown and grey with a dark rostral appendage (nose flap) and a green stripe running across the eye.

Calumma gehringi, a recently described species of which many specimens were collected on our expedition

Note the black shading beneath the occipital lobes, and the yellow tinge to the rostral appendage.

With Calumma guibei confidently assigned to Clade FI, we were able to turn our attention to Clade E, for which no name was already available. For this species, a large number of specimens were available, as I had recently returned from an expedition to the Bealanana District when this paper was begun, and collected there a rather nice series of specimens of it. The species is quite clearly distinct from all others, but most similar to C. guibei, from which it differs in particulars of the skull morphology, and apparently in the presence of a crest of small spines along the back of males that is altogether lacking in C. guibei. What struck me most about the colour of the species in my field observations was that there is an apparent sexual dichromatism, with males tending to have neon green rostral appendages, and females tending to have yellow ones. Gravid females were almost completely green, while males tended to have nice orange patches along their flanks. The species was not uncommon when I encountered it, and in one instance I counted some ten specimens within a few metres of each other in a single patch of forest near a stream, just a few dozen metres from the edge of the forest. 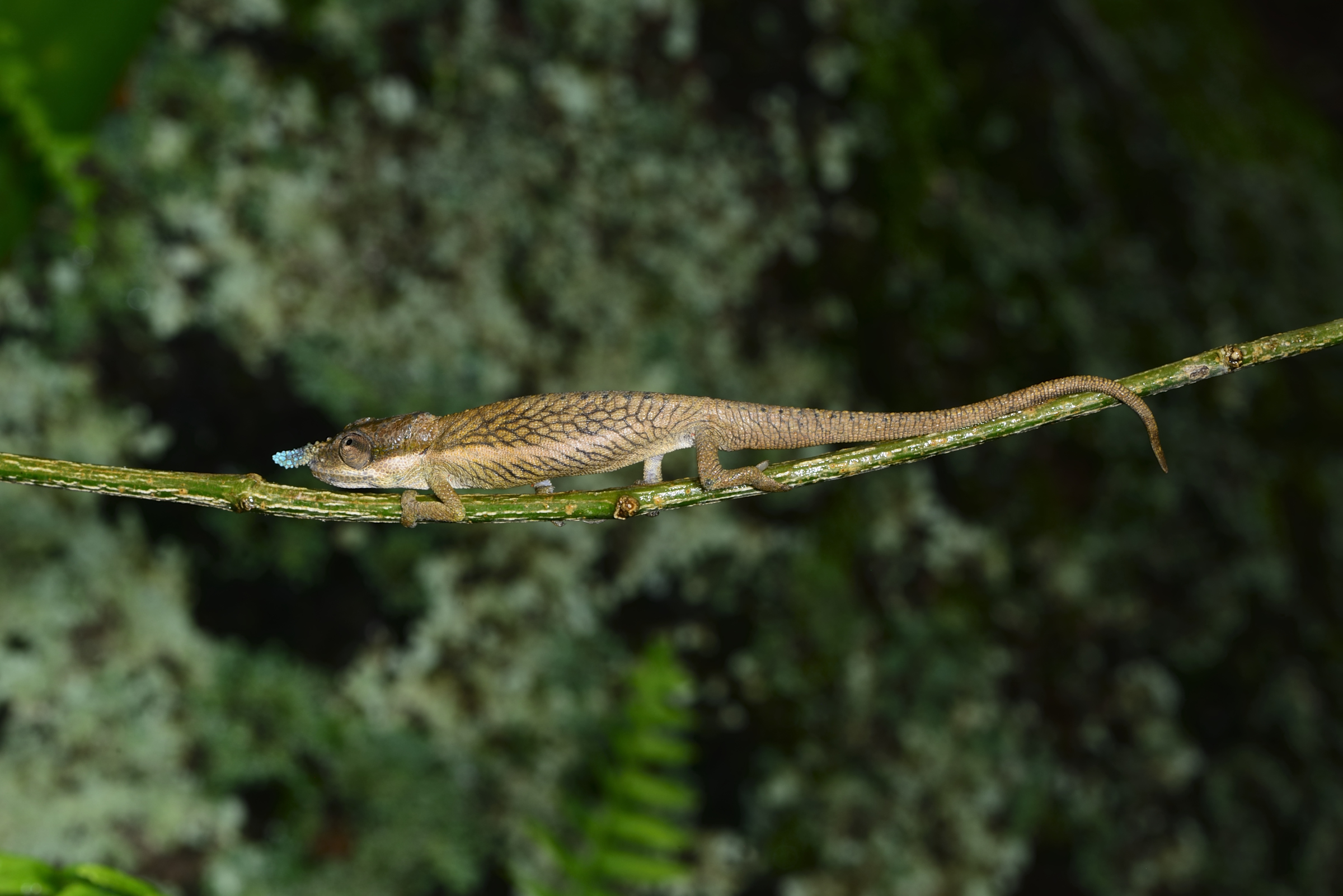 It came to me as some surprise that a specimen I collected from an area considerably lower down, in a tiny fragment of forest off the edge of a mining road, also belonged to this species. The specimen in question is remarkably different from the others, with a bright blue nose of a different shape. Nonetheless, genetic evidence points to it belonging to the new species, and so we included it there, but certainly more data will be necessary to examine their relationship more closely.

Having concluded that the species is indeed different to all others, and that no other names exist that might apply to it, we named the species Calumma gehringi, in recognition of Philip-Sebastian Gehring’s major contribution to the resolution of the taxonomy of the group.

This paper is by no means the last publication on the taxonomy of the Calumma guibei group, but its importance lies in clearing up the application of existing names, and giving a name to one of the best-known lineages. We will now be free to address the taxonomy of other lineages belonging to this clade that certainly constitute new species. Indeed, one such paper is currently in review in the Zoological Journal of the Linnean Society, and we hope it may be published in early 2018.

David is a part-time, self-funded PhD student and part-time highschool teacher. My own fieldwork in 2015–2016 took place as part of Expedition Angano, together with my teammates James Borrell, Lawrence Ball, Thom Starnes, Duncan Parker, Jeanneney Rabearivony, Marius Rakotondratsima, Elidiot Razafimandimby, and Denise Nomenjanahary. It was funded by the Zoological Society of London, Royal Geographical Society, Cadogan Tate, the Scientific Exploration Society, and by crowdfunders on Indiegogo.

One thought on “A small new chameleon from northern Madagascar”