The time has come for a new adventure.

Over the last year and a half, I have been preparing for an expedition to the Montagne d’Ambre (English: Amber Mountain) in northern Madagascar. The aim of the project: to conduct the field research that will be central in my PhD research, attempting to establish a new system in speciation research on this moderately remote but accessible mountain. Before I go, I wanted to share some information about the mountain, the expedition, and the research we are conducting. 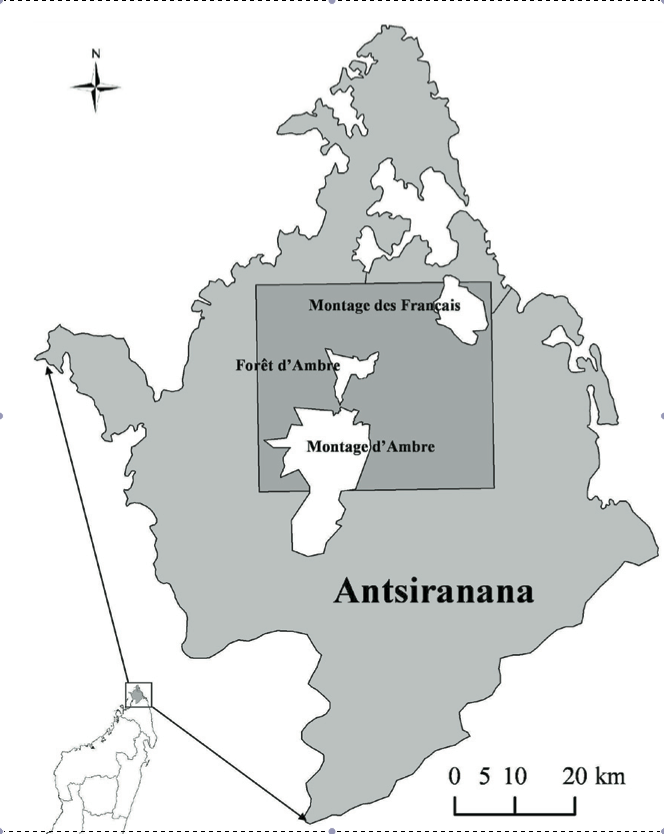 Montagne d’Ambre is an extinct volcano covered in lush tropical forest located close to Antsiranana (also called Diego Suarez or ‘Diego’ for short) near the northern tip of Madagascar. The mountain rises relatively gently (at least in comparison to Marojejy, which I visited in 2016) to an altitude of 1450 m above sea level, and its forests transition from dry deciduous forest to lush rainforest, to forest bordering on ‘montane’ near its peak. Volcanic activity on (in?) the mountain continued until comparatively recently, but it is thought to have been extinct for at least a few thousand years.

The mountain is a popular destination for tourists, and a few visit the park most days of the year, though they restrict themselves largely to the lower reaches of the mountain, and only more intrepid tourists reach the upper areas. Indeed, I have failed completely to find a single photo taken from the peak! As such, a network of trails exist in the forest, but it is not extensive, and many paths are not maintained.

The biodiversity of Montagne d’Ambre is moderate compared to other rainforested mountains of Madagascar, with just ~33 frog species and ~71 reptile species, but many of its species are endemic to the mountain, such as the chameleons Calumma amber and Calumma ambreense, and the frogs Cophyla puellarum, C. maharipeo, and C. noromalalae. Many other animals and plants are of course endemic to the mountain as well, including at least one bird subspecies (Monticola sharpei erythronotus). It is likely that several species of reptile and frog have also gone undiscovered so far, especially from the less explored areas of the mountain, for example on its western slopes.

If you would like to see photos of the chameleons of Montagne d’Ambre and their habitats, check out the awesome pages of MadCham.de! They even have 360° photos, like this one:

The expedition to Montagne d’Ambre will be two months long (~8th November 2017 to ~12 January 2018), but I will be in Madagascar for three months, dealing with permits either side of the field time. The day-to-day team in the forest is composed of myself, my colleague and friend Dr. Andolalao Rakotoarison, Safidy Rasolonjatovo—a PhD student from the University of Antananarivo, Jary Razafindraibe—a graduate student from my last expedition, and Angeluc—our guide from my last expedition, and one of the best reptile and amphibian guides in Madagascar. This of course without mentioning the local guides, cooks, and porters. We will also be joined for a month by two Master’s students from the University of Antananarivo, briefly by their supervisors Dr. Fano Ratsoavina and Dr. Zafimahery Rakotomalala, and later also for a month by my parter Ella Z. Lattenkamp. The project is funded largely by the Deutsche Forschungsgesellschaft grant behind my PhD project, but in part also by a National Geographic Society grant for Safidy’s part of the project.

While I cannot give away the details of the research we are planning, I do want to explain a little about the concepts behind it. The goal of the trip is to investigate a process known as Ecological Speciation (ES). ES is where adaptations to differing ecology are fundamental to the creation of reproductive barriers between lineages, thereby causing a speciation event. The underlying causes are myriad, and finding out exactly which are at play is no mean feat. ES can occur in sympatry, parapatry, and allopatry; the only thing needed is a substrate for ecological niche divergence.

Numerous examples exist that provide strong evidence of ES, in some cases through experimental study, in others through in-situ study, the best case studies being probably being Timema walking sticks. The work on ES so far, at least until 2012, has been excellently summarised in Patrick Nosil’s book on the topic, Ecological Speciation. The question is no longer of whether ES occurs, but rather why, how, when, and where. Identifying systems in which ES can be nicely and neatly studied is a key objective, as comparatively few exist where ES is beyond doubt the main acting factor in species divergence.

One observation that has emerged from several studies is that similar conditions in different locations tend to generate similar patterns of ES—this has been one of the observations from Timema studies, and is actually amazingly widespread in these insects (Soria-Carrasco et al. 2014). This principle seems to apply the other way around as well: a single ecological gradient should be able to generate replicate instances of speciation in different taxa occurring across it. So far this principle has only been demonstrated in one study system, the White Sands National Monument in New Mexico, USA, by Rosenblum & Harmon (2011). It is this aspect of ES that we will be studying, but in a somewhat different way, focussing on Montagne d’Ambre-endemic lineages of three chameleon ‘species’ and two frog ‘species’ (‘species’ here placed in quotation marks because of the expectation that each lineage is in the process of diverging and the numbers therefore fail to reflect the actual story).

That’s all I want to reveal at the moment. In the footer of my website, you will find a countdown of the days until the expedition sets off! Please let me know if you have any questions.