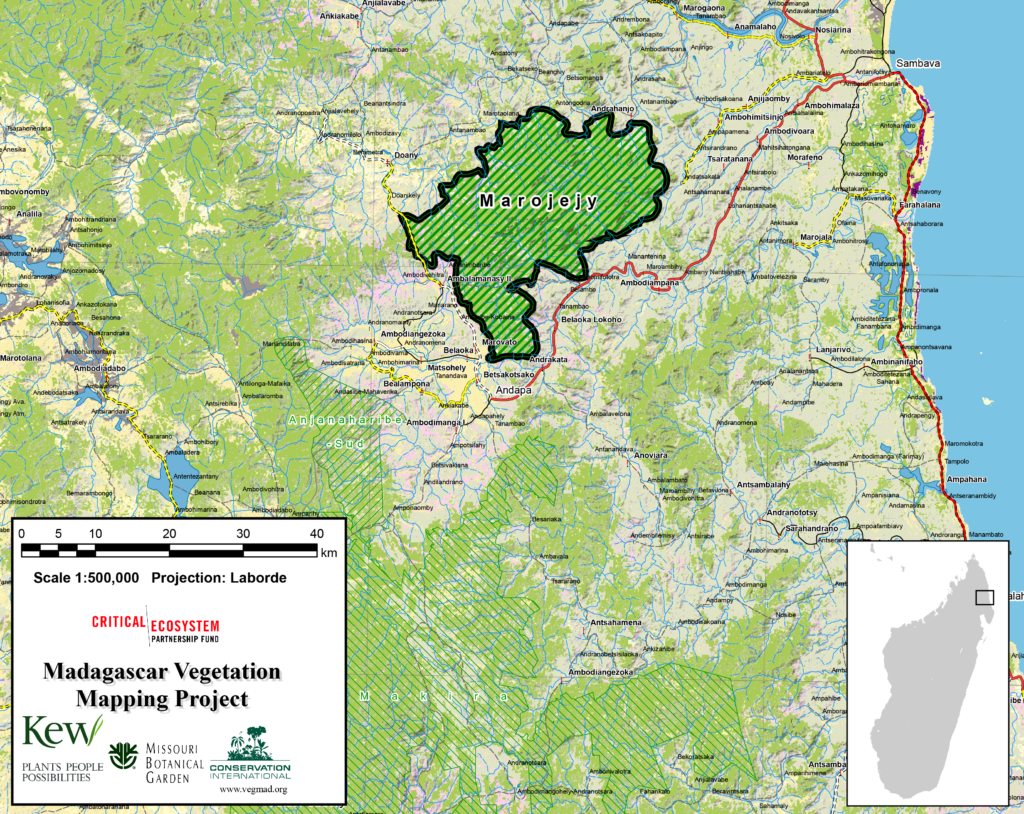 Marojejy is a rainforest-clad mountain massif in northeastern Madagascar. The park was established in 1952 as a strict nature reserve, but was changed to a national park in 1998[1]. Several notable biological research expeditions have been led to this mountain, the most significant of which was the Goodman expedition in 1996[2]. This expedition was one of a series of major biological surveys in Madagascar published in the journal Fieldiana. Their findings provided a baseline for future studies of the flora and fauna of many areas of Madagascar. In the case of Marojejy, this baseline knowledge on reptiles and amphibians was later expanded upon in further expeditions by other herpetologists.

The herpetofaunal diversity of the mountain is immense. To date, around 56 amphibian and 66 reptile species from the park have names (primarily summarised in Glaw & Vences 2007[3]). But as is typical in Madagascar, a large number of unnamed species are also known from the park, but are in the long queue to receive names.

From November to December 2016, I took part in an expedition to Marojejy to study the reptiles and amphibians of this park. Our research team included Professor Miguel Vences, three of his PhD students (Molly Bletz, Andolalao Rakotoarison, and myself), a Master’s student from the University of Antananarivo (Jary Harinarivo), and a professional herp guide (Angeluc Razafimanantsoa). After two weeks in the park, Miguel, Ando, and Molly left, and I was joined by Carl Hutter, a PhD student at the University of Kansas. As is typical of these expeditions, we were accompanied by a local guide (Eduard) and a cook (Toto), and often also by up to 18 porters to carry our heavy equipment over the treacherous terrain.

The ascent from Camp 2 to Camp 3 is pretty brutal, due to the combination of heat and high humidity with very steep paths.

The local guide, Eduard, was clearly a model in a previous life.

The ascent to the summit is a little worse than that from Camp 2 to Camp 3, but cooler, which makes all the difference

Marojejy is a fairly steep massif. It ascends fairly gently from 60 m above sea level (a.s.l.) at Manantenina (where the park office is located, and some two hours by foot from the edge of the protected area) to around 500 m above sea level, and then becomes increasingly steep, rising rapidly to about 2200 m a.s.l. The altitudinal cline creates a stark vegetational gradient, from lowland rainforest and bamboo forest, to mid-, to high-altitude rainforest, to cloud forest, and finally to dwarf shrub a the peak—a cline moreover that influences the distribution of reptile and amphibian species, such that communities at the bottom and top of the mountain do not share a single species.

The view at around 1300 m a.s.l., looking down on the lowland forests. At this altitude, you are somewhere in the transition between montane rainforest and cloud forest.

The view at around 1800 m a.s.l. At this altitude you are well into cloud forest, and the trees are becoming increasingly dwarfed.

The view from the peak, around 2130 m a.s.l. At this atltiude there is no more forest, only dwarf shrubs. This habitat is truly bizarre, and has several microendemic reptile and amphibian species.

The weather on Marojejy is typically very wet, but during our stay it was unseasonally dry. As a result, reptile and especially amphibian activity was less than we had hoped. Indeed, toward the end of our stay, there was a period so dry that even the most abundant and care-free frogs stopped calling. This week-long dry spell ended abruptly in an enormous storm, which had the desired effect of bringing back the frogs, but unfortunately also brought out the leeches in force, made conditions considerably more dangerous, and came on the second to last and last days in the field, making work almost impossible. Despite our weather troubles, we had a lot of success, especially at higher altitudes where humidity is more constant than toward the lower reaches of the mountain.

The park has three tourist camp sites, set up in the same sites the Goodman team used in their 1996 surveys. These are Camp 1 (456 m a.s.l.), Camp 2 (~750 m a.s.l.), and Camp 3 (1325 m a.s.l.). Our research took us to each of these camps and also the non-tourist Camp 0 (310 m a.s.l.), which is however still on the main path, and up to the peak, though we did not camp there. The facilities at each of the established camps are incredible, and include not just sheltered eating and cooking space, but also semi-European toilets (meaning sitting toilets that sometimes even flush!), flowing water (redirected from nearby streams with ingenious, partially bamboo piping), and bungalows for the tourists (we slept in tents to save money). This makes Marojejy one of the best provisioned parks in Madagascar for tourists in my experience, especially for those wanting to do something more extreme in terms of hiking, but still sleep, eat, and above all defecate comfortably.

Our expedition to Marojejy had two primary goals:

(1) to investigate probiotic bacterial communities on the skin of frogs

(2) to collect material of new and poorly known species of reptiles and amphibians in the park.

The Frog Probiotics research was part of a study that spans Madagascar; Molly’s PhD project. The moist skin of frogs is rich in bacterial communities. Within these communities are ‘good bacteria’ that help the frogs deal with infection and disease. Most importantly, some bacteria can help in the fight against the chytrid fungus, Batrachochytrium dendrobatidis (Bd) that is responsible for the extinction of hundreds of amphibian species worldwide. But isolating these bacteria is not easy, and samples from a single frog are often not representative of all members of that species. So data collection for probiotics must be done with fairly large sample sizes. Using nitrile gloves and sterile plastic bags, we caught at least five specimens per frog species studied, which were then carefully swabbed—all in all, the probiotics team managed to swab 200 frogs, belonging to 20 different species, including those pictured here:

My main role on this trip was to look for new and poorly known species. We identified a list of priority target species to try and find, including several known only from photographs or few specimens. In addition, we had several targets for ongoing projects; Ando for instance was focussed mainly on collecting Stumpffia species, which are the subject of her PhD, and Miguel and I searched specifically for several groups that we are currently working on. So, while we did not manage to capture the full diversity of the park, we did manage to find the majority of our target species. Here is a small selection of the species (targets and non) we found:

Stumpffia sp. Ca7 is one of the few known candidate species of Stumpffia not described in the monograph

For me, the most exciting find (aside from a really spectacular new species of Rhombophryne), was a big female of R. vaventy, the first species I ever described! Seeing these frogs in person is a totally different experience to seeing them in preservative. Disappointingly, we failed to find R. serratopalpebrosa, which would have been a key species to find to aid in the final resolution of the R. serratopalpebrosa group, which is nearing completion. In the end, we actually managed to find three of the species I’ve described in the last three years: R. vaventy, R. savaka (pictured above), and R. botabota (pictured above). 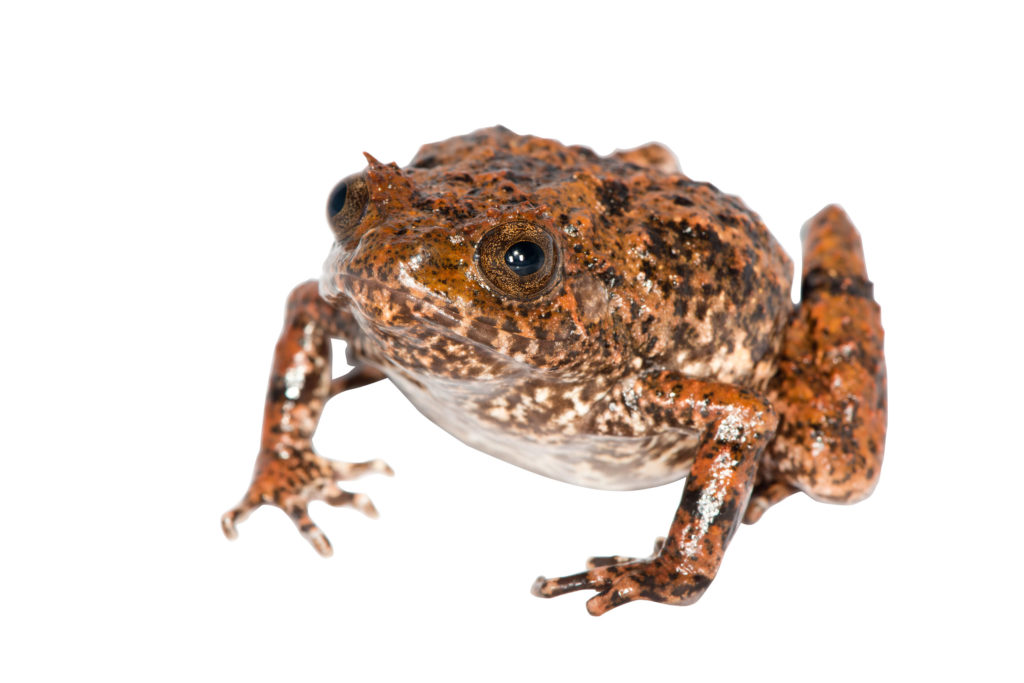 As for new species (by which I mean properly new discoveries, not known unnamed species), the trip was remarkably successful. Clearly new species number at least five for frogs, and may be more than ten for frogs and reptiles combined! Some of the specimens may need closer examination and genetic barcoding to rule out that they belong to known species, but all-in-all we are really pleased with our findings.

The habitat of Marojejy is really remarkable. Despite fairly high tourist numbers (and seasonally extreme weather), the paths are fairly well maintained, and the forest around them intact, so that few invasive species are to be seen deep into the forest, and the conditions are generally good. This came as a surprise, given that political unrest in 2009 led to logging, particularly of precious woods, deep inside the forest[4]. No trace could be seen of this activity. The forest, indeed, was far more intact than any I have worked in to date. I am pleased to say that the diversity, at least of reptiles and amphibians, is still in dire need of study, and that there are surely many more things waiting in the pristine forests of Marojejy to be discovered.