December 2016 was quite a month for Madagascar-related publications. Hawlitschek et al. published (in early access) a paper on the biogeography of geckos of the genus Ebenavia (paywalled); Schulze et al. described the ‘remarkably dull’ tadpole of Mantidactylus grandidieri (PDF); and Prötzel et al. reported two cases of potential hibernation by chameleons in Madagascar (PDF). Even I had a small paper come out: in Lattenkamp et al. we described the call of Stumpffia be (PDF). But I wanted to highlight two publications that came out in December with a common topic, which is of great interest from an evolutionary as well as a taxonomic perspective: skinks.

Madagascar’s skinks have been the subject of quite intense research in the last few years. Intense research is needed on this group for one simple reason: they are phenomenally complicated. One large endemic radiation from Madagascar has had repeated genus-level rearrangements recently. It had long been clear that several of the genera in this clade, and some species they contain, are para- or polyphyletic; the genus-level instability was highlighted in a paper by Angelica Crottini and colleagues (2009), who reduced the radiation from eight to seven genera by synonymising Cryptoscincus with Paracontias. Species-level incongruencies were exemplified in a paper by Aurélien Miralles and Miguel Vences (2013) that compared the performance of species delimitation algorithms in the genus Madascincus, revealing dramatic disparity between prevailing taxonomic nomenclature and phylogenetic relationships. In 2015, Miralles and colleagues took a strong step toward clarifying relationships of Madagascan skinks by dividing Voeltzkowia into Voeltzkowia sensu stricto and Grandidierina, synonymising Sirenoscincus with Voeltzkowia, and also synonymising Androngo with Pygomeles (Miralles et al. 2015), bringing the Madagascar-endemic radiation down to seven genera. I wrote a rather in-depth article on this paper, which you can read here. Then in January 2016 they updated the phylogeny of Pseudacontias and described two new species from that genus (Miralles et al. 2016a). The new research published in December follows this trend. 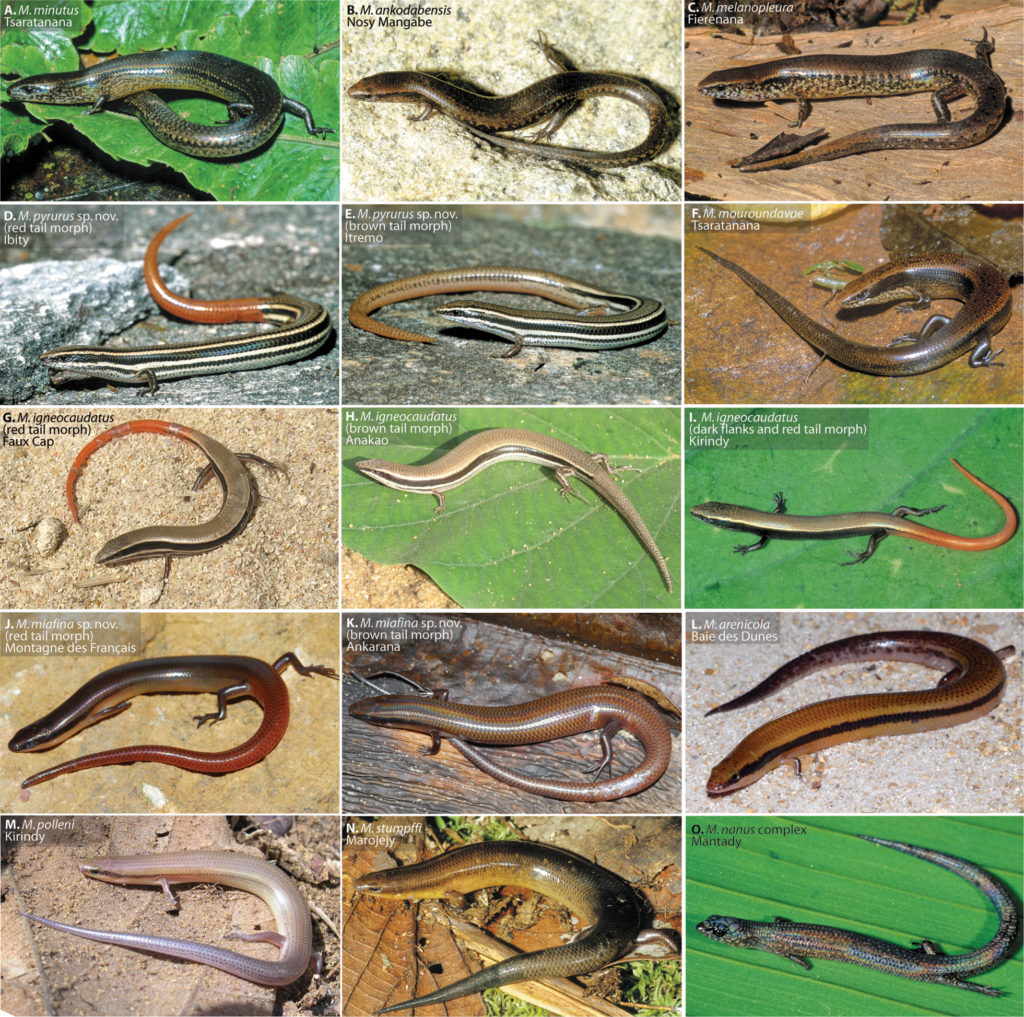 Skinks of the genus Madascincus, including the two new taxa described by Miralles et al. (2016b). Licensed under CC BY 4.0. Click the image to enlarge.

The two new species described by Miralles et al. (2016b) were consistently recovered as separate species by the delimitation methods implemented in their earlier study (Miralles & Vences 2013). Although the various algorithms they had tested did not always agree on many issues, and frequently over-estimated diversity, they almost all agreed that two clades should be recognised as distinct from species they had previously been assigned to—and in the new paper, they have done just that.

The new species belong to two different complexes within Madascincus: M. pyrurus is from the M. igneocaudatus clade, and is native to the central highlands of Madagascar. One of the most interesting differences it has to its sister species, M. igneocaudatus, is that it is oviparous, while its coastal sister is viviparous. So little is known about the reproductive ecology of these skinks that the significance of this difference is hard to know, but it is a surprising facet to the diversification of these skinks. Meanwhile, M. miafina is from the M. polleni clade. This clade is spread across western and northwestern Madagascar, reaching the northern-most tip of the island. Curiously, it is almost indistinguishable from the relatively distantly related M. polleni (far more so than to its sister species, M. arenicola), and the two species can be distinguished only by the number of scales around their midriffs. The description of these two species resolves one of the two key outstanding problems in this clade; the second is to resolve the M. nanus clade, but this will require considerably more data.

Erens et al. (2017) is just a short note in Molecular Phylogenetics and Evolution, but their paper is a significant one. Miralles et al. (2015) had already convincingly shown that the genus Amphiglossus was polyphyletic (though not for the first time), but did not take taxonomic action on this genus yet, leaving that for this subsequent publication (common practice in dealing with such complicated taxonomic issues, allowing a step-wise progress that is easier for everyone and has the added benefit of more publications). 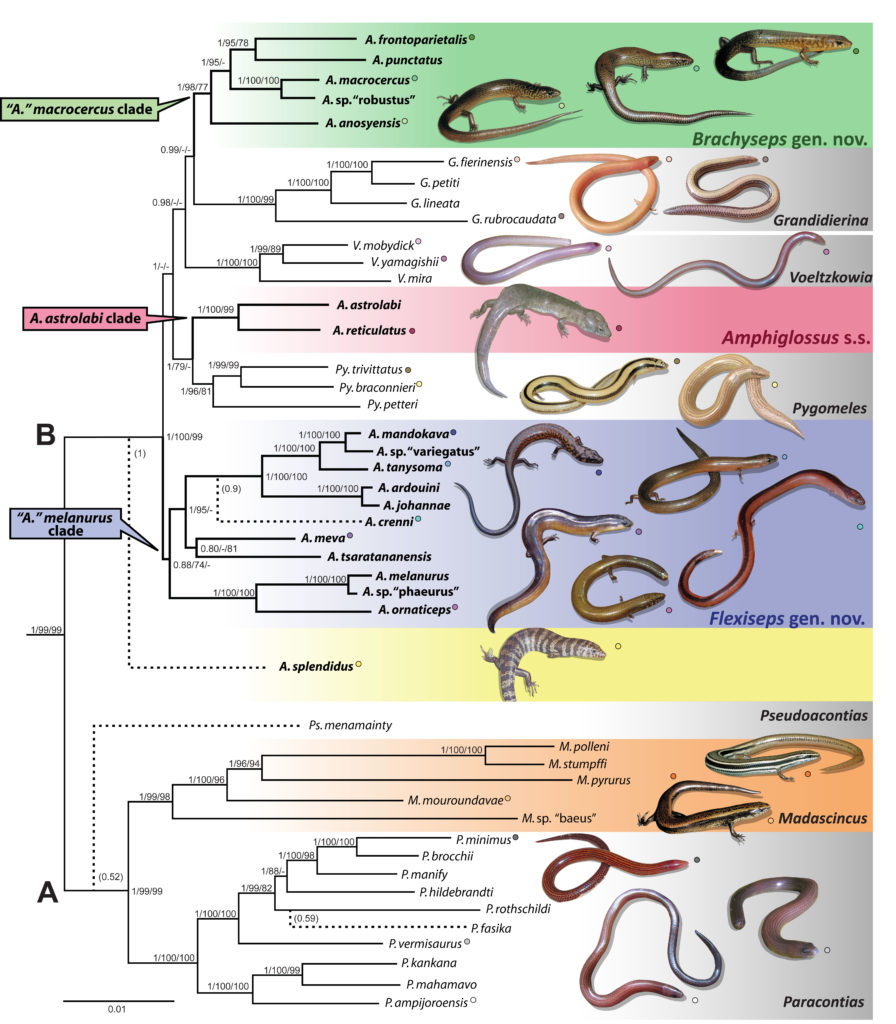 The phylogenetic relationships of Madagascar’s endemic skink radiation, highlighting the paraphyly of Amphiglossus sensu lato, and showing the relationships between the newly divided genera. This figure was generously provided by A. Miralles, thus overcoming copyright issues. Click the image to enlarge.

Based on an extended dataset over that used by Miralles et al. (2015), Erens et al. (2017) added resolution to the deeper clades within the Madagascan skinks, in particular to the relationships of Amphiglossus with respect to the other genera. They confirmed the earlier relationships, showing that ‘Amphiglossus‘ is in fact three separate clades, among which three currently recognized genera (Pygomeles, Voeltzkowia, and Grandidierina, dealt with in Miralles et al. 2015) are interspersed (see the tree on the right). To reconcile this result with monophyletic named units, they divided Amphiglossus into three: Amphiglossus sensu stricto, and the two new genera Brachyseps and Flexiseps. Because their tree was still not wholly stable, these taxa are not totally robust. Nevertheless, the former classification under a single nomen was not preferrable. Nor would it be helpful to unite all of these genera under a single robust name that would be totally undiagnosable. So they elected to divide the genera based on the best available data rather than continue to use a clearly polyphyletic and therefore useless name. This decision may be controversial, but it provides a new set of testable hypotheses that are based on better data than previously available, and are therefore likely to be adopted by the scientific community. The change brings us back up to nine genera in Madagascar’s skink radiation.

Perhaps the most remarkable outcome of the combined results of Erens et al. (2017) and Miralles et al. (2015) is that robust, terrestrial skinks are totally interdigitated by fossorial and consequently limb-reduced skinks, meaning repeated transitions to substrate-swimming in these lizards. This pattern is not entirely surprising for skinks, which have a bizarre tendency to lose their limbs and may even be able to re-evolve them once lost (e.g. Siler & Brown 2011), but it is exceptionally dramatic in Madagascar’s skinks. It makes this radiation a strong candidate for studying ecological lability and correlates of fossoriality, especially as the taxonomic relationships are increasingly clarified.

The new contributions to skink taxonomy have brought us near to completion of the taxonomy of the group. Naturally, a few pressing issues remain: the deeper relationships of the new genera need to be resolved firmly; the affinities of Amphiglossus splendidus remain to be clarified; the relationships of the genus Pseudacontias are also not yet resolved; and of course numerous species also remain to be described from across the phylogeny. The result of this progress, however, is an increasing tendency to look at larger evolutionary questions that are far more exciting. This is something that Miralles has done exceptionally well across several papers (particularly Miralles et al. 2015 and 2016a), exemplifying how taxonomic mysteries can also provide space for investigation of evolutionary trends and hypothesis testing. I find these papers quite inspiring in the way that they contextualise the taxonomy in an evolutionarily informative framework, and I hope to draw on their example in my own work.

December 2016 had a remarkable number of publications on the reptiles and amphibians of Madagascar; an unexpectedly pleasant ending to what had otherwise been a poor year in terms of publication numbers. 2017 is set to be a better year though, and there is a lot to look forward to—some of it very soon indeed!

Flexiseps (formerly Amphiglossus) johannae is one of the two species of Flexiseps found outside Madagascar. It is endemic to the French Indian Ocean island of Mayotte. Photo by Mark D. Scherz, 2014

2 thoughts on “Important taxonomic advances on the skinks of Madagascar”