Last week, a paper was published in the Open Access journal PLoS ONE, entitled ‘Distinct Patterns of Desynchronized Limb Regression in Malagasy Scincine Lizards (Squamata, Scincidae)‘, by Aurélien Miralles and colleagues. This paper dealt with a fascinating case of convergent evolution, and I thought I would share my thoughts on it. 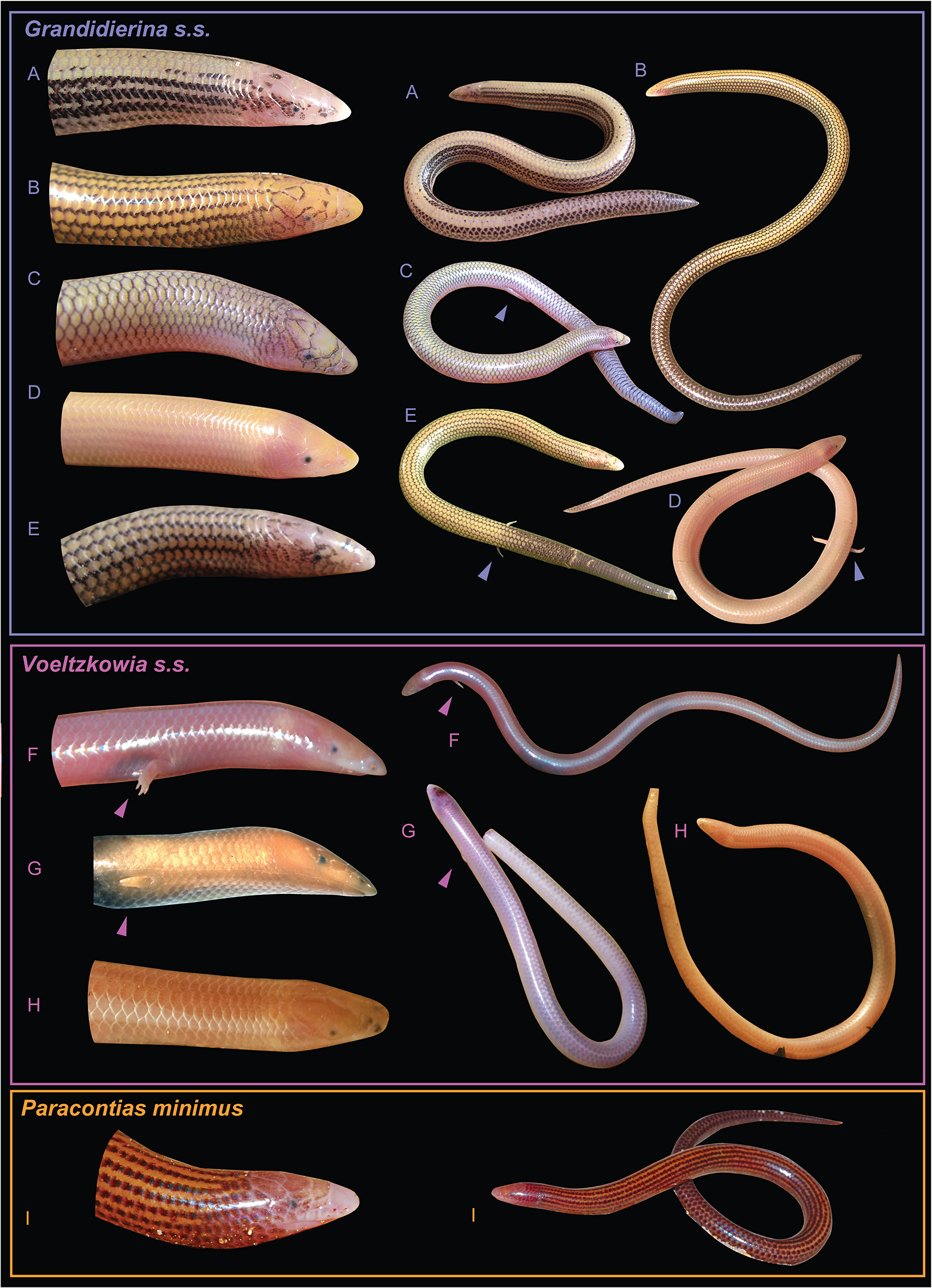 A figure from Miralles et al. (2015) depicting the new taxonomic groups based on their taxonomic conclusions (tree shown below). Licensed under CC BY 4.0.

As some readers may know, snakes are phylogenetically nested within the lizards. That is to say, all snakes actually belong to one giant radiation of legless lizards. They are possibly the oldest surviving lineage of legless squamates, and certainly the most successful, with multiple thousands of species. But they are far from the only ones. In fact, limb loss is something of a fad among reptiles. Members of numerous families have undergone these changes, the most familiar in Europe being the slow worm, Anguis fragilis; the most familiar in America being the glass lizards, with the creative name Ophisaurus (=snake lizard). Both of these are anguid lizards. But the vast majority of legless lizards belong to a different family: the skinks.

Skinks seem to have a penchant for losing legs. They are typically long, slender lizards anyway, but something about them has led them to lose their limbs dozens upon dozens of times, independently.

Madagascar makes an excellent case study for this phenomenon (although Australia is also a popular choice). In Madagascar, we have five genera of skinks that have lost their legs. The parsimony-lover might stack these all as being sister to each other, and leave it at that. Surely they all followed the same path, and it results in maybe just a few instances of limb loss, right? Nope.

Research primed by Angelica Crottini and colleagues (2009), and now drawn mostly to completion by Miralles et al. (2015), has made it very clear that that is not what has happened. Crottini et al. (2009) rearranged the taxonomy of some of Madagascar’s limbless skinks, by transferring one species from Cryptoscincus to Paracontias. They were unable to finish the taxonomic work they started however, because they had not gotten hold of sequences from several species, including a number critical for clarifying some relationships. While they had established that one species, Androngo trivittatus, should probably be moved to Pygomeles, they forestalled this transfer until more data were available.

The missing species have now been gathered by Miralles and colleagues, and the result is fascinating. 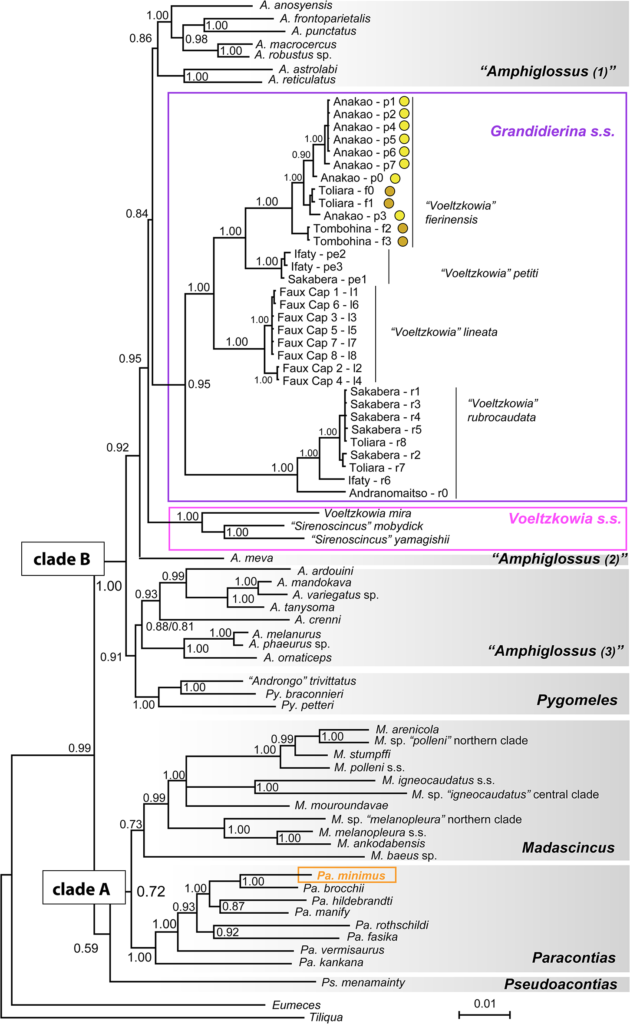 In their study, Miralles et al. (2015) produced a new, well-resolved phylogeny of a large radiation of Madagascan skinks, including most species currently recognized. Based on this phylogeny, it became clear that the genus Voeltzkowia is paraphyletic. In consequence, it became necessary to transfer all species of the genus Voeltzkowia except V. mira to Grandidierina, a very old former synonym of Voeltzkowia. Voeltzkowia mira, on the other hand, turns out to fall within a clade formed by itself and two of the three Sirenoscincus species. In consequence, both Sirenoscincus species have been transferred to Voeltzkowia. Meanwhile, they managed to sample the second species of Pygomeles missing from the analyses of Crottini et al. (2009), and in consequence, showed that Androngo trivittatus is indeed nested within this genus, and so they finally transferred it to the genus Pygomeles. All of these taxonomic changes were justified based on Criteria for Change set up by Vences et al. (2013; see my summary of this paper here). Their phylogeny showed quite clearly that the genus Amphiglossus is seriously paraphyletic, but they reserved making any changes until sampling is better.

They also demonstrated the first known instance of species losing its hindlimbs first, and subsequently becoming completely legless (Voeltzkowia mira). It is not clear why this is so common in the reverse direction, but seems to be unique in this direction. 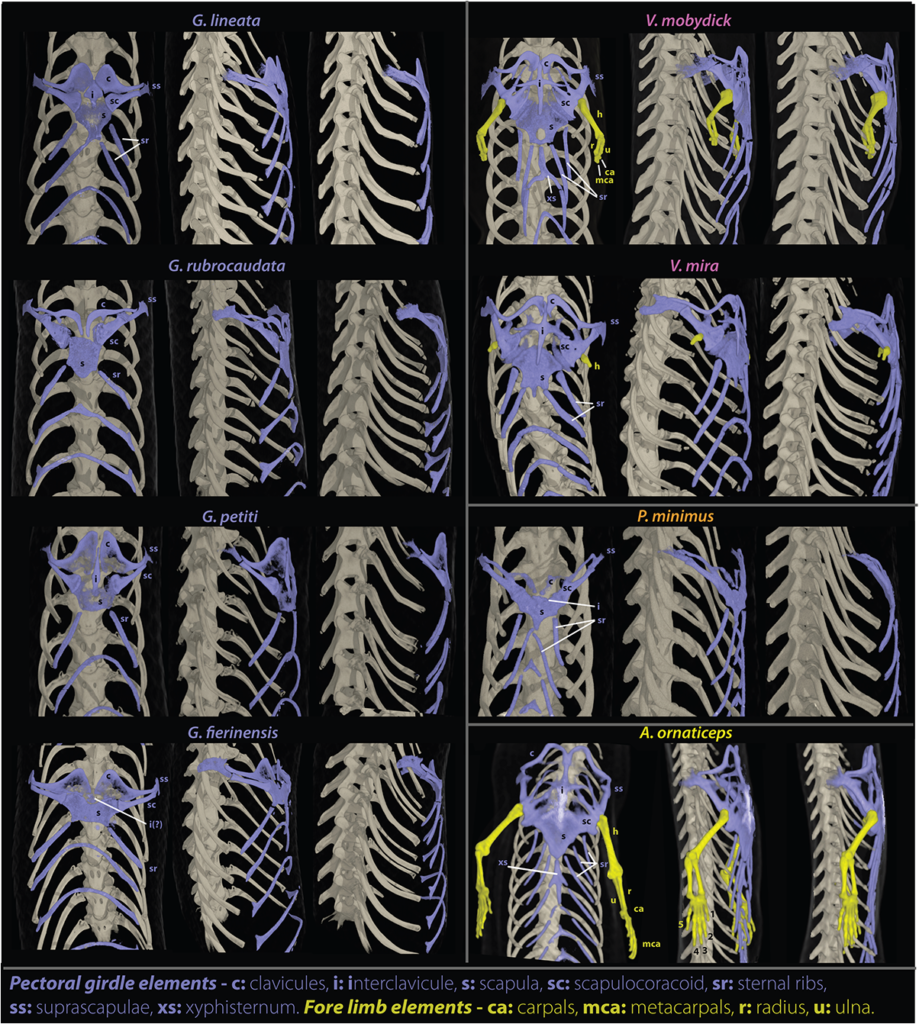 Pectoral girdles of selected members of genera studied by Miralles et al. (2015). Licensed under CC BY 4.0.

From there, they went on to produce an ancestral state reconstruction, to find out when and how often limbs were lost. Assuming no reversal is possible (a reasonable assumption), they concluded that forelimbs and hindlimbs were lost independently at least five times each. This highlights the ease with which skinks seem to make this transition toward a streamlined, limbless body type.

They went still further, and produced a dated phylogeny. This phylogeny, while pretty loose in terms of age ranges, clearly shows that Paracontias is the oldest case of limb loss among the specie studied. That might explain why all of its species are completely legless.

Finally, they considered a case of population genetics that is particularly close to my heart. In 2005, I went with my father, several other herp-enthusiasts, and Bill Love, to Madagascar for the first time. On one of the first nights in the field, we were camping on the beach at Itampolo, in south western Madagascar. The sand there was full of squiggles, that Bill told us were made by a lizard he had never seen. Not long thereafter, I was walking with him and my father, when we saw one of the squiggles forming in front of us. I dove for it, and pulled up a handful of sand. Letting the sand slip through my fingers, I was left, very fortunately, with a pink, almost blind, almost legless, lizard. At the time, we didn’t know what it was, but Bill said it was something new, related probably to Voelztkowia fierinensis — now, according to Miralles et al. (2015), Grandidierina fierinensis. (See Bill Love’s picture of the G. fierinensis in my hands by clicking here!)

Two years later, upon the publication of Glaw & Vences’ guide to the Amphibians and Reptiles of Madagascar (2007), I found this species featured under the name ‘Voeltzkowia sp. “pallida”‘. It turns out that they, too, agreed that it was something new. Not only is this form different in colour from G. fierinensis, being far paler and lacking dark markings seen in that species, but it also differed in several key measurements and scale counts. 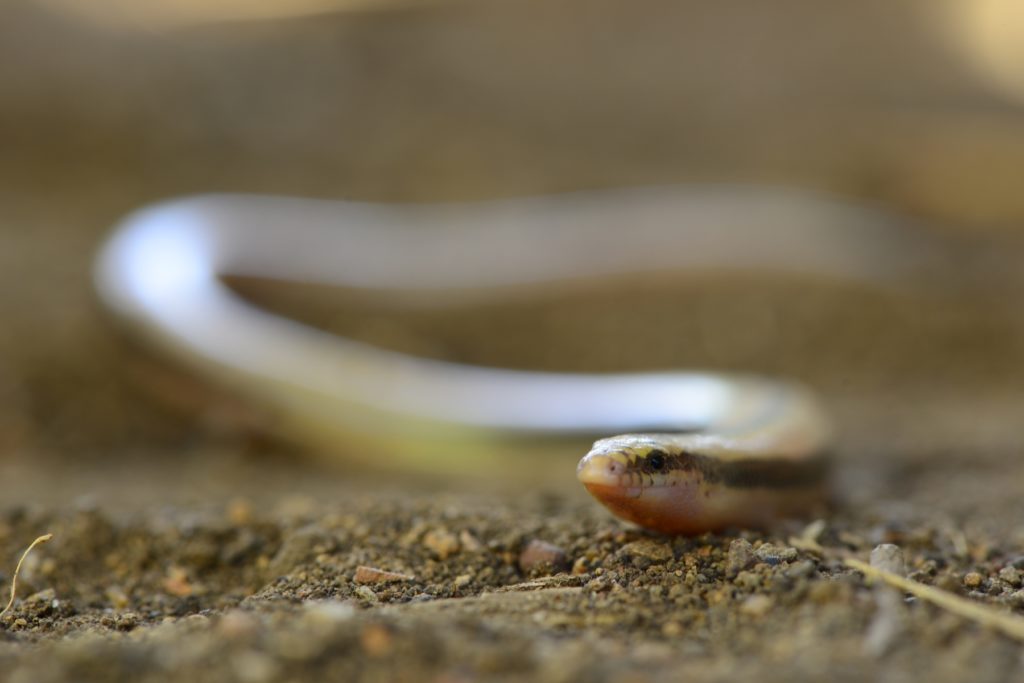 Now, finally, this curiosity has been investigated. But the results are far from what anyone was expecting.

The multi-gene phylogeny of several individuals of G. fierinensis and G. sp. ‘pallida’ found these forms to not constitute monophyletic groups. On the contrary, they seemed to show no pattern. The authors looked at genetic haplotypes, and found that here, too, there was no clear pattern – they seem to share everything. Curiously, though, the two forms are not found in the same locations. In consequence, the two forms are currently to be treated as belonging just to the species G. fierinensis, but to constitute two morphotypes within it. It seems that these two forms are either in the process of speciation and have a lot of genetic interchange, or that they do not represent separate species, but rather adaptive forms associated with substrate and climate. The pale form is found in white sand, while the darker ‘typical’ form is found in sandy substrates containing earthy materials.

The authors discuss at some length the reasons for limb loss. They note that species living in sandy substrates and in south western Madagascar have tended to lose forelimbs first, while those living in less sandy substrates elsewhere in Madagascar, have lost their hindlimbs first. It seems that if your mode of propulsion is serpentine, even with legs, you have a certain tendency to lose those legs over many generations. Depending on the environment in which this transition is occurring, forelimbs or hindlimbs may go first, but also retention of at least one pair of limbs may also be tied to this.

Madagascar’s skinks present fascinating avenues of research. Not only are they extremely diverse, but they have also pursued many curious evolutionary paths, some of which have taken them repeatedly in the same direction, as seen here. Others, have been drastically different; the genus Amphiglossus contains not just species that are soil swimmers, with hugely elongated bodies and small limbs, but also some real swimmers; aquatic and semi-aquatic skink species. The amount of potential for investigation, and the varied methods that can be implemented to achieve it, is really mind-boggling.