With over 4% of the planet’s named frog species, Madagascar is one of the hottest amphibian hotspots in the world. That number is rising rapidly; earlier this year Madagascar surpassed its 300th described frog. With estimated species numbers above 500, this climb is not expected to end in the near future. While some of the species that await description look just like their closest relatives (so-called ‘cryptic’ species), others are spectacularly different. 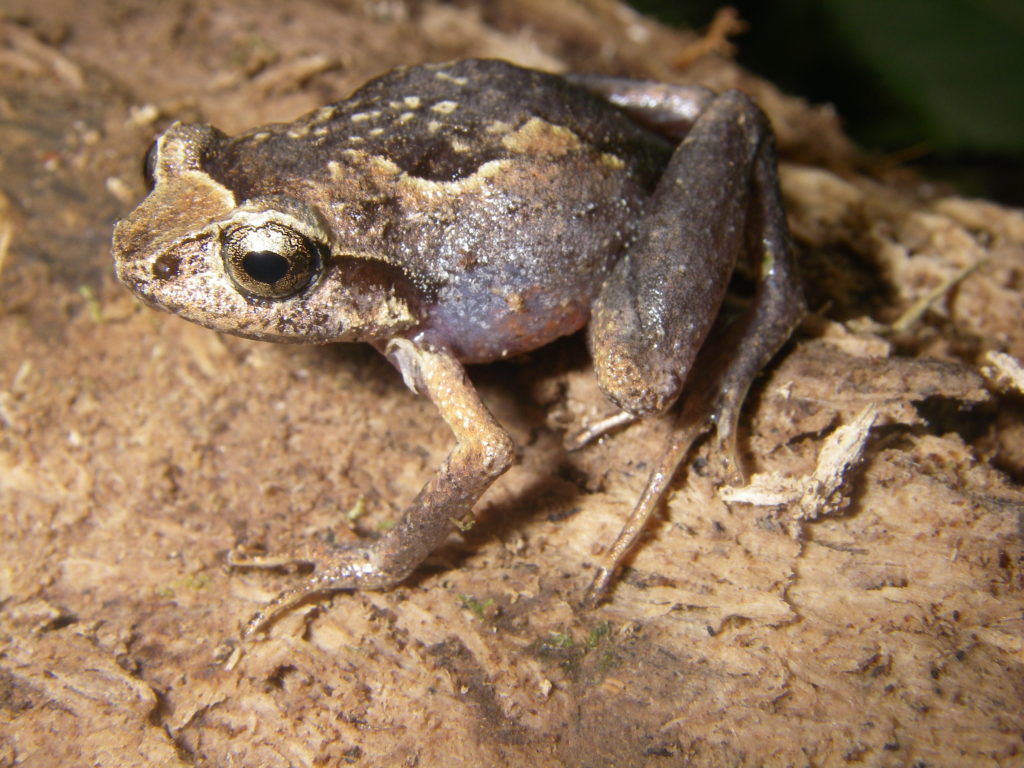 Meet the long-legged diamond frog, Rhombophryne longicrus; the newest species to swell the ranks of Madagascar’s diversity. Like the other diamond frogs (genus Rhombophryne), it is small, brown, and unassuming. But when the field team discovered it, they instantly knew this was something new.

From what little is known about the ecology of just a few species, diamond frogs are thought to be mostly burrowers. And indeed, some species are clearly adapted for that lifestyle, with short legs and arms, round bodies, and large, hard projections on their hands and feet called ‘tubercles’ that help them dig.

Not so the long-legged diamond frog. This species is characterized by long legs and arms that are particularly slender. Such long limbs are hardly appropriate for excavation. To investigate this further, I looked not only the external appearance of this new frog, but also at its skeleton by means of micro-CT scanning (3D reconstructed x-ray models). Subtle differences in its hip, in addition to its longer arms and legs, support the idea that this frog is capable of longer leaps than its relatives, and consequently lives somewhat differently from all of them.

All but one, that is. The minute diamond frog, R. minuta, about which almost as little is known as the new long-legged diamond frog, is somewhat similar. Its arms and legs are nearly as long as those of R. longicrus, but it is much smaller in size. Like the long-legged diamond frog, it is not known to dig. Genetic analysis revealed that these two are also closely related. Together, they form an unusual pair among otherwise digging species, expanding our understanding of the diversity of diamond frogs.

The new species hails from Sorata, a massif in northern Madagascar that is bound by only a thin strip of dwindling rainforest to the forested mountain chain that traverses Madagascar’s north. While Sorata may be well-forested for now, it is also unprotected. As a result, species restricted to these places are threatened with extinction. Already in its description, my colleagues and I preliminarily assessed the long-legged diamond frog as Endangered. Action is needed to protect the forests of Sorata, and other mountainous massifs in northern Madagascar, to prevent the extinction of not just the diamond frogs, but also other species named and unnamed, that call this region home.

The paper was published on the 16th of July in the Open Access journal Zoosystematics and Evolution.