The story of the discovery of this frog is quite a thrilling one, but as I was not involved, I’ll let Shea tell it:

“In late January of 2015, Carl Hutter and I set out on what was to be a 14-day expedition to the north of Ranomafana National Park, along with a team of four Malagasy guides and two research assistants. We planned on visiting two sites, starting with primary rainforest above the village of Miaranony, and then heading west through the forest to a site above Andemaka, a former village (now just a few family farms) near the the north-western extreme of the Park. After four days of not finding anything likely to be an unknown species in Miaranony, we began to pin our hopes in this regard on Andemaka. [shown in the embedded map]

“However, we were told by locals that there was no usable trail to Andemaka through the forest (only about 6 km afield, as-the-crow-flies), and instead that we would have to descend 500 m back to the valley floor, cross the Fanavory river repeatedly as we made our way up the valley, and then climb 500 m back up to the forest site above Andemaka. Understandably, the local porters wanted much more compensation for this than we had previously accounted for. At this point, we were torn—should we even go to Andemaka, given that it might not produce different species than Miaranony?

“After some consideration, I volunteered to scout the route, along with two of our guides, Emile Rajeriarison and Ralaivao Jean Fulgence, and one porter, Rakoto. The plan was for me to get an impression of the route, as well as the frog diversity, and then send word back to the rest of the team with Rakoto. The walk was just as challenging as the locals had warned; it took us all day to walk only 16 km, and the river crossings of the high-running Fanavory had been frequent and challenging, especially while carrying a full pack! Although I did not hear an abundance of unusual calls after we arrived that night, the habitat of Andemaka seemed quite promising, given our previous experiences in high-elevation areas of Ranomafana. I sent word to the rest of the team and hoped to see them in a couple of days.

“As is often the case when doing rainy-season fieldwork in Madagascar, things did not go according to plan. After I left Miaranony, continual and heavy rains had flooded their campsite entirely, and turned trivial stream crossings into dangerous ones. The Fanavory was likewise heavily flooded. After consulting via cellphone with the biological station at Ranomafana, Centre ValBio, Carl and the rest of the team decided the safest and best decision would be to return to the biological station. They had been advised by CVB that the weather was likely to get worse before it got better, especially over the next five days. Nevertheless, local porters were still willing to make the walk to Andemaka, in order to bring us research supplies and the remaining expedition food. The supplies were sent, along with a note containing an explanation of the situation. And that is how I found myself unexpectedly “stranded” in a remote forest camp for nine days during the middle of the rainy season! 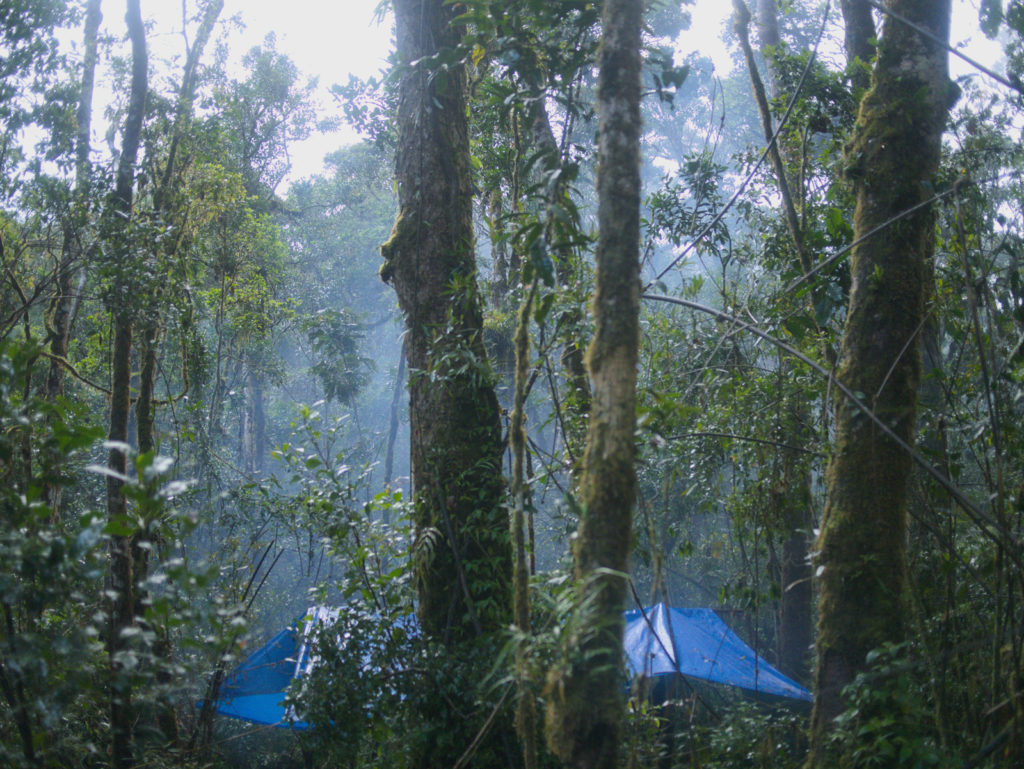 “Luckily, I had good company. Emile is a highly experienced guide and speaks English quite well, and Ralaivao (“Tsimba”), always in good spirits, is the best frog-finder I’ve ever worked with. The next nine days were far from easy, as I tried to do the work of 2–3 people on my own, but I will forever hold the experience close to my heart.

“Andemaka did not turn out to contain a treasure-trove of undescribed species, but one discovery in particular made the entire experience well worth it. During the day, especially after heavy rain, we noticed a conspicous call carrying through the forest. It reminded me a bit of the cooing of a dove, or the soft hooting of an owl, but Emile and I both agreed that it was likely a species of microhylid frog calling, and probably a fairly large one. We also assumed they were calling from some type of refuge, perhaps a tree hole or underground cavity, as is typical for microhylids, and knew that this would make it quite a difficult frog to track down. Given all the other work to be done, there was little time for me to devote to tracking this mystery frog down. Luckily, I had just the right person for the job – Tsimba. I soon tasked him with looking for these frogs during the day.

“Eventually, Tsimba was able to track two calling individuals to general areas, one alongside a stream at the base of our camp, and one in the forest a few hundred meters away. However, we were unable to locate the frogs themselves, which called only sporadically, and seemingly from underground. As our exit date grew nearer, I began to give up hope of ever finding this mystery frog. But the following morning, Tsimba arrived in camp wearing a large smile, carrying a fat microhylid frog he’d retrieved from a cavity beneath some tree roots, which turned out to be the paratype of Rhombophryne nilevina. This renewed our vigor, and we made one last attempt at recording calls and digging out the individual calling from a burrow alongside the stream close to camp. This time, we were successful! I knew at the time that these frogs were valuable specimens, and quite possibly a new species, but was unwilling to make a firm diagnosis, given my limited experience with closely related microhylid species. Luckily, Carl and I knew just the right person for that job – Mark Scherz!”

A few months after their discovery, Carl and Shea showed me pictures of their find. To me it seemed clearly to be something special, and quite possibly a new species. There are indeed few species that could be confused with this one, especially in this part of Madagascar. But because it is hard to tell the difference between Rhombophryne and Plethodontohyla, we had to wait for genetic barcode data to confirm its assignment. In particular there were some other similarly large Plethodontohyla species I wanted to be able to rule out that could occur in this area of Madagascar. But when the genetics came, it was clear: this was indeed a new species. And so we embarked on the description.

Stereoscopic 3D (magic eye) image of the skeleton of the holotype of Rhombophryne nilevina. The effect is easier to achieve the smaller the image is.

Rhombophryne nilevina holds several accolades from the start: Firstly, it is the largest member of the genus Rhombophryne to date, narrowly outstripping R. laevipes for the title, with R. vaventy being the next largest. Second, it is the southern-most species of Rhombophryne described to date. This title has been a bit confused because R. alluaudi is a serious taxonomic enigma, but its assignment is currently being cleared up by myself and some colleagues, which will make R. nilevina the southernmost Rhombophryne. Molecular barcoding currently places R. nilevina sister to a candidate species from the north, but that status is questionable, and will be clarified in a revision of the genus that is under way but at an early stage of writing.

Another curiosity is the call of this species. Subterranean calling is relatively rarely known in Madagascan frogs, despite the fact that several species in the subfamily Cophylinae (a microhylid radiation endemic to Madagascar) are fossorial and at least breed in burrows underground. The call is a low groan, similar to some other large, fossorial cophyline species—especially Rhombophryne testudo. But unlike that species, whose call is a crescendoing groan, the call of R. nilevina is amplitude modulated. This structure is new to the genus Rhombophryne. Here, have a listen:

Rhombophrne nilevina shows just how much there still is for us to learn about Madagascar’s cophyline frogs; numerous new species of Rhombophryne and dozens of new species of other cophyline microhylids await description, not to mention the dozens that doubtless have yet to be discovered. Few, though, are likely to be as spectacular as this one. And yet, while we discover and describe numerous new species from this subfamily every year, our poor knowledge of their habits is thrown into ever greater relief. The calls of many are yet unknown, let alone their reproductive modes; basic information that is key to understanding their evolution, ecology, and conservation.

Exceptionally, we have recommended that R. nilevina be listed as Data Deficient on the IUCN Red List. Although I have tried to avoid this in my recent work on Madagascar’s amphibians, we know so little about this new species that we are unable to give even the most basic estimate of its distribution, and rather than risk inflating the risk by assessing it as Critically Endangered (due to it being known from only a single site), we have forestalled a risk evaluation until at least a little more data become available.