While I have been focussing most of my efforts over the last months on the most important publications for my PhD thesis, I’ve still been involved in a number of other papers. This week, two of these have been published: two new species of Guibemantis frogs from northern Madagascar published in the European Journal of Taxonomy, and a revision of the gecko genus Ebenavia with three new species and one revalidation published in The Science of Nature (formerly Naturwissenschaften). Together these five new species bring me well over the milestone of 50 described species—an exciting achievement for me, especially to have attained it so quickly; just four years after my first publication. The latter, published today, is also my tenth publication of 2018!

Madagascar is home to two radiations of plants in the family Pandanaceae, a group collectively known as the ‘screw palms’ due to their palm-like fronds and spiralling growth habit. The biogeographic history of these plants is actually fascinating, with one group (Martellidendron) having colonised the island considerably before the other (Pandanus subgenus Vinsonia), but the latter being considerably more speciose than the former (Gallaher et al. 2015). These plants offer something rare among the modern plant fauna of Madagascar: they form phytotelms. That is, they store water at the base of their fronds, in a way reminiscent of (but less effective than) neotropical bromeliads. Much like the neotropical fauna, Madagascar’s frogs have also evolved to take advantage of these phytotelms for the raising of their tadpoles. In particular, there are two groups of frogs that apparently reproduce more or less exclusively in the leaf axils of Pandanus palms. One of these, a small assemblage of Platypelis species, I will talk about another time; the other is a sub-group of the genus Guibemantis, conveniently named Pandanusicola (the Latin suffix -cola means ‘dweller’ or ‘inhabitor’). 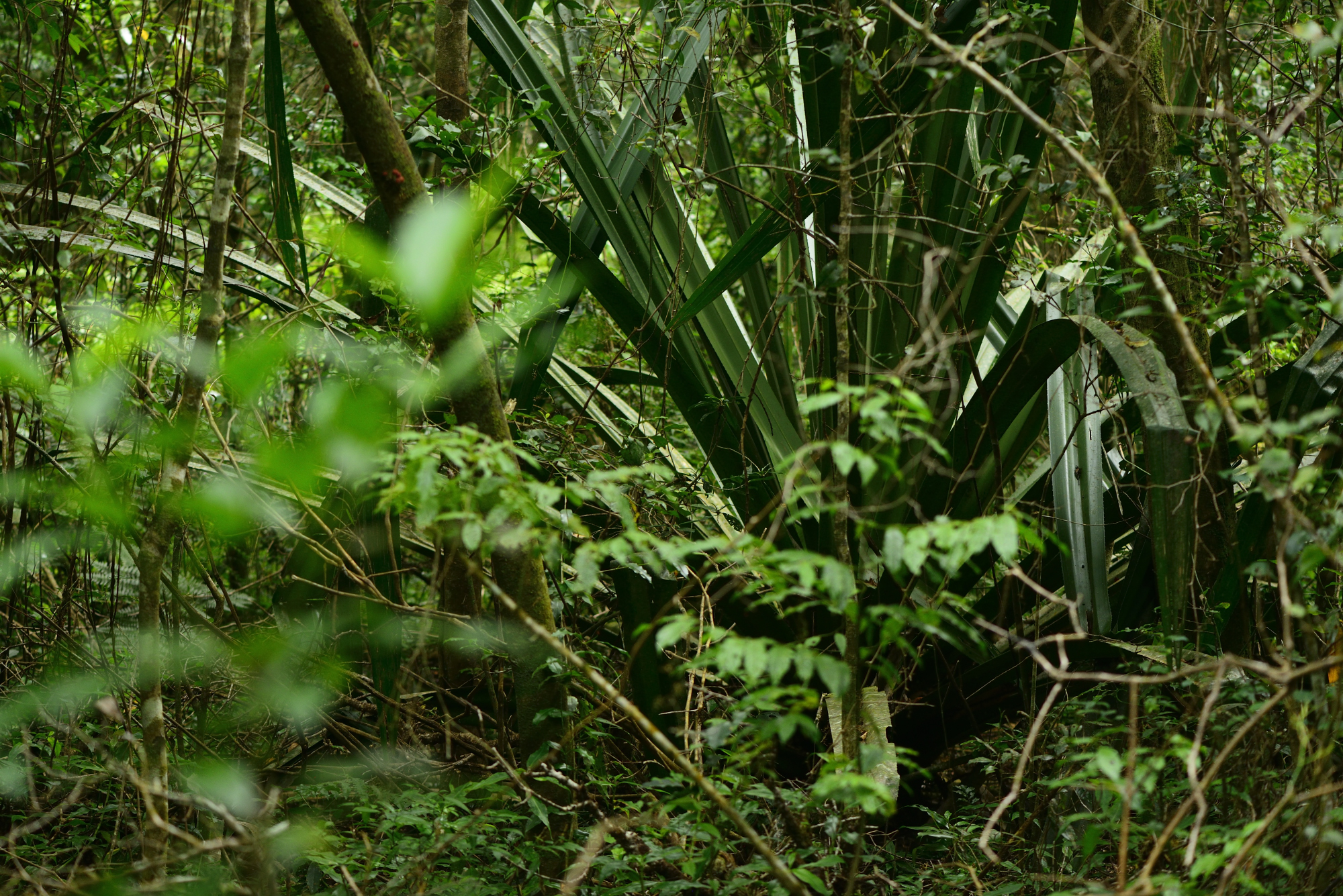 The Pandanusicola are interesting in a number of ways. Firstly, their phytotelmic lifestyle has led to a series of morphological specialisations, including reduced body size compared to other members of the genus Guibemantis, and especially dramatic differences in tadpole morphology, with elongated tails and specialised mouthparts. Secondly, two species appear independently to have reversed the phtytotelmic breeding habit, and instead breed in very slow-flowing water, marshes, or lakes. Thirdly, the distribution of the subgenus is… puzzling. In several cases, species from distantly separated areas are sister taxa, while the species which occur together in a single location belong to two different lineages. To add still further to the confusion, species that look almost identical in terms of colour pattern need not be closely related; they appear to evolve the same kind of colour patterns repeatedly. As a result, taxonomic progress on this genus is somewhat complicated by the fact that the frogs look so similar.

This year, my colleagues and I have have published two papers already on members of the subgenus Pandanusicola. The first described Guibemantis (Pandanusicola) milingilingy (pictured above), a small member of the genus from the peak region of Marojejy at nearly 2300 m above sea level, which we discovered on our trip there in 2016 (read about that trip here; Bletz et al. 2018). Yesterday (19 July 2018), our second paper on the subgenus was published. This latest study was led by Professor Rick Lehtinen, who is probably the world’s foremost expert on Guibemantis, and who has written rather a large portion of the existing literature on Pandanusicola in particular. In this paper, we have described two new species of the genus: G. (P.) woosteri from Marojejy and possibly Ambatovaky, G. (P.) albomaculatus from Montagne d’Ambre and Manongarivo. The frogs are not especially remarkable; they are presumably both like other members of their genus in their reproductive habits, and differ from other species in a few chromatic and morphological characters.

Unlike G. (P.) milingilingy, both of the new species were initially identified as candidate species in the barcoding study of Vieites et al. (2009) which revealed just how many species of frogs in Madagascar remained undescribed—at the time, it was around 200. Since then, over 100 species have been described, but also many more have been discovered and barcoded, and as a result, we are in fact not much closer to completing the taxonomic inventory of Madagascar’s frogs than we were then.

The new paper is open access, and you can read it here or get the pdf here.

A revision of the clawless geckos

One of the most enigmatic gecko genera in Madagascar are the clawless geckos, known in German as the Pinselschwanzgeckos (brush-tailed geckos)—genus Ebenavia. They are small, nocturnal geckos, which shelter during the day in crevices, such as those between fern fronds, in dried bracts, and among treefern fibres. Until now, two species have been recognised: Ebenavia inunguis, which was thought to be widespread across most of Madagascar, and even found on the Comoro archipelago and Pemba; and E. maintimainty, a smaller, darker-coloured species restricted to the far southwest of Madagascar. In 2016, Dr. Oliver Hawlitschek and colleagues published a paper on the biogeography of Ebenavia inunguis on the Comoro archipelago (Hawlitschek et al. 2016). In that paper, they showed not only that Ebenavia apparently colonised the archipelago twice, but also that the oldest of these lineages was found on the youngest of the islands—a biogeographic conundrum. In their phylogenetic analysis of the genus, it was clear that there are numerous, extremely deeply divergent lineages within E. inunguis, several of which should doubtless be recognised at species level. It is this taxonomic revision, led once more by Dr. Hawlitschek, that we have today published in The Science of Nature. It resulted in three new species, a revalidation, and several deep lineages that will require future re-assessment when more specimen material is available. 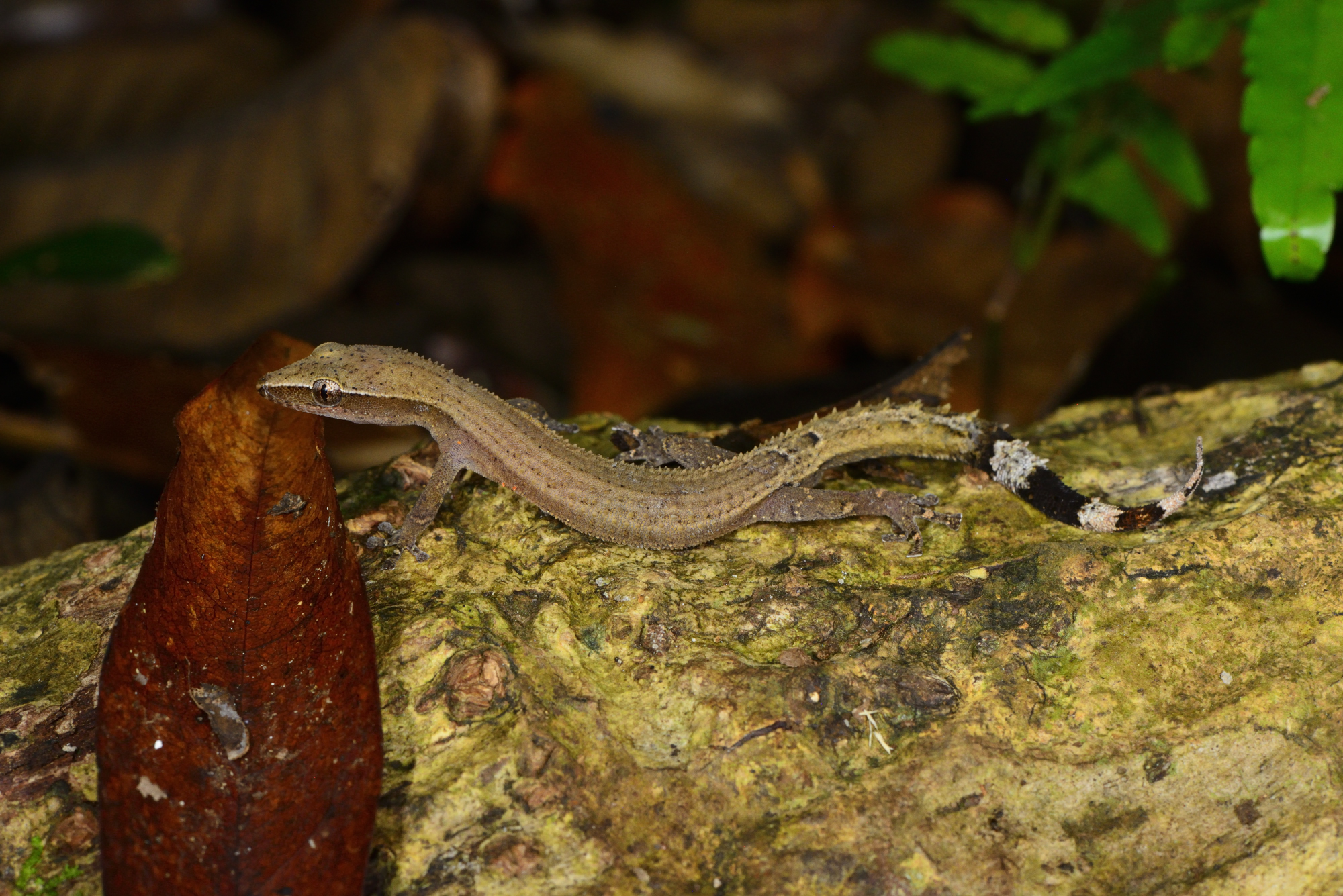 Ebenavia safari, a newly described species from northern Madagascar, which also occurs on the Tanzanian island of Pemba

So, how did so many species of Ebenavia go unnoticed for so long? Well, the genus is a truly cryptic one. To get an idea of how many species we were dealing with, we ran several different species delimitation algorithms on the phylogeny. These algorithms are, in a way, stupid; they are informed solely by genetic data, and depending on evolutionary rates, this can yield too few species, or, more commonly, far too many. There are a lot of criticisms of these algorithms, e.g. Leaché et al. (in press), which explains mathematically why the commonly used algorithm BPP overestimates species diversity. Nevertheless, they are a good approach to guide closer taxonomic investigation. The cautious taxonomist will typically find themselves lumping several lineages delineated by BPP, to avoid over-inflation.

This is precisely what we did. We compared three delimitation algorithms, the most conservative of which was BPP, yielding fifteen (!!!) taxonomic units. Under ideal circumstances, with enormous sample sizes, one could take a clustering algorithm to morphological data, and deduce the optimal number of morphospecies that way, then compare these clusters to those recovered by molecular delimitation approaches. Such algorithms, however, typically require hundreds of samples—not the tiny sample sizes available to taxonomists. So, it was necessary to make the final taxonomic decisions in a subjective manner. By examining specimens of each species and the biogeographic contexts of the lineages, we unified the fifteen OTUs into five: Ebenavia robusta from central eastern Madagascar, E. tuelinae from the Comoros (not including Mayotte), E. safari from Pemba and northern Madagascar, E. boettgeri from almost the length of the east coast of Madagascar, and E. inunguis itself, which is now restricted to the Sambirano region in west northern Madagascar, especially the island of Nosy Be. 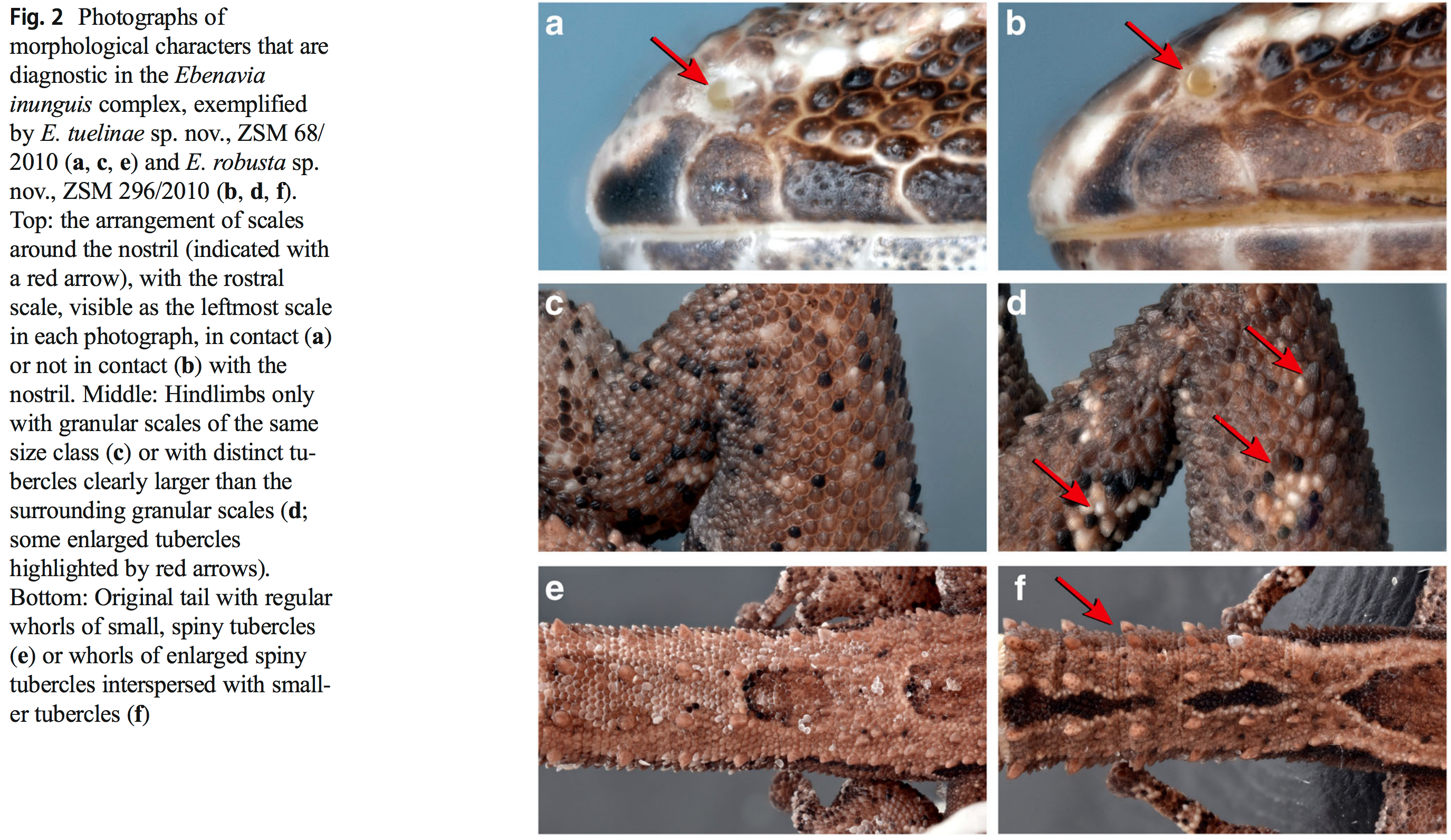 The morphological differences between the newly described species are extremely subtle, and in some cases, a definitive distinction in a one-to-one comparison, or with just a single specimen in hand, is a serious challenge. There are, however, differences: E. robusta, from central eastern Madagascar, is the easiest to recognise, with distinctly more tubercles than other species; E. tuelinae is the only species found across all of the Comoro archipelago except Mayotte, and also has more, smaller dorsal tubercles than other species; E. safari is the only species found on Pemba, but is also found in northern Madagascar—it can only be reliably distinguished from E. inunguis based on osteological characters, though it does tend to have more scales on the dorsum and along the lip than that species; the revalidated E. boettgeri, which is the most wide-spread species, and is found along the whole length of the east coast of Madagascar, and on Mauritius, has a unique rostral and nasal scale configuriation; and E. inunguis itself, as re-defined, which is confined only to the Sambirano region in western north Madagascar is, as I’ve already said, very similar to E. safari, but has fewer scales along the upper lip and down the back.

It is likely, in my opinion, that more species will still be to come out of Ebenavia. In particular, at least the lineage from Mananara that is the most basally diverged of the specimens assigned to E. boettgeri, may in future warrant recognition as a separate species, but at present we don’t have enough specimens to assess whether or not it differs morphologically from that species, and so we have erred on the side of caution and considered it a deep conspecific lineage of E. boettgeri.

With the taxonomy of the genus revised, new questions open themselves. What is the conservation status of each of the species? Some few specimens of Ebenavia exist in the pet trade, and it is not clear which species these represent, or whence they hail. If you are a keeper and/or breeder of Ebenavia, please get in touch with me, or at least take a look at the key toward the end of our new paper, and see if you can figure out which species you have. This will be important going forward, so that the blood lines in the trade can be sorted out, and we can ensure that people are not accidentally producing hybrids. Then there is the question of how these geckos, which resemble one another so strongly, and in a few places apparently co-occur, distinguish one another. Ebenavia are also highly vocal animals, and will chatter amongst themselves; the significance and role of this communication is, to my knowledge, totally unstudied. As in so many of the species from Madagascar, there is a great deal more about these animals that we don’t know, than what we do. We are only just starting to scratch the surface.

This new paper is also open access, and you can read it here or get the pdf here.