Skip to content
Home » Blog » About me » Wrapping up my PhD

The culmination of three and a half years is finally here. Tomorrow as I write this, the 21st of March, 2019, I will submit my PhD thesis, entitled ‘On the value of systematics for the study of evolution: insights from the reptiles and amphibians of Madagascar’*. It has been a long road and I am relieved that it is almost over. 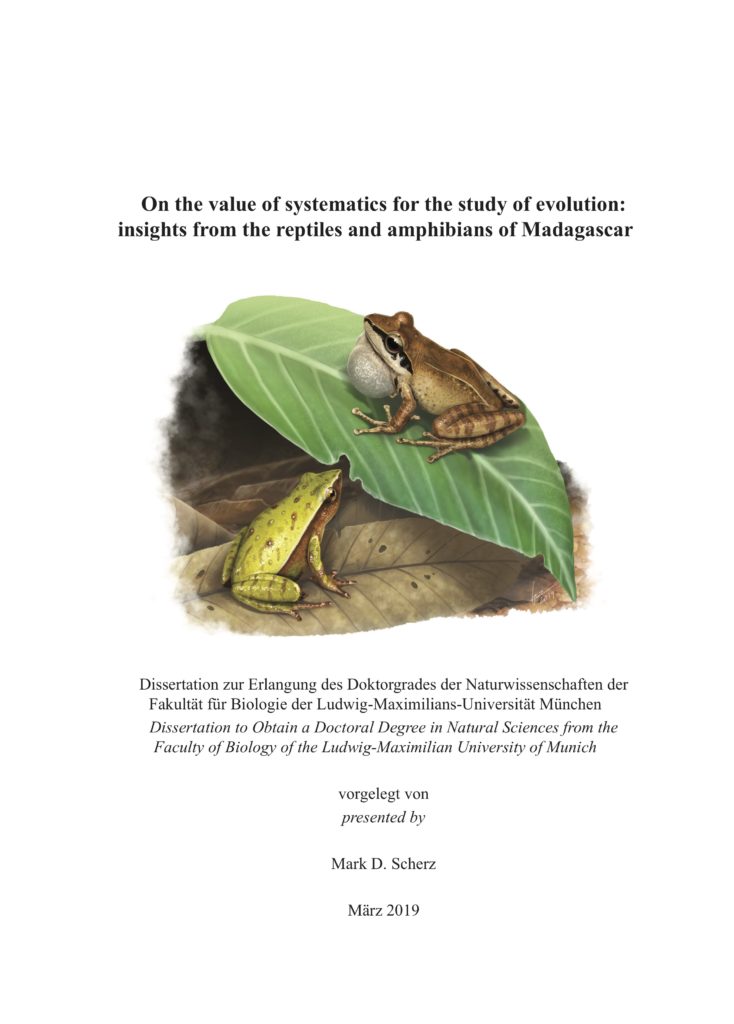 The cover of my thesis. Artwork by the insanely talented Gabriel Ugueto, who happens to also be a co-host of my podcast, SquaMates. The frogs are Plethodontohyla guentheri and Gephyromantis saturnini.

In the second half of last year, I came to two realisations. Firstly, I realised that I was almost done and that I would soon have to start getting to work on writing up my thesis. Secondly, I was not actually sure what that thesis was. With this second realisation came fear.

You see, the issue was that I had been pottering through my PhD delighting in getting to study precisely what I wanted to be studying. I had been content in my day-to-day crisis management work strategy, wherein I decided more or less every morning which fires were most in need of putting out. Shortly after returning from Madagascar in February, my partner Ella had sat me down, and together we had created a Gantt chart of the projects I had going on in order to manage them effectively and see how much I needed to put on pause. We had not, however, given heed to precisely what I would be including in my thesis, and how it might be structured. At that time, after all, it seemed a long way off, and there were quite enough fires to be getting on with.

Fast forward then to Ella and me sitting in Malta in October of last year. Three years after starting my PhD, I had a lot of publications to show for it, but I was not sure how they all fit together. In my eagerness to potter away, and in the vastness of the scale of taxonomic work needed in Madagascar, I had not really given much thought to the big question I was chasing. This was very bad planning on my part—a lesson learned.

So we opened up my publication list and looked through it. One thing was immediately obvious: while I had originally hoped to make my thesis all about evolution in a specific way, almost all of the papers I could include in it were taxonomic in nature. There were two bigger papers that were more evolutionary in scope, but neither of them was (or is) yet published. Clearly, my thesis would need to be focussed on systematics and not evolution. I decided that I would want to include only papers on which I had been the first author. I had the rare luxury of choice because we publish so very much, but I also wanted to do this because the papers followed some general themes with which I was most intimately familiar.

Starting with a list of those papers, I organised them a few different ways: by higher taxon, by central subject… in the end, I settled on an arrangement into three sections. The first is a series of papers on the genus Gephyromantis, which are united by a common discussion of biogeography. The second, a series on the subfamily Cophylinae, united by their discussion of osteology, phylogeny, and ecomorphological evolution. And the third, a chapter on chameleon ornamentation, which is still in preparation but which was certain from the outset to go into my thesis. All-told, these would constitute ten chapters.

How to connect all three of these themes and different focal taxa? I elected to go for an angle on systematics, demonstrating that there is a lot more to taxonomy than simple species description. This is something that is seldom appreciated, but I had a nice series of papers to place strong emphasis on it, from single species descriptions that are just a tiny piece in the puzzle, to a big ‘meta’-study that showed how the puzzle pieces could be used together. I also placed emphasis on the fact that Madagascar is a massive island, bridging the gap between the island archipelago and continental scenarios for the study of evolution. Some months later, a fourth section was added, on Mantidactylus frogs and conservation based on another unpublished manuscript that we submitted in January. It fit nicely into the story, showing the value of systematics in another light.

From a very young age, I knew that I wanted to get a PhD. I’m given to understand that that is a bit… odd, but my father, himself possessing a PhD in Synthetic-Medicinal Chemistry, somehow instilled in me the drive to get a doctorate of my own. I would guess, although with little certainty, that my desire to get a PhD (without fully understanding the concept of what that entailed) even pre-dates my drive to study the herpetofauna of Madagascar, and I know that this latter drive began between the ages of eight and ten. Finishing my doctorate in that subject is thus the completion of two of my major life goals.

Just over one page of my thesis is devoted to acknowledgements, but it is not really enough. I have had so much good fortune in my friends and colleagues, and I can honestly say that my PhD journey has been a joy. As I think will be evident from what I have written, Ella has been instrumental in keeping me on the right track. I am pleased (and not surprised) to say that she is showing none of my failings when it comes to writing up her own thesis—although she will be submitting it only at the start of next year, she has already written her entire introduction! I owe so much to her, and my family, for getting me through to this point.

Where will I go next? You’ll have to keep following me here and especially on twitter to find out!

*Honestly, I’m as disappointed with the title as you are, but it turns out it is very difficult to bundle three and a half years of work into a catchy by-line. So I went with a classic formulation that recalls archaic ‘On…’ titles (e.g. ‘On the Origin of Species by Means of Natural Selection’ by Charlie D, or ‘On Fairy Stories’ by JR2T).

2 thoughts on “Wrapping up my PhD”