Today, the 4th of February 2020, we have published a paper resolving the soft-nosed Malagasy chameleons of the Calumma nasutum species complex in the Open Access journal Vertebrate Zoology. In the paper, led by Dr David Pröztel, we clarify the identity of old names in this species complex, and describe three new species as well. You can get the paper here.

Madagascar’s soft-nosed chameleons in the genus Calumma are quite commonly encountered throughout the island’s rainforests. My colleagues and I are frequently sent photos by enthusiastic tourists and wildlife lovers who have taken photos of these little chameleons in the wild, and want to be sure that they have identified them correctly. Until now, we have often had to disappoint them: ‘Well, it’s a member of the C. nasutum species complex you see, so getting a species identification is not really possible at the moment…’ Now, finally, we can change our answer.

Calumma uetzi was one of the species we described from the C. boettgeri species complex in 2018. Photo by Frank Glaw.

Over the last few years, we have been building up to this paper. The matrix of morphological characters behind it took its first form back in 2015, when David started his PhD work on this group of chameleons. He started by addressing the C. boettgeri species complex, which are similar to the C. nasutum complex but have flaps of skin behind the skull called occipital lobes, and we published a number of descriptions of new species from this complex (read about three of them here), some of which were truly spectacular-looking. With that done, we could finally turn our attention toward the C. nasutum complex.

Here, as had been the case in the C. boettgeri complex, there were challenges to overcome. Firstly, there were three old names in the complex (C. nasutum, C. fallax, and C. radamanus, the latter having been a synonym of C. nasutum) that had to be clarified by examining their type material and assigning it to specimens from a known genetic lineage, but the condition of the old type material was often poor, and, more challenging still, there were at least six genetic clades to which these names could be applied. Secondly, although we had more material to work with than for the other species, there were still significant gaps in our sampling, with either only very few specimens available, or only specimens of one sex or the other. 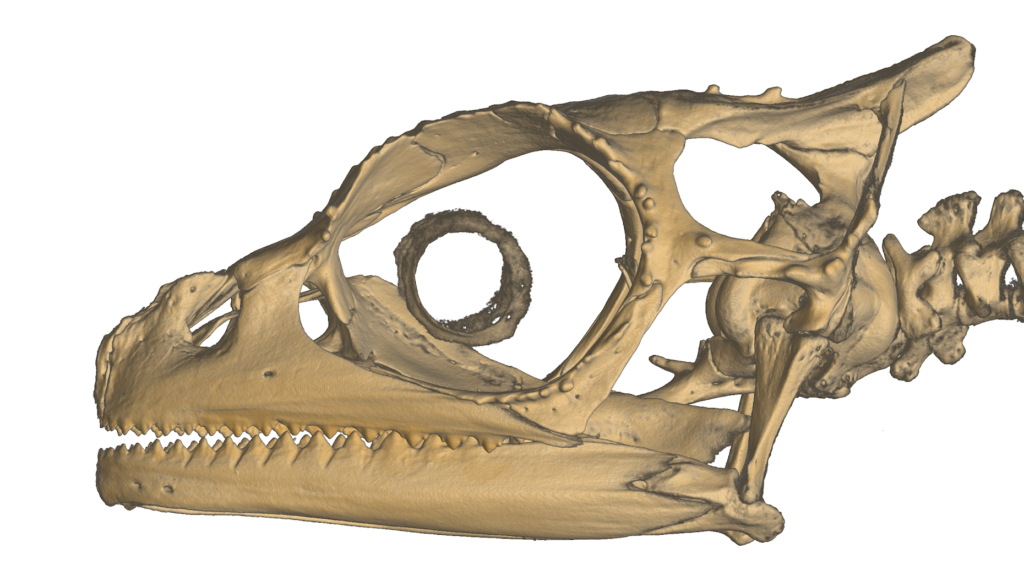 A micro-CT scan of the skull of Calumma nasutum

David dedicated himself to this challenge. A particularly important component came from both external and internal morphological comparison of the types to recently collected material. The internal morphology dataset came from micro-CT scans, and turned out to be quite informative for taxonomic purposes in this group (as we had established in our work on the C. boettgeri complex). Fortunately, features of the chameleons that are visible (or palpable) in life are enough to identify the species, but we did find additional skeletal characters to back up our conclusions.

So, what is the outcome? Well, it will come as a major surprise to many that the main species that we have, until this point, generally been calling C. nasutum is now to be called C. radamanus. This species, stretching across most of central and eastern Madagascar but also across the north of the island, typically has only a short rostral appendage (nose flap), although populations we call ‘cf. radamanus‘ from Marojejy (shown above) and Nosy Be (shown below) do have longer appendages. Calumma nasutum itself is now restricted to just two populations, one in the area of Andasibe and the other in Sorata in northern Madagascar, and has a rather distinctively elevated casque (the domed part of the back of the head) and cone-shaped dorsal spines, when present.

Getting to that revelation required a lot sleuthing—the assignment of C. radamanus was immediately clear by its collection locality and morphology, but the identity of C. nasutum was more ambiguous, because the collection locality is not known and the morphology is also somewhat intermediate between clades. We wanted to be certain, and take a genomic approach to clearing the situation up, but sadly our attempts to get DNA sequenced from the type material of C. nasutum failed. Still, we are confident that we have arrived at a reasonable solution. 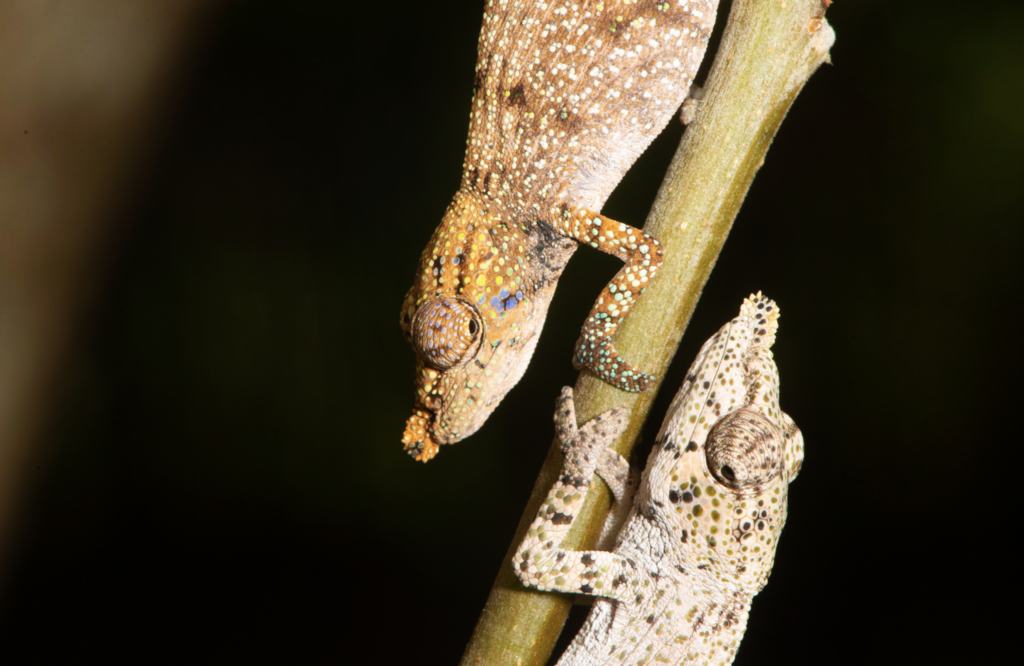 Two female Calumma cf. radamanus confronting one another with a stunning display of colour change on Nosy Be in April 2019.

Calumma fallax, which until now has often been considered the most likely to be confused with C. nasutum, boasts a rather large hole in the centre of the roof of its skull, just like we found in other species (here), making it quite clearly identifiable, and it also usually has a serrated upper margin to its lip scales (I was surprised to learn that I have never managed to take a picture of this species myself).

And then there are the new species. These are: 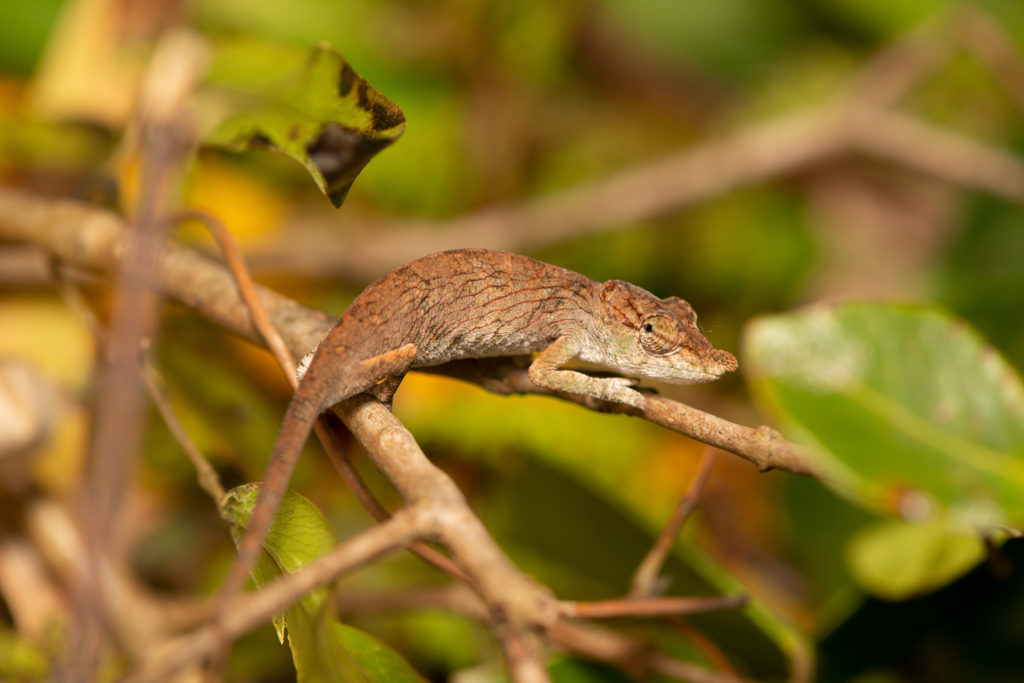 Calumma emelinae from central eastern Madagascar—an unassuming, generally brownish species with a low casque. Males can have quite strong green colouration on the head, and spines along the back.

Calumma ratnasariae from the Bealanana district in northern Madagascar—a generally greyish to brownish chameleon that can boast gorgeous pastel rainbow colouration in displaying males (I collected the holotype of this species on Expedition Angano in 2015–2016). They are least likely to have been seen by tourists by virtue of their distribution, and the fact that they are usually found quite high up in trees.

Calumma tjiasmantoi from the south central east of Madagascar, an often greyish to brownish chameleon that can turn incredible shades of orange and blue in fired-up males—of course, I have only ever managed to take this one terrible phone photo of one. These chameleons are mostly seen in Ranomafana, but are found all the way down to Andohahela toward the southeastern tip of Madagascar.

It will be a long time before the taxonomic changes trickle down to conservation policy, but the consequence is really huge: suddenly, C. nasutum is known from only a tiny, fragmented distribution, and C. radamanus is not yet assessed at all, not to mention the undescribed species. This is often a consequence of such taxonomic reassessments, and makes it that much more important that taxonomists work alongside conservation biologists and policy makers to put taxonomic change into conservation practice (more on which here).

It is a relief to see the taxonomy of this group finally ‘resolved’. I use scare quotes because unfortunately, C. radamanus itself is now a species complex, with several different major lineages needing careful examination, because of substantial morphological differences despite small genetic differences. There are also a few populations, such as the one on Montagne d’Ambre in northern Madagascar, that still need to be studied genetically.

The C. nasutum group has been one of the big black boxes in chameleon taxonomy in Madagascar. There are still several that need to be worked on though: the C. gallus group (‘Pinnochio chameleons’), with their ridiculous rostral appendages, may harbour numerous undescribed species, but sampling is too poor to describe them. The C. brevicorne group (elephant-ear chameleons) is a nightmare, with several old names, often sympatric but generally very widespread species, and lots of variability within species. And then, of course, we somehow need to wrap our minds around the fact that most of these groups, while apparently composed of similar animals, do not seem to actually be clades of closely related, morphologically similar species, but instead are somehow interdigitated, with small species spread among the large species, for which there are no current explanations. Suffice to say, there is still a great deal more to study about the systematics of some of Madagascar’s most emblematic animals, and you can expect more on this topic in the future!

One thought on “Madagascar’s soft-nosed chameleons get a makeover”