Continuing our work on the small arboreal chameleons of the Calumma nasutum species group, today my colleagues and I have published a new paper in which we describe three new species from the C. guibei complex. These new chameleon species are marvellously different, with one having a rainbow of colour, another having a spear-like rostral appendage (coming out of its nose-region), and a third species from which, despite intensive search efforts, we have only been able to find female individuals. Regrettably, all three new species are already threatened with extinction. The study is published in the Zoological Journal of the Linnean Society, and you can request the PDF here. 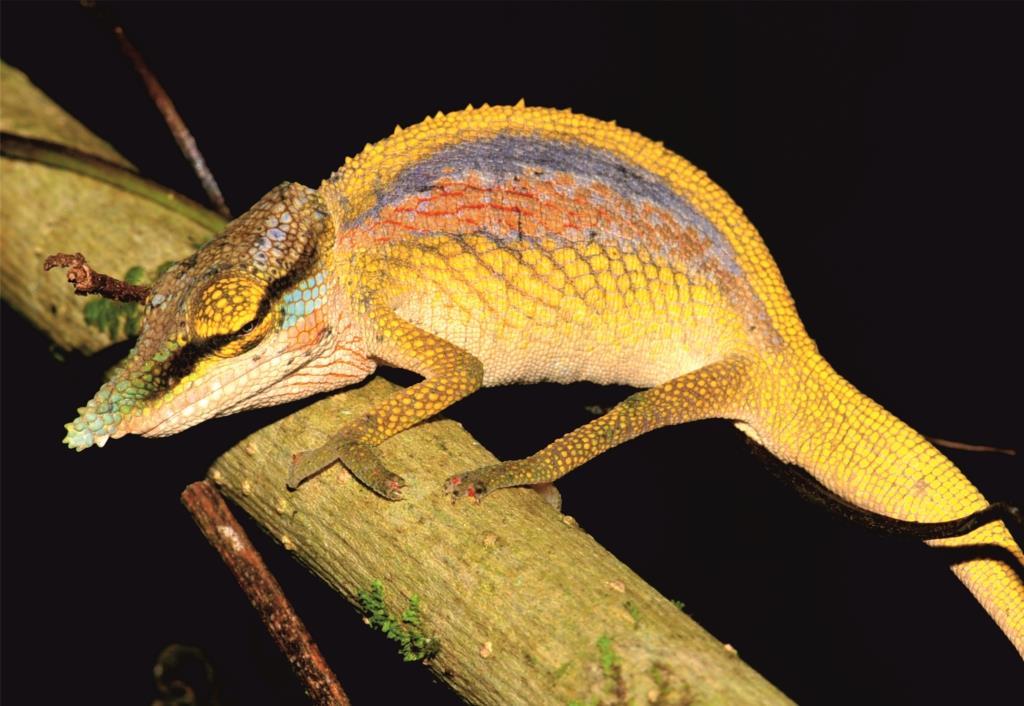 Calumma uetzi, one of the most strikingly-coloured chameleons from Madagascar. Photo by Frank Glaw 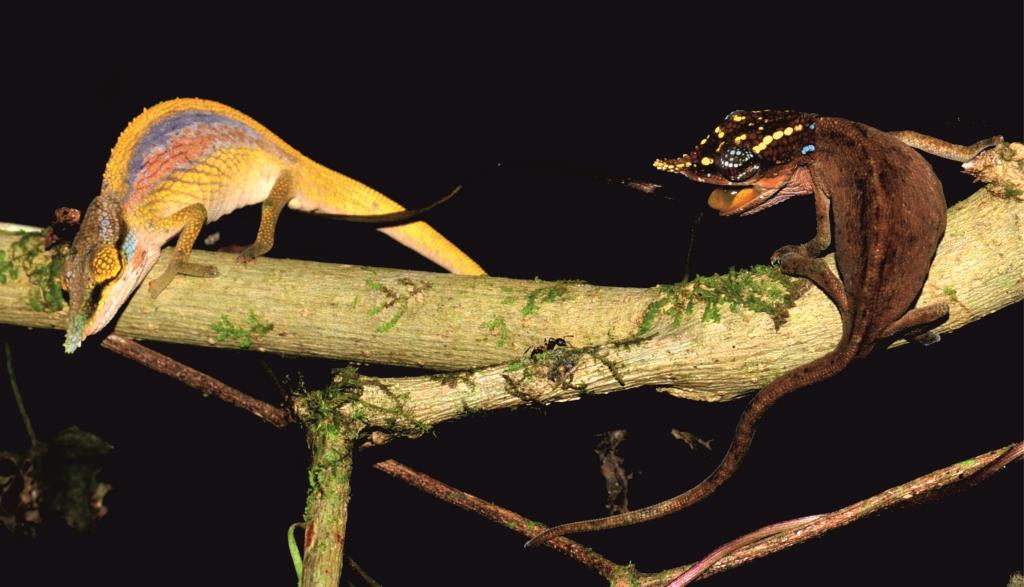 The male’s advances are not appreciated by the female. An open mouth in a chameleon is a clear aggressive signal. Photo by Frank Glaw.

The new species C. uetzi, is one of the most beautiful of Madagascar’s chameleons. Displaying males go bright yellow along their sides with stripes of pink and purple, with a variety of colours on the head from teal to aquamarine, yellow, salmon, and purple, with a black stripe running through the eye. Meanwhile, the female can turn a dark brown, almost black, with bright yellow spots on her head that convey her vexation with his attentions. This species was discovered in Sorata, and joins the ranks of new species described from this poorly studied area of forest in nothern Madagascar—other examples of species we have recently described from Sorata include Rhombophryne longicrus, R. diadema, Stumpffia sorata, S. miovaova, and Gephyromantis lomorina, but more species from this area are still in or awaiting description. A further specimen of the species was later found in Marojejy (conforming to biogeographic patterns I have written about recently), but basically nothing is known of the population there. The forests of Sorata are under really intense anthorpogenic pressure, so we recommended this species be considered Endangered. We dedicated this species to Peter Uetz, who selflessly maintains the Reptile Database almost single-handedly! 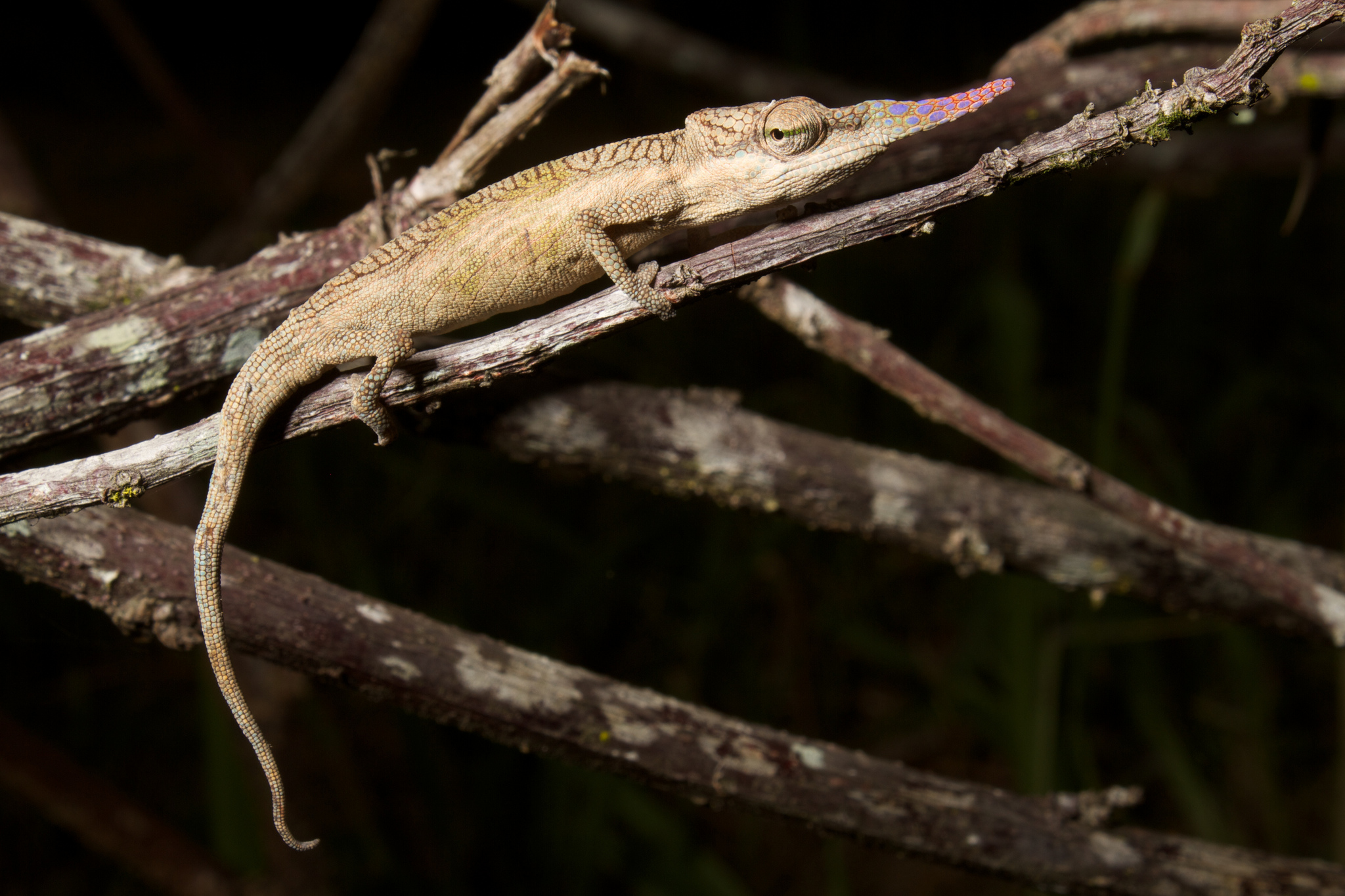 Calumma gallus has the weirdest nose of all of Madagascar’s chameleon. Photo by Brian Gratwicke, CC BY 2.0

As happens really all too often, only one specimen of the new species C. lefona has ever been found, and it was necessary to describe the species without any other material. This species sets itself apart in two ways: firstly, it has an exceptionally long, spear-shaped flap of skin at the front end of its head, known as the ‘rostral appendage’. Having a nose like this is the feature that unites all members of the C. nasutum species group (though some species have apparently lost it again), but that of C. lefona is exceptionally large, and recognisable by its unique shape. It is somewhat reminiscent of the nose of the bizarre C. gallus (see right), but is much less pointed and probably not as brightly coloured.

The second way this species sets itself apart is that it has a large hole in the top of its skull. This ‘fenestra,’ formed at the contact between the parietal and frontal bones, has already been reported from a few other species, especially C. guibei in our recent study on that species, but in no other species is it as large as in C. lefona. By micro-CT scanning the skull of several chameleons, we found that this fenestra is actually widespread in chameleons. Using a method called DiceCT, we stained the soft tissue of a specimen and looked into the relationship between the hole and the tissue around it. Perhaps unsurprisingly, the frontal lobes of the brain sit directly beneath this hole. So what is it doing? Well, we think it might be related to the pineal organ, which has a role in biological clocks, and is present in some reptiles as a ‘third eye,’ in some species even with a lens and an obvious retinal field. In chameleons, the third eye is practically unstudied, and we are not certain that the large holes we are finding are homologous with that structure, but the amount of brain that sits directly below it would suggest something of that kind. Interestingly, from our survey across the genus Calumma, we found that the size of the hole correlates with the elevational distribution of the species—higher elevation, larger hole—leading us to suspect it may have a biological significance, e.g. in helping the animals thermoregulate in colder climes. At the moment our data are too fragmented to make conclusions on this front, but it is an interesting topic. 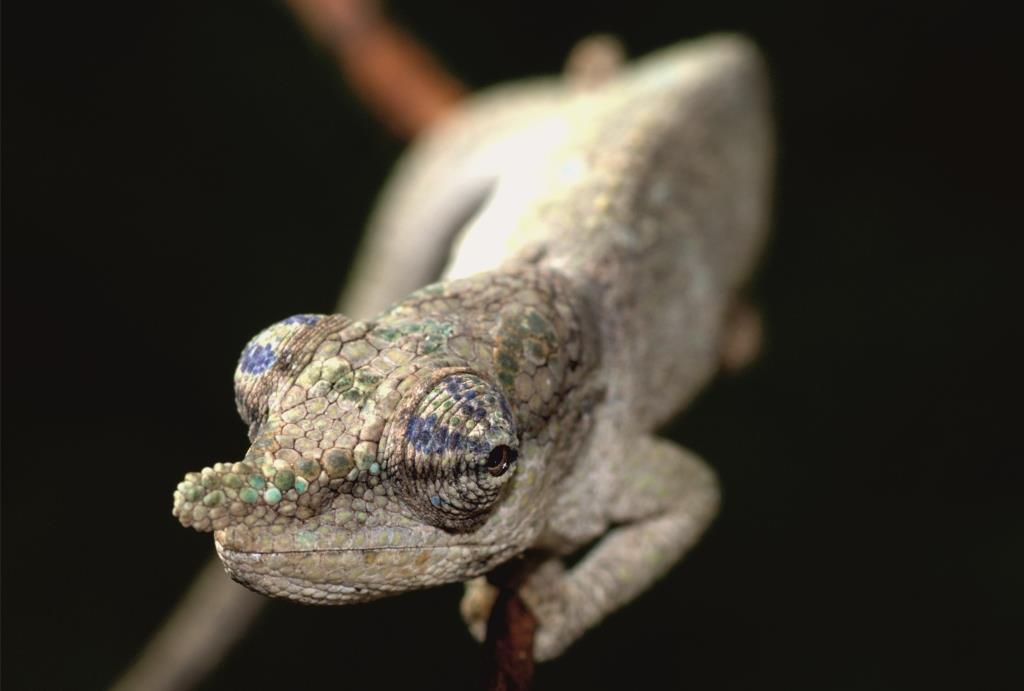 The third species we have described in this paper is a real curiosity. It is not much to look at, being largely drab brown with faint blue patterns on the head, but it is an important discovery. Although it very strongly resembles other members of this species complex, especially C. boettgeri, the new species was discovered far from any of its relatives, in a tiny, isolated forest fragment outside the town of Moramanga, east of Antananarivo. The forest is mere metres from one of Madagascar’s most travelled roads, has an area of ca. 15 ha, and is already disappearing, but it is the only known location where C. juliae can be found. As such, the species is undoubtedly critically endangered.

As it is so easy to access, our team has repeatedly visited this tiny fragment of forest. Despite intense efforts over several trips, we have only managed to find 12 individuals of this species, and every one of them was female. This problem is remarkably widespread in chameleons, and several species have been known only from females for long periods before a single male was ever found, so we have reason to suspect that the males simply are doing a good job of hiding from us. Nevertheless, it raises the question of why chameleons so often occur in such dramatically single-sex dominated populations, and what that means for the males’ individual reproductive success. In the case of this critically endangered chameleon, it probably also has implications for the conservation of the species—assuming any males are present, the functional population size of these chameleons is almost certainly lower than might be expected based on female population density.

How to manage this problem? Well, the first course of action that we recommend is the immediate protection of the tiny forest in which the species occurs. Then, nearby, less accessible areas of forest need to be searched for the species, and at the same time, we must continue searching for males in the one fragment they are known from. After that, we will see if this species needs to be actively managed, or if habitat conservation can be enough. But before any of this can happen, the protection of the forest needs to be acted upon. We are hopeful that this can be implemented as soon as possible, before the forest is completely burned down, but in this kind of situation it is almost never possible to be sure. Time will tell.

The new species was dedicated by David to his partner Juli, who helped to discover the species and find additional specimens.

With these three new species described, the Calumma guibei species complex is almost resolved—only very few problems remain. The resolution of this complex has been a lot of work, but is an important stepping stone toward better understanding of the C. nasutum species group as a whole, from which numerous additional undescribed species remain. The work on this group is still quite far from over.

To read about another species of small chameleon we described recently, you can click here.

Update 2018-04-24: Our chameleons have received a decent amount of press coverage, listed below:

One thought on “Marvels and mysteries: three threatened new chameleons from Madagascar”