We have just published the discovery of a new species of chameleon, Brookesia nana, which is a new contender for the smallest reptile—and therefore the smallest amniote vertebrate—in the world! Our new paper is published in the Open Access journal Scientific Reports. 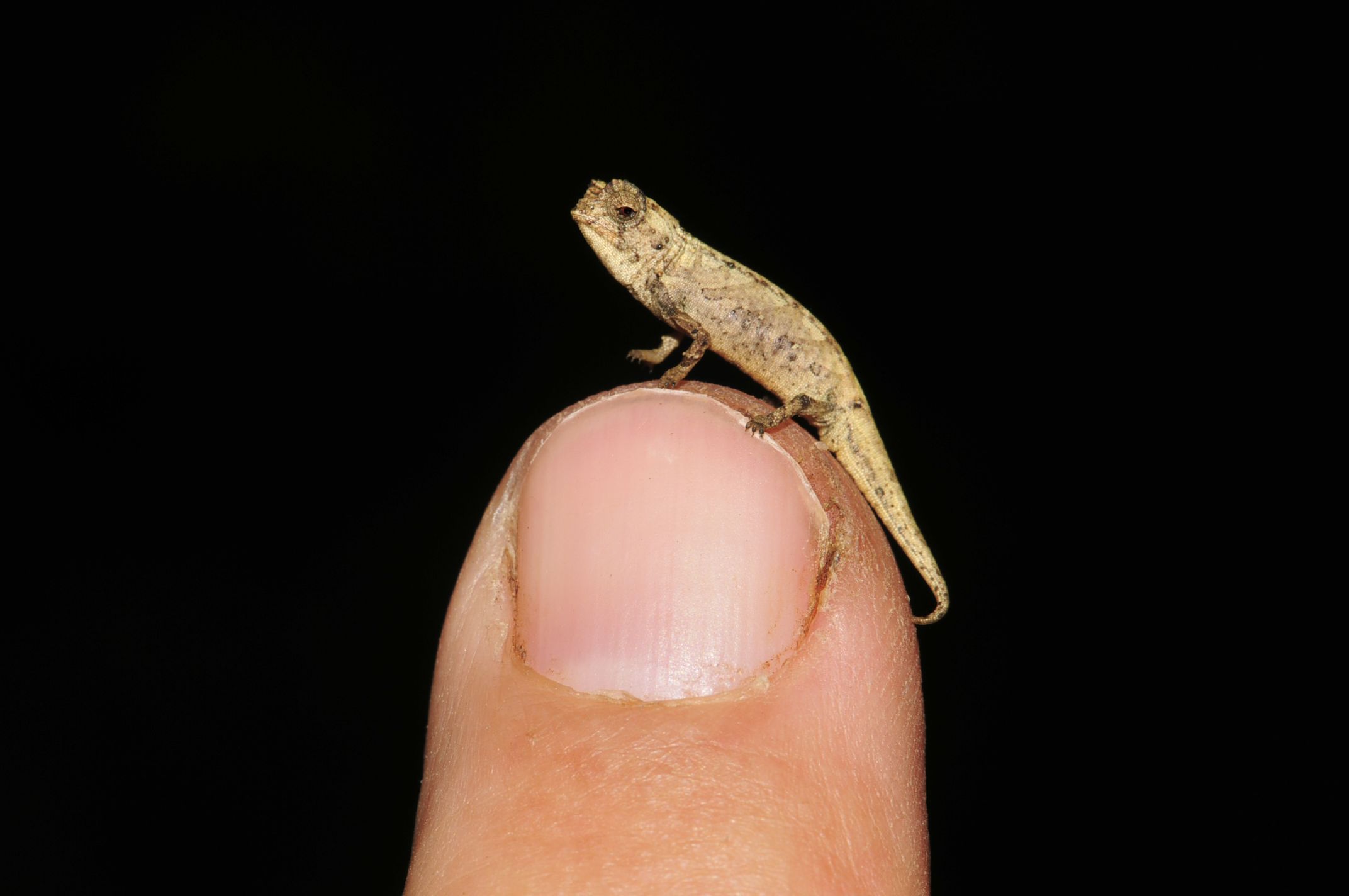 Nine years ago, my colleagues reported on a few new Brookesia species from northern Madagascar, the smallest of which, B. micra, was just 16 mm in body size (measured from snout to vent). This made it among the smallest amniotes (vertebrates with an amnion in the egg, so reptiles and mammals, not fish and amphibians) in the world, competing with some sphaerodactylid gecko species from the Caribbean, chiefly Sphaerodactylus ariasae at 16 mm in body size (but there are a few other Sphaerodactylus species of similar size). Interestingly, in both this tiny chameleon and the diminutive geckos, the species were only found on relatively small islands, suggesting a possible role for insular dwarfism leading to their size reduction.

At an adult male body size of 13.5 mm, Brookeisa nana males are the smallest adult reptiles of any sex, substantially smaller than B. micra and any Sphaerodactylus—a spectacular case of extreme miniaturisation. 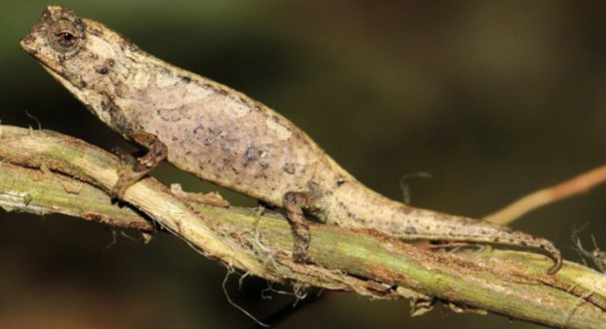 The holotype of Brookesia nana on a vine. Photo: Frank Glaw.

On the other hand, a female of Brookesia nana measured 19.2 mm, which is larger than the females of the competing Sphaerodactylus species. So, while adult males of the new species may be the smallest adult amniotes, adult females are not. Sexual size dimorphism is widespread in chameleons, including Brookesia. As a result, whether or not the new species is considered the smallest amniote in the world depends on whether we define that based on the male or female body size, or the midpoint of the two. It turns out this is quite a common problem in other species with size dimorphism as well, such as frogs.

Brookesia nana is found in the dwindling rainforests of the Sorata Massif in northern Madagascar. These forests are quite well connected (for the time being) with others across northern Madagascar, and so this tiny new chameleon violates the pattern of the smallest species being found on small islands. That suggests that something else is allowing/causing these chameleons to miniaturise. 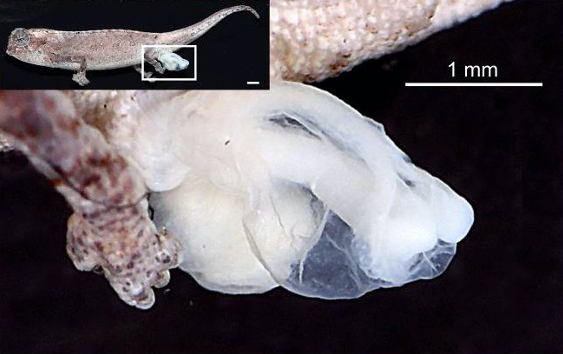 The hemipenes of Brookesia nana. Image from the paper.

In spite of its small size, the male holotype of B. nana has quite large genitalia. This prompted us to look at the relationship between genital and body size in chameleons, which revealed an interesting pattern: the smallest species often have the proportionally largest genital sizes. We think that this might also be related to size dimorphism: if the female remains larger than the male, a constraint is placed on the reduction of the male genital size.

This discovery helps shed a little more light on some of the physical constraints imposed on sexually reproducing vertebrates when they explore the minimum end of the body size spectrum. Similar constraints relating to the coupling of genitalia are known from spiders. What I find particularly interesting is that this kind of constraint doesn’t exist in miniaturised animals that don’t have intromittent reproductive organs, like frogs, where fertilisation is almost always external.

In frogs, we often see males and females of substantially different sizes, and miniaturisation can happen without constraint imposed by mechanical fit of this kind. Yet, at the same time, in many of the tiny species my colleagues and I have described, there is only limited size dimorphism. Why don’t we see diminishingly small male frogs and larger females, like we see, for example, in angler fishes? Well, ecology has a lot to do with it, but I also think that there is a kind of mechanical fit at play in most of the tiniest frogs: amplexus, the mating posture where the male grasps the female, gets difficult when the male is too small to get a good grip. Some frogs have solved this by males ‘gluing’ themselves to the females, but that is not known from miniature frogs. So maybe amplexus is making miniaturisation of frogs happen in a more coupled way between the sexes. There’s a lot more to find out about vertebrate miniaturisation!