Skip to content
Home » Blog » Science » Conservation » A new species of snake from the EU! (technically)

The herpetofauna of the EU is relatively well studied, and it is rare that species new to science are discovered. Today, my colleagues and I have described a new species of blindsnake from the island of Mayotte—an island that lies in the western Indian Ocean between Madagascar and Mozambique, but that is an overseas territory of France, and thus, technically part of the EU! We have dubbed the new species Madatyphlops eudelini, in honour of Rémy Eudeline, who found the two known specimens. The paper is published today in The Anatomical Record [pdf here]. 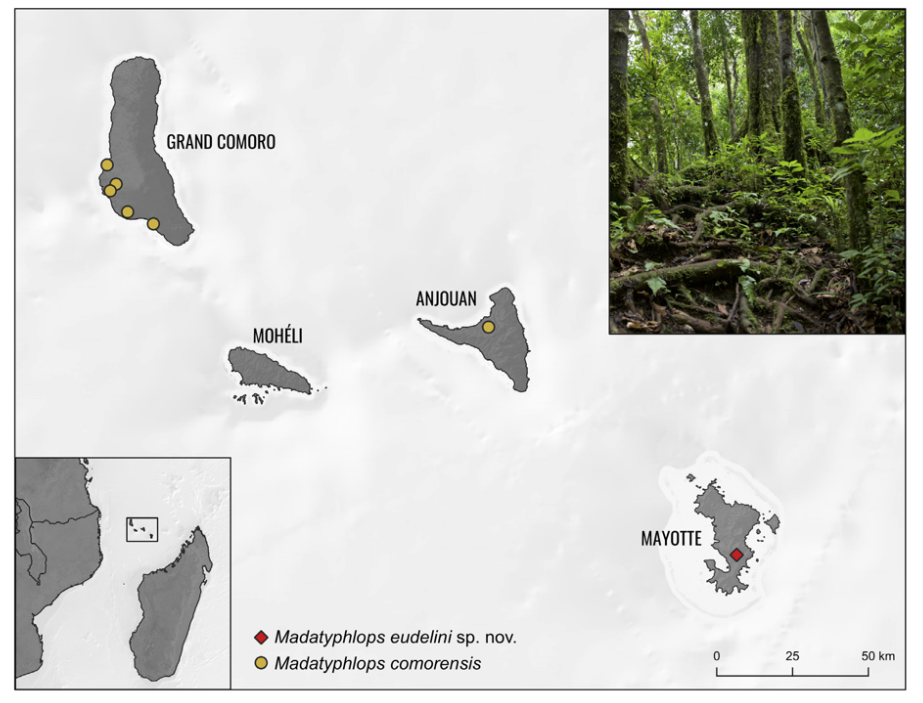 Figure 4 of our new paper, showing the distribution of the new species and Madatyphlops comorensis

Aside from this technicality, of course, Madatyphlops eudelini has nothing to do with European herpetofauna, but instead belongs to the fascinating island fauna of the Comoros Archipelago. This is a hot-spot volcanic island chain (like Hawai’i and the Galapagos) that hosts a diverse endemic fauna and flora with a mixture of Malagasy and mainland African flavours to it. The new snake species is no exception: the genus Madatyphlops is largely endemic to the island of Madagascar, with the exception of the previously known M. comorensis from the Comoros (a nation unto itself, composed of the other three major islands in this hotspot; geopolitics is complicated!). Madatyphlops eudelini adds a second species of Madatyphlops from this archipelago, and a third blindsnake species (Indotyphlops braminus, the world’s most widespread snake), is present as well, undoubtedly due to human introduction. 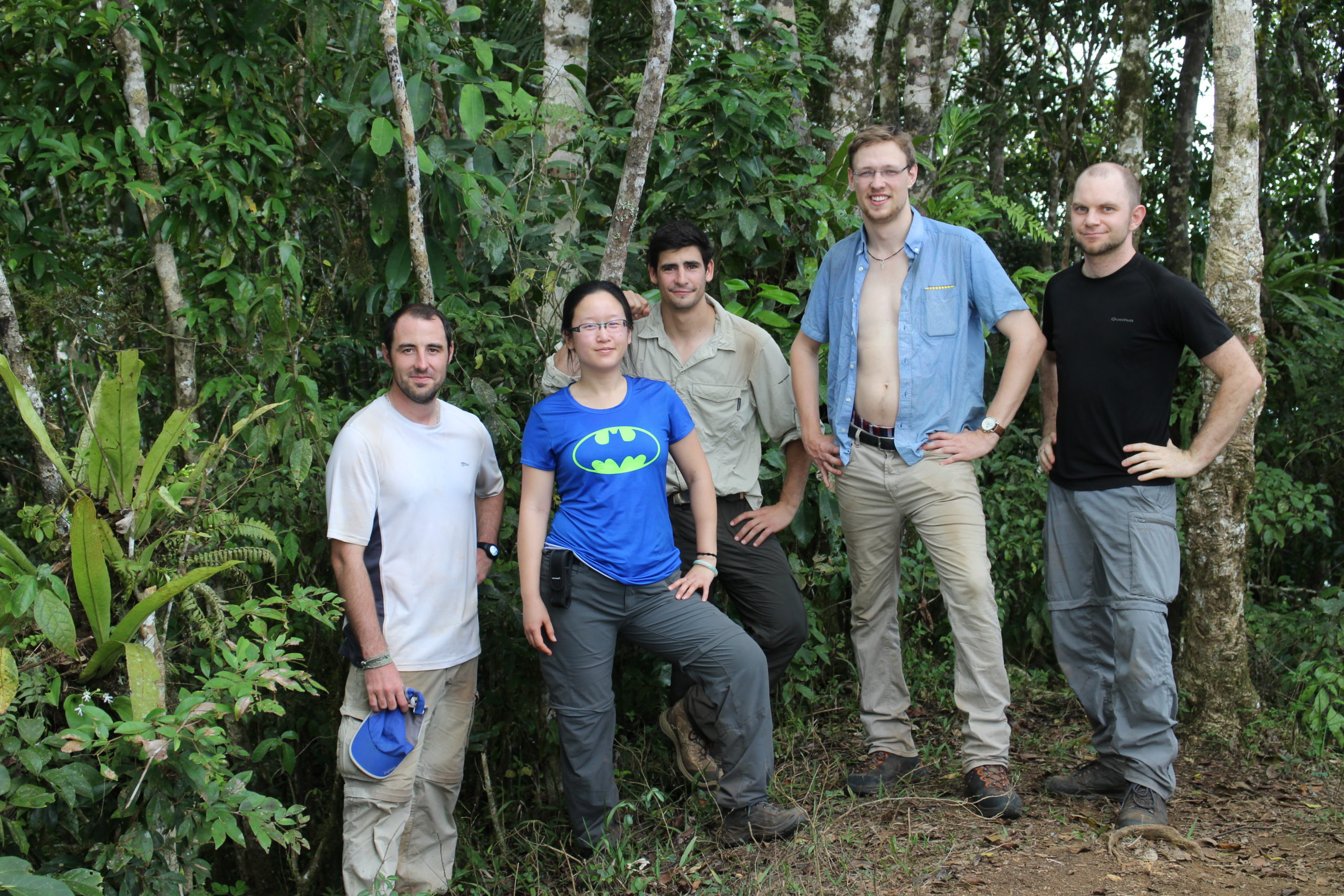 The team at the top of Mt. Benara, shortly after finding the second specimen of Madatyphlops eudelini. From left to right: Rémy Eudeline, Cynthia Wang-Claypool, Ludovic Montfort, myself (apologies for the open shirt!), and Oliver Hawlitschek.

Oliver Hawlitschek, lead author on the study, has been working on the Comoros Archipelago, and especially Mayotte, for years. Mayotte has a high peak, Mt. Benara, which has been frequently surveyed in Oliver’s work, but he had never come across a Madatyphlops there in dozens of surveys. Rémy Eudeline, a teacher and nature enthusiast, visited the mountain once in October 2014 and found a little blindsnake that looked decidedly different from the other species, apparently freshly dead on the path. He collected it, preserved it, and showed it to us when we visited the island a month later. We suspected then that it might be a new species, and set out to re-visit the mountain as part of our surveys and with the hope of finding another specimen. Rémy accompanied us, but this time it was Oliver who found a second specimen!

We examined the specimens and confirmed that they are quite different from every other species of blindsnake. They are clearly Madatyphlops species based on DNA, and differ from M. comorensis in a host of characters, not least of which are substantially larger body size, and white colouration along a stripe on the belly of the snake (M. comorensis is uniformly dark in colour). I micro-CT scanned both species, and we found a few subtle characters in the skull that also differ between the two (and provided the first detailed osteological description of any Madatyphlops species). And so we had confirmed that this is a new species. To recognise Rémy’s uncanny ability to find these snakes, we dedicated the species to him. 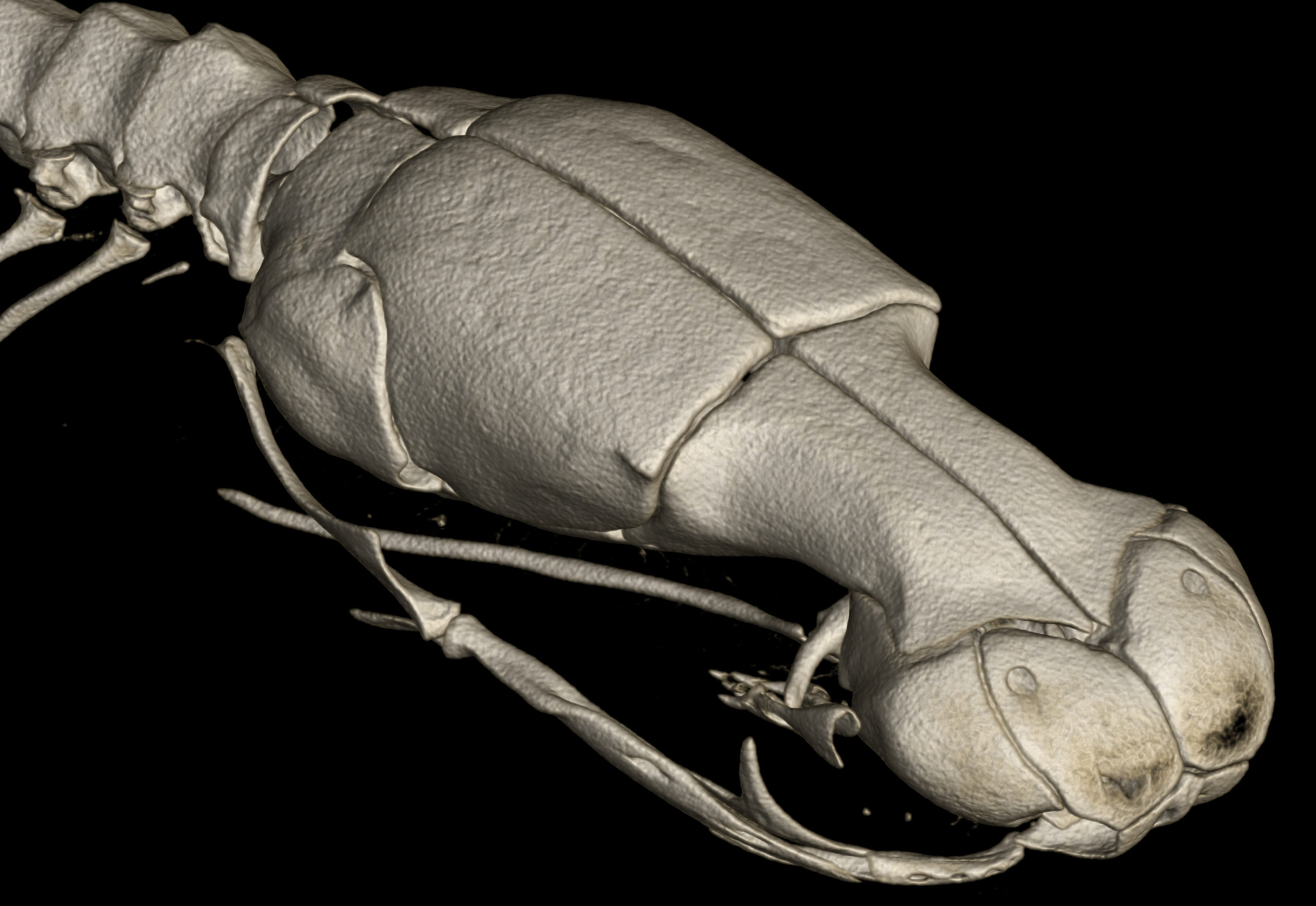 The skull of Madatyphlops eudelini. Typhlopid blindsnakes have truly bizarre skulls compared to other snakes, with very unique jaw mechanisms. They are super-specialised for subterranean life-style and gobbling up eusocial insects like termites and ants.

Madatyphlops eudelini is currently thought to be endemic to a tiny area of Mayotte. Just how tiny is that area? We estimate that the occurrence of this species, which has (based admittedly on a tiny sample size) only been found near the peak of Mt. Benara at ~585 m a.s.l., is probably limited to an area not larger than 20 km2. That’s an extremely small distribution range, putting the species at potential risk of extinction. However, we consider its habitat to be tolerably well protected, and therefore have suggested it instead be listed as Vulnerable, until and unless its habitats come under threat, at which point it could jump to Critically Endangered overnight.

In recent years, the work of Oliver Hawlitschek, Frank Glaw (senior author on this study), and other colleagues has increased our knowledge of the reptiles and amphibians of the Comoros Archipelago by leaps and bounds. They’ve described new species of geckos, snakes, and even frogs. Slowly completing the puzzle of the archipelago’s fauna is a key step towards understanding where it came from, how it got there, and what happened when it arrived. Volcanic archipelagos present wonderful systems to understand evolution in action, and the Comoros Archipelago is a prime example that has, so far, not been awarded nearly enough attention. I am excited to see what else it will yield in the coming years!

Finally, on a personal note, this is a milestone for me because it is not only the first species of snake I have gotten to help describe, but is also 80th species I have coauthored! It is such a privilege for me to get to work on these fascinating animals with such great colleagues. There is still so much more to come!