My team and I have been on Montagne d’Ambre in northern Madagascar since the eleventh of November. At this point we are roughly three fifths through the fieldwork, and two members of the team and I have come out of the field to Antsiranana, the largest city in northern Madagascar, to resupply and to pick up Ella, who will be arriving on the 23rd. This presents an excellent opportunity to provide a brief post on how the work is going, and what we have found so far.

As of today, we have 81 species of reptile and amphibian, the highest number collected on any expedition to this mountain; the only other expedition of note to similar altitudes by Raxworthy and Nussbaum (1994) collected 70 species. Our number is high in spite of the fact that we are missing a large number of taxa already known from the park, most of which are snakes. In part this can be explained by our work on the west slope of the mountain; as the first herpetologists ever to visit this area, it was a unique opportunity to investigate the biodiversity of its forests. It differs dramatically in climate from most of the rest of the park, resembling rather the lower altitude areas in the north of Montagne d’Ambre National Park, known as the Forêt d’Ambre, which were surveyed by D’Cruze et al. (2008). In the west we encountered numerous species found in that study, as well as several completely new for the park, increasing our species total by 20 species over just three days.

Among our 81 species are also several that are probably new to science, but I am not able to give more detail on this at present. Suffice to say that the taxonomic work on the herpetofauna of Montagne d’Ambre is still quite far from complete!

Another of our main objectives is a population genetic study of three chameleons (Calumma ambreense, C. linotum, and Brookesia tuberculata) and two frogs (Mantidactylus bellyi and M. ambreensis). This sampling is going excellently, thanks to the extremely hard work of two Master’s students Ricky and Onja, fellow PhD student Safidy, and our expert guide Angeluc.

We have now finished our work on the higher reaches of the mountain, and as of two days ago are working our way down and north, into the lower reaches of the Forêt d’Ambre dry forests, where we hope to find several of the species known from previous work that we are still missing (especially skinks and snakes), also tease out the altitudinal limits of our focal species, which are defined, as you might imagine, quite strongly by climate and thus, altitude.

Warnings from people with experience in Montagne d’Ambre, including members of our own team, about the number of leeches in the upper reaches of the mountain failed to convey just how serious a plague they are. In a single night, four people together had nearly 1000 leeches! Over subsequent days, we had fewer, but they were a constant presence during our time at high altitude. We found a work-around (alcohol-filled falcon tubes, in which we collected the leeches), but the annoyance of the bites that alert you to their presence does not go away. Fortunately, as we move lower, the leeches disappear!

Brookesia antakarana/ambreensis with a leech

As an aside, I just want to share briefly that I have had three papers published during the fieldwork: two new frog species, Gephyromantis tohatra and G. angano, and two Uroplatus species, U. fotsivava and U. kelirambo! See my Publications page for more details! Another important paper was recently accepted in Scientific Reports, and I look forward to sharing the details of that study in due course!

A further update will not be possible until the end of the fieldwork, so, from myself and the team, I wish you a Merry Christmas and a Happy New Year, and look forward to sharing more results in 2018! 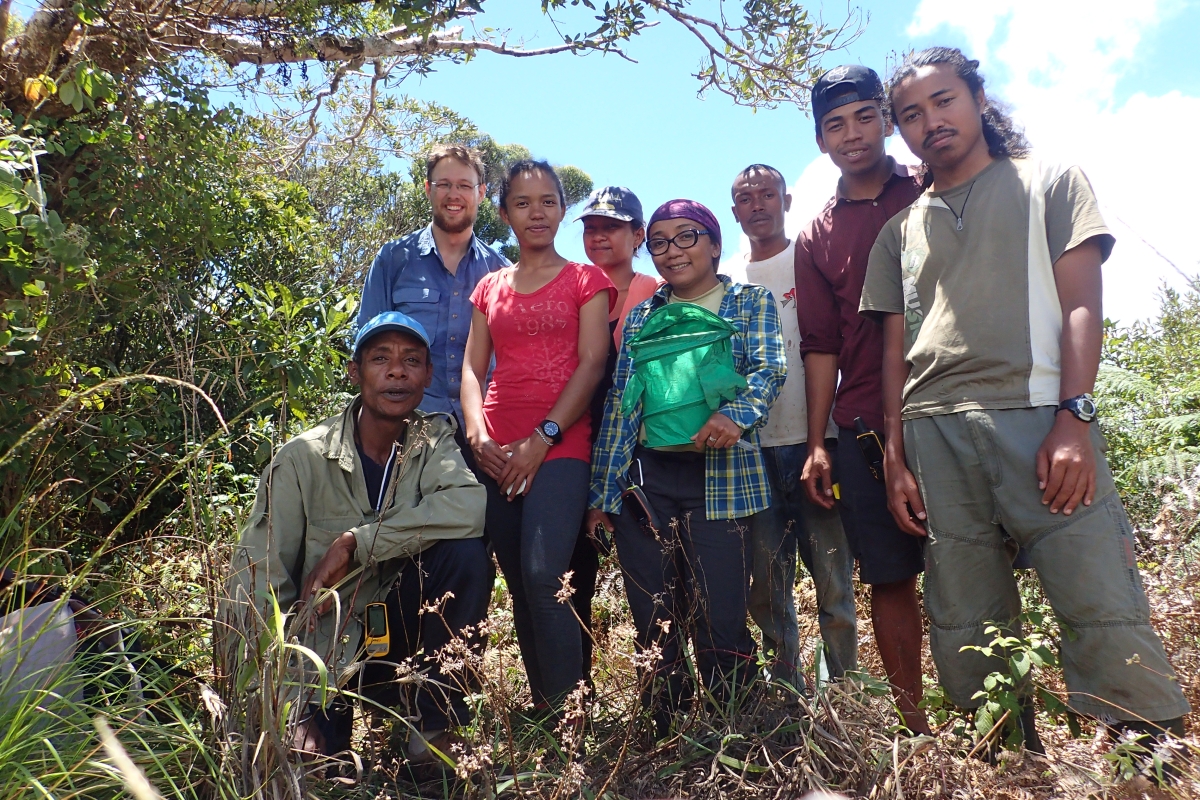 2 thoughts on “A mid-field update”