2020 is over at last. What a year. If you will indulge me, I will do as I always do, and look back on my year from an academic perspective. What a year it was.

Co-organisers of the Symposium on Microhylidae: right to left, Marta Vidal-Garcia, Angelica Crottini, and yours truly

My talk on the weird jaw mechanism of Xenotyphlops grandidieri

The delightful faces of Emma Sherratt and Philippe Kok

My fellow judges for the student talks

A dream come true: I got to visit Hobbiton

I more or less started off my 2020 on a plane to New Zealand, heading to the 9th World Congress of Herpetology in Dunedin. And what an incredible conference it was. With hardly a moment to get over jetlag, I sat through innumerable presentations, some of which were truly stunning (special shout-out to Ian Brennan for his truly beautiful talk on varanid lizard evolution, which my fellow judges and I deemed the best student talk of the meeting). I myself gave two talks, one on the weird skull of Xenotyphlops blind-snakes, and one on the microhylids of Madagascar in the Symposium on the Microhylidae that I co-organised with Marta Vidal-García, Angelica Crottini, and our absent colleagues Rafael de Sá and João Tonini. For me, though, the real delight in attending conferences comes from hanging out with like-minded people, and this conference was truly stellar on that front. I got to see and make so many dear friends, I can hardly wait for the next meeting, now just three years away, in Borneo. Also, I feel obliged to mention that the food at the WCH9 was truly incredible. The organisers did such a great job! I wrapped up my trip to New Zealand with a trip to Hobbiton and the Waitomo glow-worm caves, which was really delightful.

I returned from New Zealand to Konstanz in southern Germany where, in November 2019, I had started a new PostDoc in the Meyer lab, working on various projects related to cichlid fishes. It was only the middle of January, and so much was yet to happen. My partner, Ella, was still living in Munich, and moved to Konstanz (with the majority of our possessions, into a flat she had never seen) three days after my return. Two weeks later, I would submit a grant for a PostDoc project to the Deutsche Forschungsgemeinschaft (DFG) in the Taxon-OMICS priority programme, while Ella was on her way to Laos. Suffice it to say that January alone felt like enough events for a good quarter year, and there was hardly a whisper on the wind of anything called ‘COVID-19’.

And so it was that, at the start of February, I bent myself to my research in my new position. Because my projects from that time have not yet wrapped up, I cannot expound on them in any great detail here, but suffice it to say that my work for the rest of 2020 would provide me ample new and interesting challenges. 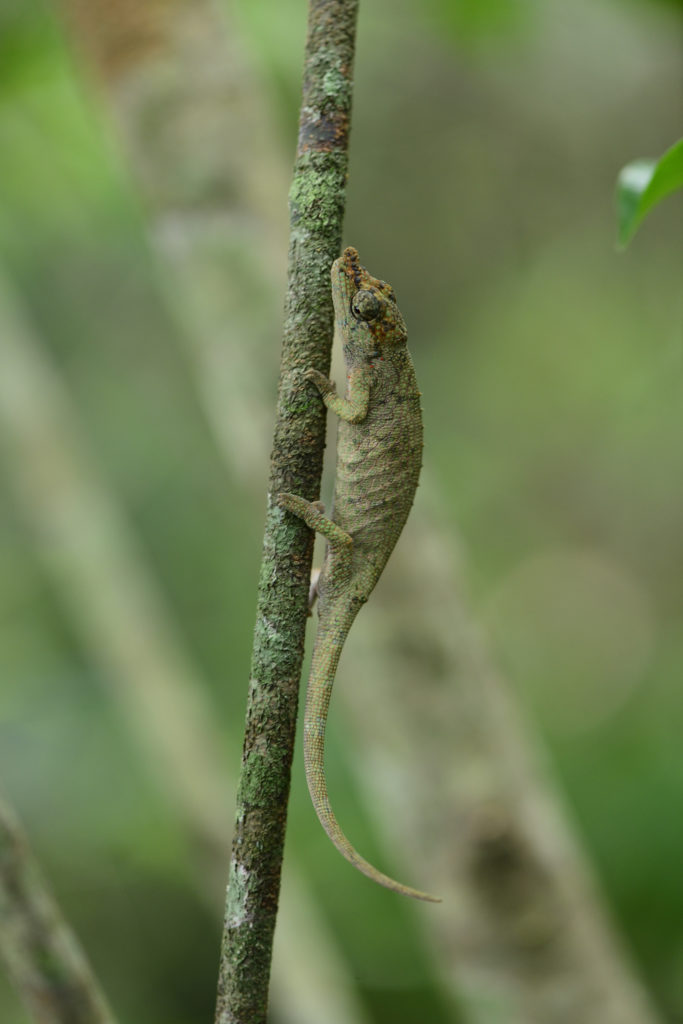 Calumma ratnasariae, one of the new species of chameleons we described in 2020.

Whilst all of my working energy was being devoted to these fish projects (more on which will undoubtedly come out throughout the year), outside of work hours various unfinished projects were being wrapped up. One of the projects I spent a lot of time on in 2019 was rejected several times, and eventually stalled for the rest of the year while I worked on other things. Hopefully it will be published in 2021. But I did manage to get ten papers out of the year anyway. The first of these was the publication of our review of the Calumma nasutum species complex, led by my former office-mate Dr David Prötzel, wherein we described three new chameleon species, revalidated another, and refined the circumscription of two more. This paper was long-anticipated, and it is a huge relief to say that the taxonomy of the group is now largely settled (though of course, other, related species complexes remain wholly unassailed as yet).

March rolled in, and with it… well, you know more or less how things went. On the 12th of March, I put myself into self-isolation after developing a mild cough, and more or less did not set foot in the university again until three months later. Fortunately, most of my projects were amenable to being carried out from home-office, and so work continued, although I cannot pretend that the change in circumstance was not a major blow to my productivity. With Ella back from her trip, we realised how small the flat was for the two of us to live in non-stop. The area that we had originally planned to be her working space (she was always planning to work from home) I wound up taking over for my work, leaving her at the kitchen table. If anything good can be said of this time, it is that we developed a great fondness for ping-pong, as we had a table visible from the bedroom window, and could go out during our lunch breaks and after work to play. This was hampered a bit when I got a hexenschuss (lumbago) from lifting a couch, and was stuck in bed for over a week.

From the end of March onwards, things became increasingly smeared in time. Ella defended her PhD over Zoom at the end of April, after a series of confusing delays and changes—a really exciting day that everyone was sorry could not take place in person in the Netherlands, where it would otherwise have been. She received highest honours, and listening to the laudation was a delight.

Over the next few months, my colleagues and I published several new species. The first was, Platypelis ranjomena, which had been in the works since the early 1990s. In June, we published another Platypelis species, P. laetus, led by Dr Andolalao Rakotoarison; and I had my first single-author paper, wherein I took great pleasure in dedicating the new species Rhombophryne ellae to Ella. In December, we published two new Uroplatus leaf-tailed geckos, U. fetsy and U. fangorn. This was my first time as senior author on a Uroplatus description, and I was glad that my coauthors agreed with my suggestion of fangorn as a fitting species epithet for these little tree-spirit-like geckos.

I was fortunate to be able to get out two methods-related papers in 2020, bundled together with species descriptions; first, in July, we published the description of Mantidactylus radaka, wherein we established a new method for targeted enrichment from a library of barcodes of known species and candidate species, allowing the clarification of the identity of historical types—we also refined the definitions of M. grandidieri and M. guttulatus. In a second paper in November, we applied the method again, this time coining the name ‘barcode fishing’ for it, and clarifying the identity of M. ambreensis and describing another species, M. ambony. 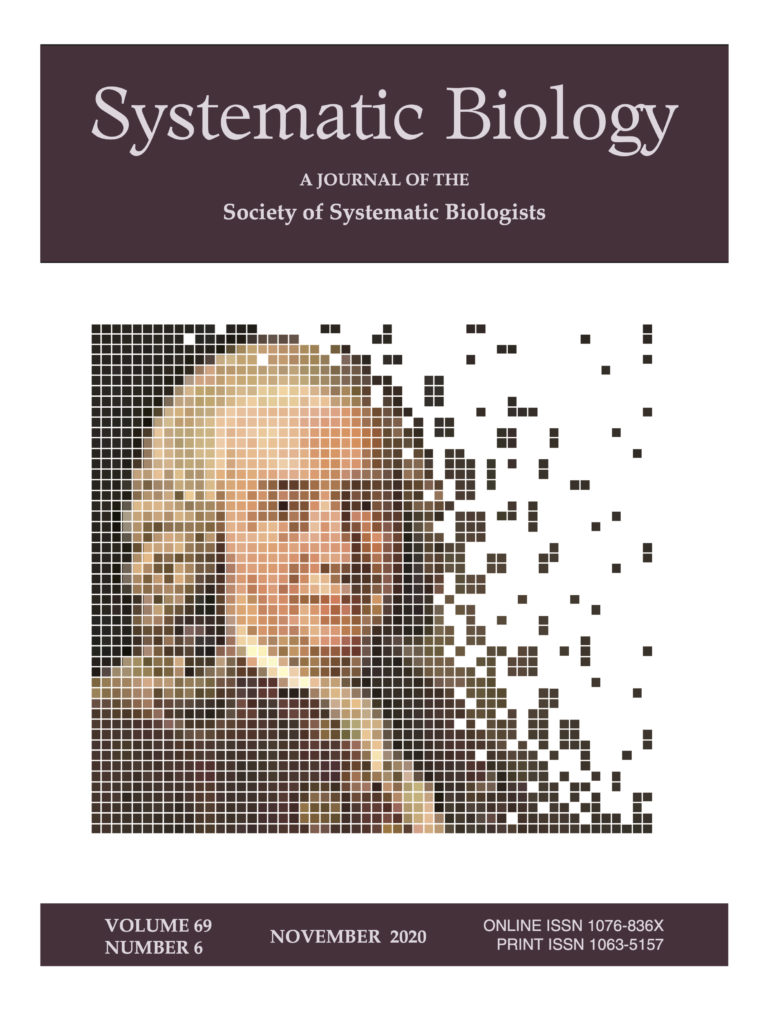 Perhaps the highlight of the year, publication-wise, was a massive team effort on taxonomic data deposition and repositories, led by Aurélien Miralles and Miguel Vences, which made the cover of Systematic Biology. I think this work will be a really important contribution to taxonomic data-deposition strategy development over the next years, and it was great to be a part of it.

I also spent some time in 2020 teaching: in May I TA’ed a course on Vertebrate Morphology at the TU Braunschweig, as I have in previous years, but this time via e-learning rather than in person (of course). I also gave a few lectures in a course in Konstanz, and a few also for the Amphibian Foundation’s Master Herpetologist course. On the whole, this was less teaching experience than I wanted to get in 2020, but… well, it was a weird year.

I ended 2020 with my publication bases loaded—five papers in proof, four more in review, and several more manuscripts nearing submission. These include taxonomic works, a natural history note, two papers resulting directly from the WCH9 meeting, and one very exciting discovery that will be published on the 11th of January at 10h UK time. Watch this space!

Somewhere in the midst of all this, I got a phone call giving me the unofficial confirmation that my DFG grant, submitted alllll the way back in January, was to be accepted, and then, some months later, the official confirmation! And so, less than a year after moving into our flat in Konstanz, Ella and I were faced again with a move, this time to Potsdam, outside Berlin, where I was to carry out the work in Michael Hofreiter’s Adaptive Genomics group.

And so things were set in motion, all under the oppressive atmosphere of the pandemic, for us to move across the country. Ella had to take the train up spontaneously to do flat viewings >800 km away, and then, once the decision was made, we had to rent a van to move our vivaria and arrange a separate moving truck for the rest of the move. This time it was my turn to move into an apartment that I had basically never seen before, but it was worth it. Our new flat is wonderful. It did, however, take almost a month to get internet set up, which was a setback to my plans to productively use the two months between the end of my contract in Konstanz and the start of my position in Potsdam. Ah well, I was indeed in need of a holiday!

While all this was going on, Ella and I did all the planning to get married, have a wedding celebration (ha!—looking back now, we were ludicrously optimistic), and even a honeymoon, cancel it all, get the go-ahead to have the actual official wedding, and get married with only a very small number of close family. Oh and I got my driver’s license, which also required no small effort.

All this, and basically no mention of the actual WORK I did this year! How many years was 2020, again?