We’re officially in the 2020s! It’s the time of year when I look back on the academic events of my last year! 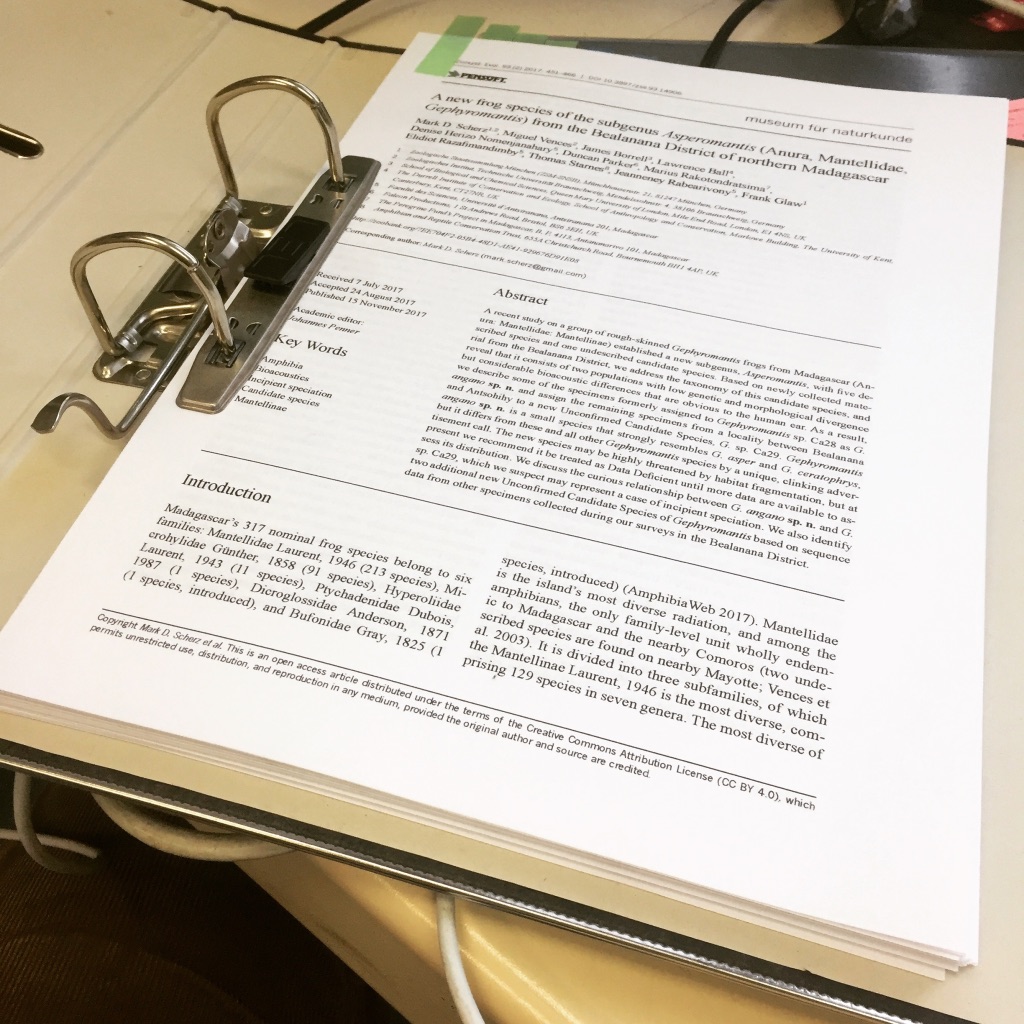 My 2019 started with fondue and raclette, surrounded by friends. But on the 2nd of January I was back at it already, working hard on what would take up the majority of my year: preparation of my PhD thesis. By January, I had chosen the chapters that would be included in the thesis, I had a skeleton of my introduction, but nothing else. Over the next few months, the thesis would grow to over 300 pages, with eleven chapters in three sections, not including the introduction and discussion.

The next day, I submitted a paper to Zoosystematics and Evolution describing a tiny Brookesia species; read on for more on that!

I published twelve papers in 2019, which is a few less than 2018, but still quite nice as a few were rather important for me. My first publication of the year was the description of Uroplatus finaritra, a beautiful, large species of leaf-tailed gecko, that we had collected a few specimens of on my trip to Marojejy in northeastern Madagascar in 2016 (read about that trip here). Like almost all Uroplatus species, this was published in Zootaxa. This was a really cool project for me, because U. finaritra is closely related to U. phantasticus, which was one of the geckos that got me hooked on Madagascar in the first place, and, if anything, is only more spectacular than that species. You can also read a bit about this gecko in the Mongabay article about it. 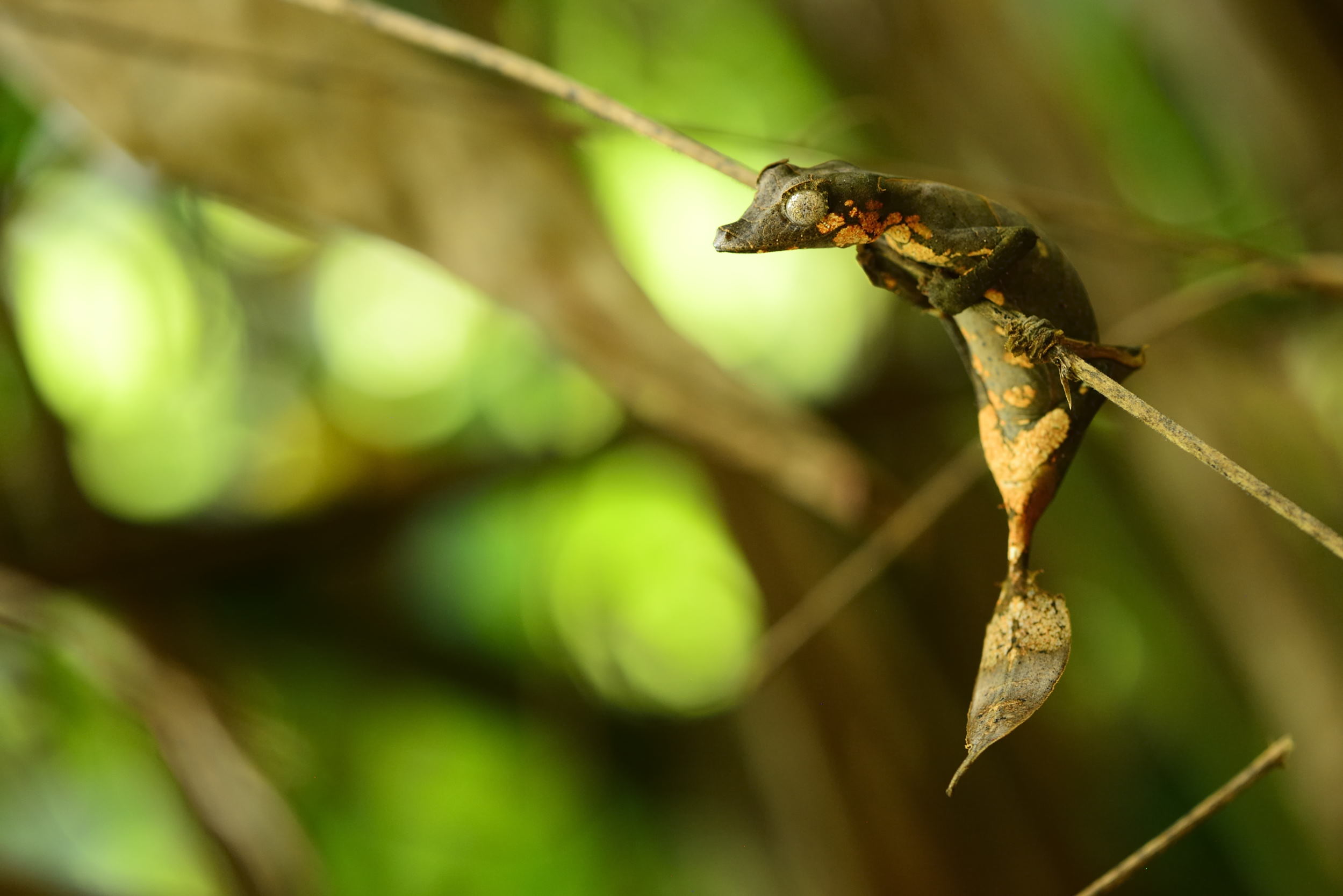 The second paper of the year was the description of the very weird skull of Xenotyphlops grandidieri, a blindsnake from Madagascar that has a family all of its own, published in the Journal of Anatomy. This paper arose from a bachelor’s project of Johann Chretien. He put days of work into getting the skull segmented, and the two of us, spent hours working on the description of the skull, which is difficult to compare to other snakes because it has a strong inflection in the middle of the snout. As supervisor, I was last author on this paper, and on Monday the 6th of January I will be giving a talk on the interesting conclusions that we took away from this study at the World Congress of Herpetology in Dunedin, New Zealand. Follow me on twitter for updates on that congress in real time! 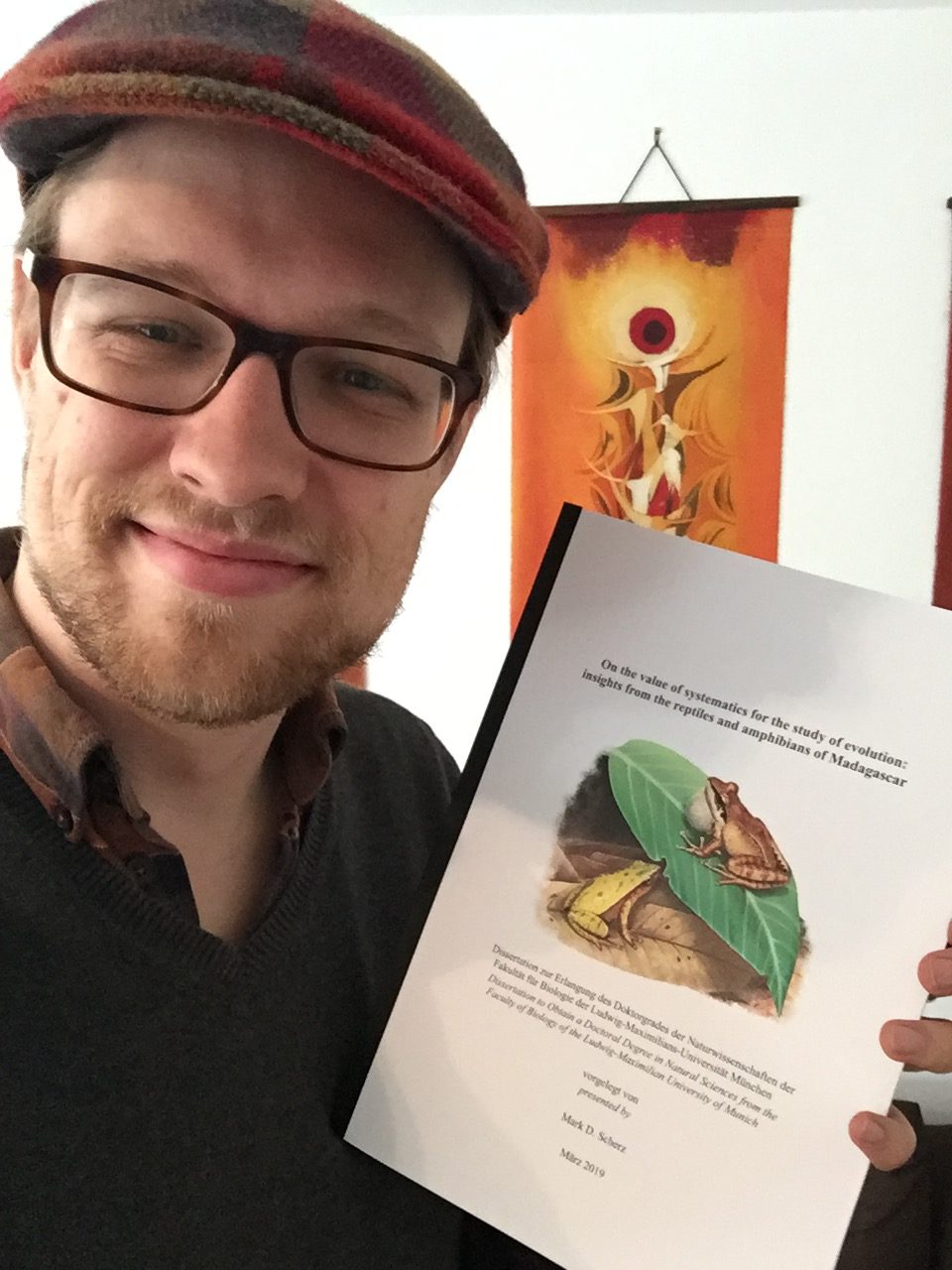 In March, my third paper of the year was published, the description of Brookesia tedi, one of the smallest chameleons (and indeed amniotes) in the world. This was the first chameleon description I have gotten to lead, and this is a really enchanting little animal. The paper was published in Zoosystematics and Evolution, which is an open access journal, so you can read it here. This was the second fastest paper I have ever published, lasting just 62 days from submission, mentioned above on the 3rd of January, to publication.

By this time, I had cobbled together my PhD thesis, writing several dozen pages and learning Adobe InDesign on the side to layout the whole thing. Soon, it was ready for submission, and I handed it in on the 21st of March. Regrettably, there then followed a rather long lull in the procession of the thesis, for there was a miscommunication among the reviewers that led to a considerable delay. 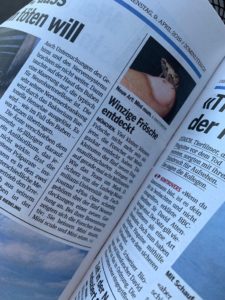 Mini in the 20 Minuten, the daily I used to read on my way to or from school in Switzerland

One week after submitting the thesis, one of the chapters was published in PLoS One, a real highlight: the description of five tiny frogs from Madagascar, including the new genus Mini and the three species Mini mum, Mini scule, and Mini ature. This got quite a lot of media attention, and has indeed just been featured as an Editor’s Pick on the PLoS One blog. I myself wrote about these new frogs here on the blog. By a happy coincidence, another of the species we described in this paper, Anodonthyla eximia, was also the 8000th amphibian added to the Amphibian Species of the World 6.0 database!

As a reward to myself for surviving this crazy period, I then took a few weeks off, and travelled to Madagascar with Dr David Prötzel and Dr Frank Glaw and their families for a mostly-holiday trip on Nosy Be. This was my first visit to that island, which is a popular tourist destination, but I was pleased to find that the Lokobe National Park is well preserved, and still completely abuzz with life. I also got the immeasurable pleasure of seeing a live Rhombophryne testudo, the type species of the diamond frogs that started my taxonomic career in Madagascar.

On our way to the harbour by tuk-tuk

Zonosaurus madagascariensis is abundant on Nosy Be

Uroplatus ebenaui is less common than U. henkeli, but perhaps even more interesting

We stayed at a small hotel that is also home to its staff after the resort. The music blasted loud enough that it could be heard several kilometres away, meaning our room was a veritable rave.

Stumpffia psologlossa, a small species with an interesting trilling call

A first for me: we saw aa very large pod of spinner dolphins (Stenella longirostris) from the boat

We spent some time at a luxury resort. A real holiday!

Uroplatus henkeli is very common on Nosy Be

Sunset from Nosy Be

A male Brookesia minima, one of the smallest chameleons in the world

Furcifer pardalis on Nosy Be can come in quite riotous colours, like this young male

In the following months, while my thesis was slowly making the rounds, I had three more papers published, describing a new gecko, a new frog, and the community composition of Stumpffia frogs on Marojejy (these are the small frogs we described 26 new species of back in 2017). I also spent some time in Braunschweig helping to teach a course on vertebrate morphology. Then, finally, the thesis came back, fortunately with the best possible mark and no changes needed, and I was free to scramble to schedule my defence. After quite a bit of nail biting, a date was finally found that was feasible, if not ideal, for all parties. So, on the 11th of July, I was able to defend my thesis, with many friends and family members in the audience. I wrote a tiny bit about the thesis and the whole thing previously, if you want to know a bit more about the breakdown of my thesis and the breakdowns I had in putting it together.

Treats for the guests

In German tradition, you receive a PhD hat with things about you and your thesis on it

August saw three more papers published, describing two new frogs and a bit of biogeography. The second of these papers was again published in PLoS One, and was the first chapter of my thesis. It focussed on the problems the IUCN Red List has with species complexes. I blogged about this paper here and over on The Conversation, because I think it is a particularly important issue that is misrepresenting the threats that biodiversity is facing today. Then, in September, I went to Milan to present at the European Congress of Herpetology. This was a really delightful meeting, with many friends, and I gave a short talk on the herpetofauna of the Comoros, which I have worked a little bit on together with Dr Oliver Hawlitshek.

My last paper truly published in 2019 was another Uroplatus species, U. fetsy from the bizarre Ankarana karst habitat in northern Madagascar. It has been a good year for leaf-tailed geckos! Again this was published in Zootaxa, and again, the paper was featured on Mongabay. To find specimens of this gecko, I went on a very brief foray into Ankarana in 2018, and luckily we managed to find a single female. 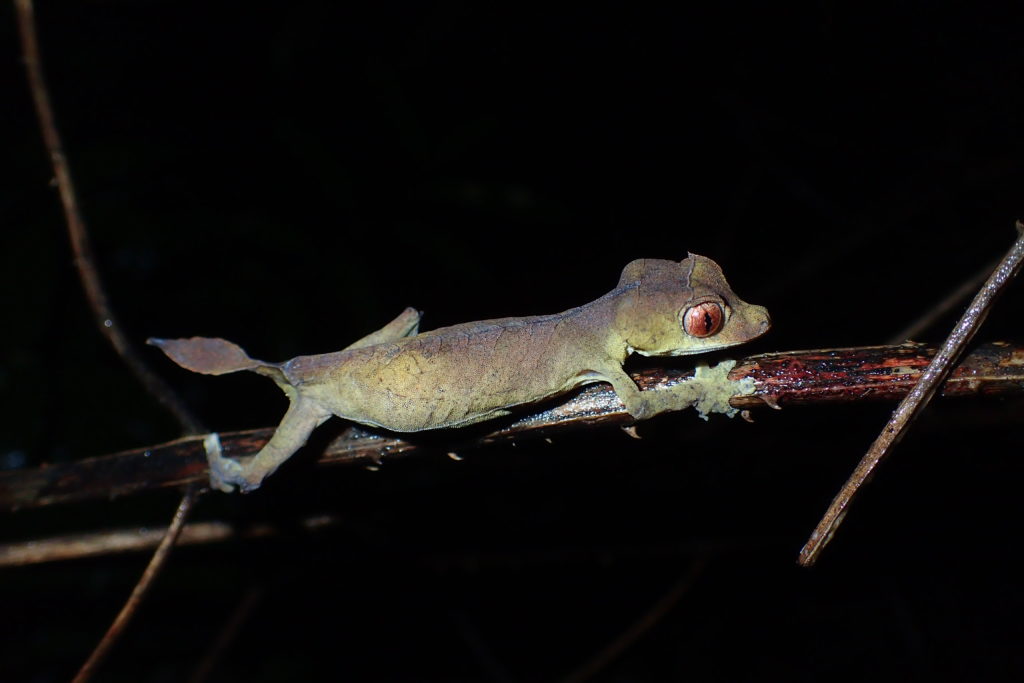 Around August I also accepted a PostDoc position in the Meyer Lab at the University of Konstanz in southern Germany. My position there started at the beginning of November, working on a variety of evolutionary and genomic questions with cichlids as a model group; a step away from herps and Madagascar to broaden my methodological repertoire and gain some important new experiences. Although it is all very new, I have already learned a huge amount, and I am looking forward to seeing what 2020 brings.

2019 wasn’t only successes and delights. I spent a large part of this year working on a paper on some interesting chameleon morphology, including some pretty intense statistical analyses and phylogenomics. It has become a paper I am rather proud of, and that numerous colleagues have contributed to. Yet, despite our high hopes for this paper, it has wound up rejected from five journals in a row, and is currently pending appeal of the fifth rejection.

But to end on a highlight: Two more papers are accepted, the first, discussing the allopatric origins of sympatric sister species of frogs on Montagne d’Ambre, is already online ahead of print in Molecular Phylogenetics and Evolution, and the second, describing several new Calumma species, is due to be published in Vertebrate Zoology in February.

Indeed, 2019 has ended on a personal highlight as well, as my partner, Ella Z. Lattenkamp, and I got engaged. A joyful way to end a very tough but rewarding year. I will be very interested to see what the next decade holds!